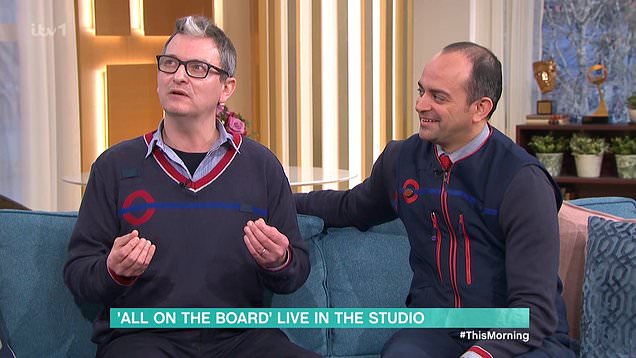 All On The Board founders Ian Redpath and Jeremy Chopra have recalled how their heart-warming messages first began.

The duo have been lighting up commutes for Londoners over almost six years, and now even have published two books compiling all their poems.

While some have been light-hearted messages about the weather, others have focused on mental health, with some inspired by campaigners like Dame Deborah James.

Kicking off Thursday’s This Morning with Phillip Schofield and Holly Willoughby, Ian and Jeremy spoke about how it all began, thanks to none other than Craig David.

‘We were both working at the station, there was a Craig David concert taking place, all these fans were coming through,’ Ian said.

‘We were going through the Craig David songs that we knew, and we were singing them quite badly to one another, and then we thought, rather than having it say “Keep right” and it was a filthy board, we rubbed it out, put our little poem on it.

Ian (L) and Jeremy are the poets behind the inspiring messages (Picture: ITV)

It all began with a Craig David concert six years ago (Picture: Joseph Okpako/WireImage)

‘Everyone was taking selfies with it, it was creating smiles and stuff.

In a recent post earlier this month, Jeremy and Ian shared how much the support has meant to them amid their popular social media posts.

Known for their uplifting messages for commuters, @allontheboard have a special poem just for #ThisMorning! ð pic.twitter.com/cUqhj87MYV

‘When we first started almost 6 years ago we thought we might make a couple of people smile, but never expected what has happened to us, to have two books out and most importantly to have saved lives with words.

‘Thank you so much to everyone who has shown us love and support by buying our new book All On The Board: Your Daily Companion.

‘You have truly kept us going in moments over the years when we have both been struggling and for that we are forever grateful.’

Their post was showered in support, with one person writing: ‘It’s going to be very tough week, but you guys always hit home with your boards.’

This Morning airs weekdays from 10am on ITV.

If you’ve got a celebrity story, video or pictures get in touch with the Metro.co.uk entertainment team by emailing us celebtips@metro.co.uk, calling 020 3615 2145 or by visiting …read more

To view this video please enable JavaScript, and consider upgrading to a web browser that supports HTML5 video Happy Valley’s Tommy Lee Royce (James Norton) has lost his psychopath traits over the past few episodes, according to a criminologist. Considered by Catherine Cawood (Sarah Lancashire) – and the nation- as a monster, the criminal has […]

Heather and Phil together again as EastEnders icons have surprise reunion

It’s a family reunion (Pictures: Instagram/Cheryl Fergison/BBC) EastEnders icons Heather Trott (Cheryl Fergison) and Phil Micthell (Steve McFadden) have reunited this week and we’re all losing our minds. The pair cuddled up for a selfie in front of Tower Bridge, which Cheryl shared for her Instagram followers. In the caption, she thanked her buddy for […]

The Brazilian says his ex-teammate was a ‘great leader’ in the dressing room (Picture: Getty) Thiago Silva admits Jorginho is going to be a massive loss for Chelsea and has suggested he will sign a new contract soon and will not leave the club in the lurch. The west Londoners have undergone a dramatic turnover […]