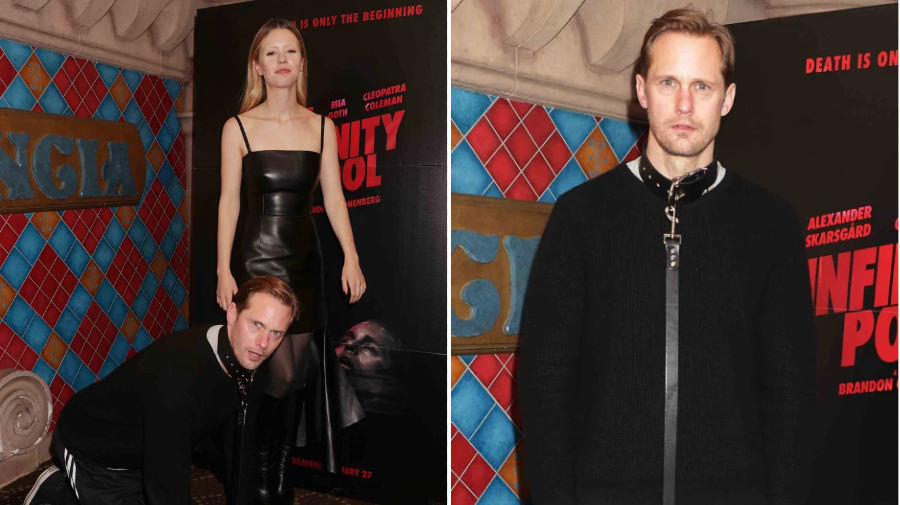 Alexander Skarsgard and Mia Goth are really putting themselves out there for their new R-rated horror Infinity Pool.

At the film’s Sundance Film Festival premiere on Monday, the acting duo got pretty into promoting the disturbing horror dubbed ‘The White Lotus for sickos’ as they donned some pretty kinky outfits.

The Northman star wore a collar and lead while Mia, who sported a leather mini-dress, was pictured at the other end of Alexander’s leash as he crouched on the floor seemingly imitating a dog.

Succession actor Alexander is known for getting his kit off on-screen, and first premiered his torso in teen vampire series True Blood circa 2010, in which he said getting naked was ‘wild and crazy and fun.’

But this time, it’s not just the abs that are getting screen time, but Infinity Pool provides a full-frontal view of Alexander’s character James Foster ejaculating while Mia’s character Gabi performs a sex act on him.

But it doesn’t stop there, oh no.

Alexander and Mia got well into the promotional side of the film with an, erm, dog lead (Picture: Dave Allocca/StarPix/Shutterstock)

Brandon Cronenberg is the man behind this new unnerving horror (Picture: Dave Allocca/StarPix/Shutterstock)

‘Fighting a naked version of myself to the death and then being breastfed by Mia … that’s not something you get to do very often as an actor,’ said Alexander, apparently thriving.

Written and directed by Brandon Cronenberg, Infinity Pool opens in a resort in a fictional country, where author James Foster (Alexander) and his partner Em (Cleopatra Coleman) have gone on holiday.

Enter Gabi (Mia) and an unnerving, sinister plot unfolds that gets very weird, very quickly, when they accidentally kill someone and find out the cost of murder on the island.

Infinity Pool was received with mixed reviews, as some critics loved the craziness while others asked whether it was all, erm, a little bit much.

IndieWire’s Ryan Lattanzio thought the latter, as he wrote: ‘Stars Alexander Skarsgärd and Mia Goth deliver terrifically unhinged performances as a failing novelist and a mysterious tour guide, and Cronenberg has absolutely no shortage of original ideas, but the whole thing feels bloodless, cold and clammy as a speculum.’

Ross Bonaime from Collider also found it hard to get past the chaos: ‘Cronenberg creates terrifying yet seductive imagery that combines extreme sexual imagery, disconcerting horror elements, and just a complete unawareness of what the hell is going on.’

Expect a lot of sex and a lot of blood (Picture: Elevation Pictures)

How to keep your cat safe in cold weather

This weather isn’t purrrfect for cats (Picture: Getty) Cats, famously, do what they want. But with the current bout of adverse weather expected to last until at least next week, it’s important that your kitty doesn’t stray too far from home and get caught out. Most cats have a good amount of fur to protect […]

Tristan Thompson’s mum Andrea’s funeral has taken place with Khloe Kardashian and Kris Jenner in attendance (Picture: Jerritt Clark/Getty Images for Remy Martin) Khloe Kardashian has supported her ex-boyfriend Tristan Thompson by attending the funeral of his mother, Andrea, in Toronto over the weekend. Andrea died suddenly on January 6 after suffering a heart attack […]