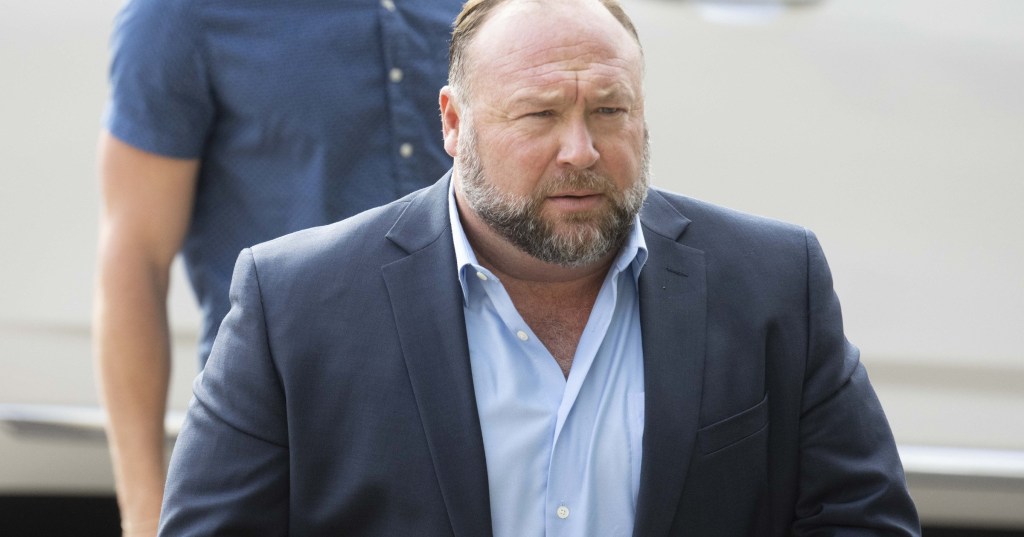 Alex Jones was ordered to pay $4million in damages to the parents of a Sandy Hook school shooting victim (Picture: REX)

Conspiracy theorist Alex Jones has been ordered to pay the parents of Sandy Hook shooting victims $4million in the defamation trial.

It is the first time the InfoWars owner was found financially liable for claiming that the 2012 school shooting was a ‘hoax’ or ‘complete fraud’ on air.

Earlier today, Attorney Mark Bankston, who is representing the parents of Sandy Hook shooting victim Jesse Lewis in a defamation trial, said in court that the House Select Committee investigating the January 6 Capitol riot requested the contents of the phone.

Lawyers for Jones accidentally gave Bankston a digital copy of the entire contents of Jones’ phone, which included some text messages and emails that were not turned over during discovery.

Bankston said he intended to comply with the request, unless he was ordered not to do so by the judge.

Judge Maya Guerra Gamble did not object to the request, but did instruct Bankston to destroy all medical records contained on the phone. Bankston told her that they had already done so.

Jones’ attorney, Andino Reynal, asked Judge Gamble for a mistrial, which she denied.

Judge Gamble told Reynal it was ‘like the 17th time’ the defense had asked for a mistrial after denying the motion.

‘The Jan. 6 committee doesn’t have any more information about what’s on that phone than I do,’ Bankston said. ‘I don’t know if it even covers the time period they are interested in.’

Alex Jones steps outside of the Travis County Courthouse, to do interviews with media after he was questioned under oath about text messages and emails (Picture: REUTERS)

He did note that the phone had text messages dating back to at least ‘late 2019.’

Jones was already deposed by the committee in January. He reportedly exercised his Fifth Amendment right against self-incrimination over 100 times.

The jury began deliberations for Jones’ defamation trial on Wednesday evening to detemine how much Jones must pay the parents of Sandy Hook victim Jesse Lewis.

Plaintiffs Neil Heslin and Scarlett Lewis are seeking $150million in damages. During his testimony, Heslin said it was ‘only way to put a stop to it, to prevent this from happening anymore.’

Chrissy Teigen and John Legend were spotted running errands (Picture: Backgrid) Chrissy Teigen has shared a picture of her baby scan with fans, after confirming her pregnancy news. The 36-year-old confirmed that she is expecting her third child with husband John Legend, 43, last week, following her miscarriage heartache in 2020. Taking to Instagram, the […]

Coronation Street spoilers: Yasmeen exiles Stu from her life over his staggering secret

Yasmeen cannot deal with Stu’s secret (Picture: ITV) Stu (Bill Fellows) gets a nasty shock in upcoming Coronation Street episodes when his ex-wife Lucy (Lynda Rooke) turns up at Speed Daal to order him to stay away from Bridget (Beth Vyse), his daughter. She also drops a massive bombshell secret from his past, about a […]