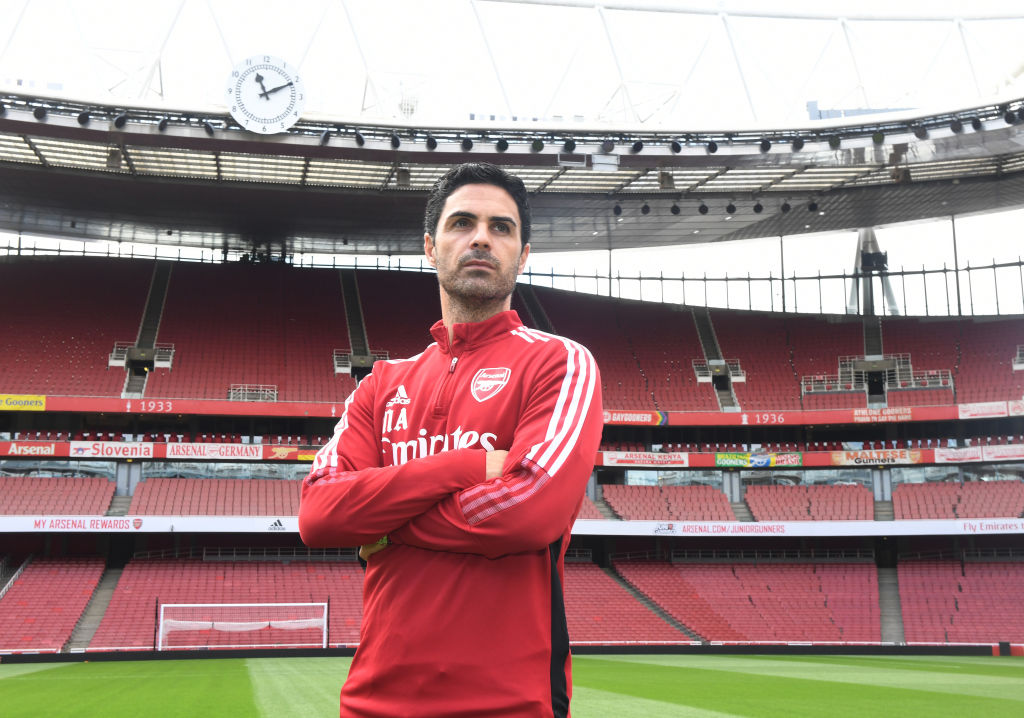 Arsenal are looking to spend heavily this summer (Picture: Getty)

Arsenal are on the verge of concluding their first major signing of the summer in the form of Porto’s Fabio Vieira and have already identified their next priority target.

The Gunners are set to confirm the arrival of the Portugal Under-21 international within the next few days after the highly-rated playmaker arrived in London for his medical on Friday.

According to The Athletic, Mikel Arteta will now focus his attention on bolstering his defensive ranks with the addition of a of a left-sided centre-half.

The Gunners are also hopeful of securing deals for Manchester City striker Gabriel Jesus, Leicester City midfielder Youri Tielemans and Leeds United winger Raphinha, but a player capable of competing with Gabriel Magalhaes is next on the agenda.

The Brazil international impressed last season and was a near ever-present, but with European football on the agenda next term, Arteta feels the Gunners are short in that department while Gabriel himself is said to be a target of Juventus.

Arsenal have reportedly seen an initial €30 million bid for Ajax’s Lisandro Martinez rejected, but are expected to return with an improved offer for a player who is keen to join.

Arsenal are still confident of sealing the signing of Gabriel Jesus from Manchester City (Picture: Getty)

Arteta believes Martinez, 24, could act as cover for Kieran Tierney, who frustratingly missed the run-in last season after suffering another injury set-back.

Arsenal have been linked with Tierney’s Scotland international teammate, Aaron Hickey, but are facing competition from a number of Premier League clubs.

Arteta is also said to be interested in Oleksandr Zinchenko, on account of his versatility, but the Ukraine skipper’s preference is to remain at City and sign a new contract.

Erik ten Hag, meanwhile, had earmarked Martinez as one of the players he had hoped to bring with him from Ajax to Manchester United, but the Dutchman is enduring a frustrating start to his rebuilding project.

United are struggling to agree a fee with Barcelona for Frenkie de Jong, while Jurien Timber has opted to remain with Ajax.

The centre-half is regarded as one of the best young defenders in European football but does not want to sacrifice the guarantee of regular first team football having broken into Louis van Gaal’s Netherlands national team ahead of November’s World Cup.

MORE : Everything you need to know about incoming Arsenal signing Fabio Vieira as Porto confirm transfer

For more stories like this, check our sport …read more

Gary Lineker is one of England’s most lauded ever forwards. Former England footballer and Match of the Day host Gary Lineker has claimed he suffered racial abuse as a child and as a player. The 61-year-old, who is white, says that his ‘darkish skin’ meant that he was called racial slurs by both school pupils […]

The BBC had to release a statement in response to the complaints. (Picture: BBC) The dark storyline which has focused on the rape of Ben Mitchell (Max Bowden), and its devastating aftermath, has divided viewers over the last couple of months. With many praising the harrowing performances of Max, Aidan O’Callaghan (who plays attacker Lewis) […]