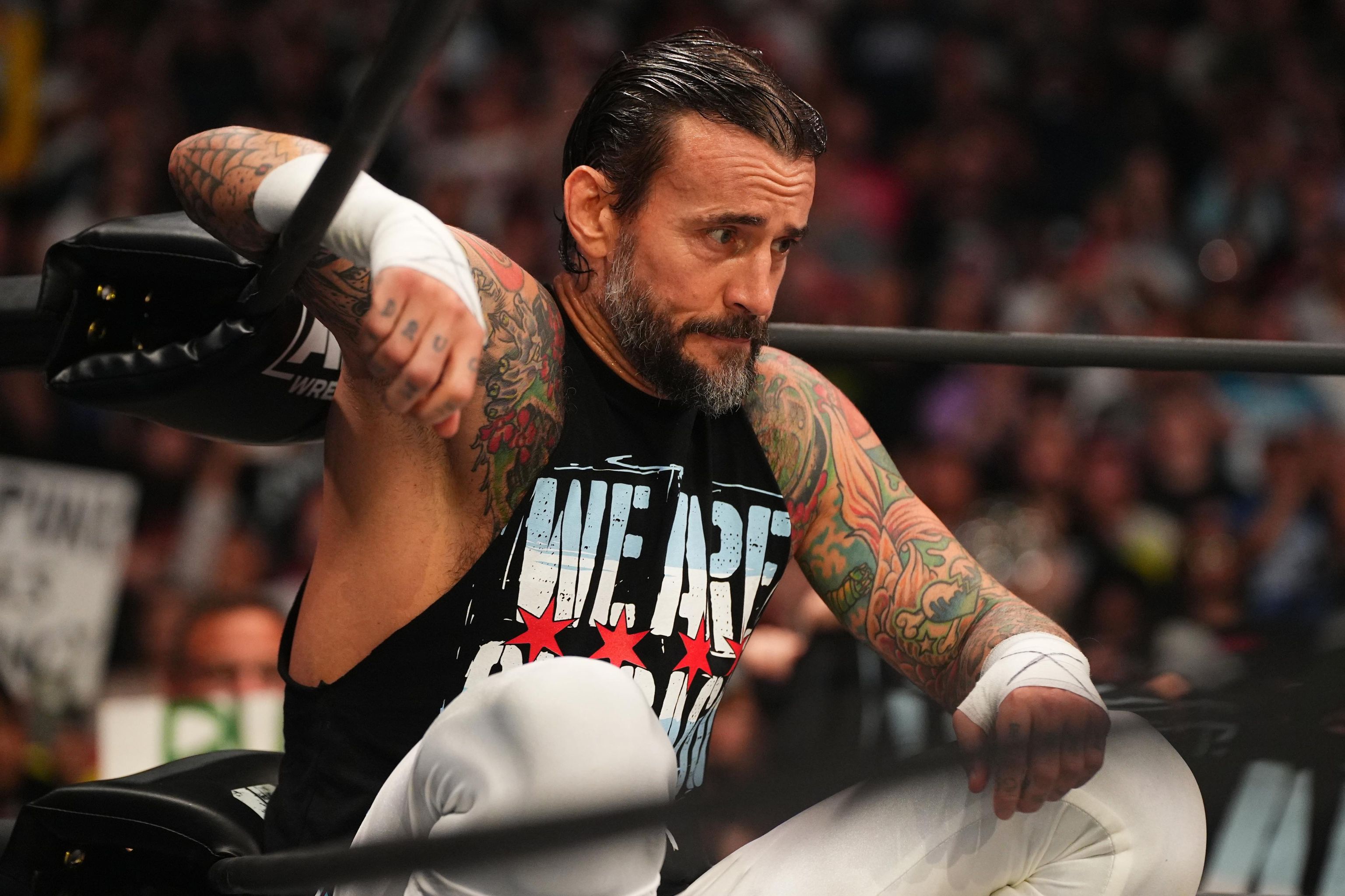 CM Punk hasn’t been seen on screen since All Out (Picture: AEW)

The Elite mocked CM Punk on AEW Dynamite the same week Kenny Omega urged fans to ‘move on’ from their backstage altercation at All Out.

Back on September 4, after winning the AEW World Championship, the WWE legend used the media scrum to launch an astonishing verbal attack on the company’s management as All Elite Wrestling owner Tony Khan sat by his side, accusing ‘irresponsible’ executive vice presidents for spreading ‘lies and bulls**t’ to the press.

The wrestler was then reportedly involved in an altercation with The Elite – Kenny Omega, and Matt and Nick Jackson, who serve as EVPs – after Punk hit out at Matt , with Punk’s friend Ace Steel allegedly throwing a chair at Matt’s brother Nick and biting Omega.

While Punk is yet to be seen on All Elite Wrestling television since then, he was referenced heavily as the company held a show in his hometown of Chicago on Wednesday night.

During the second match in their best of seven series against Death Triangle, The Elite made some big nods, most obviously with Omega hitting Punk’s signature Go 2 Sleep move, and biting one of his opponents.

Meanwhile, Matt Jackson hailed to hit a Buckshot Lariat, which was a not so subtle reference to Punk failing to hit the same move when he faced Hangman Page at Double or Nothing earlier this year.

This all comes after Omega told Sports Illustrated that he wanted fans to ‘let it go’ and move away from the drama, although his actions on Wednesday have already sparked plenty more conversations.

He said: ‘I encourage people to move away from it because there is no information to be released. Though I cannot talk about it, I do want the fans to know I still want the best for pro wrestling.’

After All Out in September, Sports Illustrated reported that the punishments would involve ‘suspensions for every person involved’, including Matt and Nick Jackson, Omega, Pat Buck, Christopher Daniels, Brandon Cutler and Michael Nakazawa.

Sources were quoted by the publication as saying that Punk and Ace Steel would either both be among those suspended, or could leave the company in the near future.

Steel has since departed, while Punk – who was injured at All Out and would have had to take time off to recovery – is yet to appear on screen, with his future unclear.

The actions on screen this week have sparked speculation from some fans that he could made a sensational return to the company, although this is certainly not confirmed or even based on any reports.

Kenny Omega had told fans to move on from the controversy (Picture: AEW)

Although boss Tony has repeatedly refused to comment on the matter, AEW’s Chris Jericho recently appeared on the Howie Mandel Does Stuff podcast and confirmed ‘there was a locker room fight’.

The victim’s dad was sent the explicit files a day before his daughter’s birthday (Picture: Getty Images) A mum and son plotted to send intimate photos and footage of his ex-girlfriend to the woman’s dad a day before her birthday to ‘give her drama like she loves’, a court heard. Matthew Cooper-Collyer, 23, had not long […]

Kylian Mbappe remains a target for Real Madrid (Photo by Wu Zhizhao/VCG via Getty Images) Manchester City legend Vincent Kompany has told Paris Saint-Germain superstar to reject a move to Real Madrid in favour of joining his former club. The Frenchman was widely expected to join the La Liga giants last summer before a remarkable […]

Emmerdale spoilers: Victoria and David split after he frames her in crime twist?

Victoria walks away (Picture: ITV) David’s (Matthew Wolfenden) hairbrained scheme to protect his driver’s licence over his romance will have dire consequences for his future with Victoria (Isabel Hodgins) in Emmerdale. His fraudulent actions may leave her with no choice but to walk away from him for good. The reality of his stupidity in secretly […]