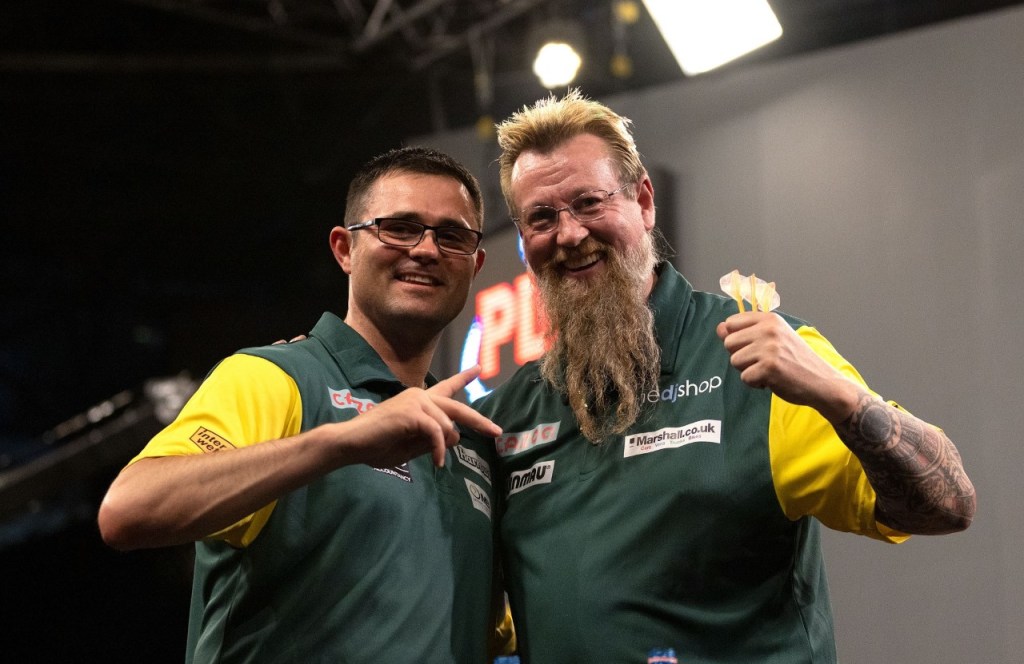 The Heat and the Wizard are World Cup winners (Picture: Kais Bodensieck/PDC Europe)

Simon Whitlock has tipped Damon Heta to be the next world champion after the Australian pair beat Wales to win the World Cup of Darts for the first time.

The Aussie pair downed tournament favourites Gerwyn Price and Jonny Clayton 3-1 in the final, having picked up impressive wins earlier on Sunday over England in the semis and Belgium in the quarters.

Whitlock has been an ever-present since the first PDC World Cup of Darts in 2010, famously losing a nail-biting final to England back in 2012 and he has finally got his hands on the trophy.

The Wizard was full of praise for Heta but also had an emotional word for former World Cup partner Kyle Anderson who tragically died last year.

‘It’s life-changing, I’ve dreamt about this moment my entire life and I’ve finally got there and to do it with a good pal and a great dart player.

‘I wish I’d done it with Kyle before, but Kyle’s not around anymore and Damon’s taken the responsibility. He’s amazing, I love this guy, he’s the best player on the planet right now.’

Whitlock even made a bold prediction for the Heat, saying: ‘This guy is on fire, he’s going to be the next world champion, I guarantee that.’

Heta added: ‘Absolutely stoked for this guy, stoked for Australia with all the support back home.

‘Everything we sacrifice to be here and it’s in the bag baby!’

World Cup ever-present Simon Whitlock finally gets his hands on the World Cup of Darts trophy!

With Heta alongside The Wizard, Australia finally rule the world of darts ð¦ðº pic.twitter.com/rLOzk9Wezb

The Welsh pair won the title in 2020 and while they were gutted to lose out this time, Price had some kind words for the new champions.

‘We weren’t at our best in the final but Simon and Damon played fantastic,’ said the Iceman.

‘I said to Jonny at the start of the tournament: “That’s the final”. I predicted we would win but I was wrong on that one, but fair play to them.’

A man with an anti-Donald Trump bumper sticker apparently hearing ‘voices in his head’ rammed his car into a store selling memorabilia for the former president. Sean Flaherty, 46, crashed his Volkswagen Jetta into the New England for Trump souvenir store in Easton, Massachusetts, shortly after 5pm on Thursday, according to police. Surveillance footage of […]

To view this video please enable JavaScript, and consider upgrading to a web browser that supports HTML5 video A UK charity has launched a program to provide thousands of iPads to visually impaired children around the country. Following a successful pilot scheme last year, the Tech for All program from the charity Guide Dogs is […]