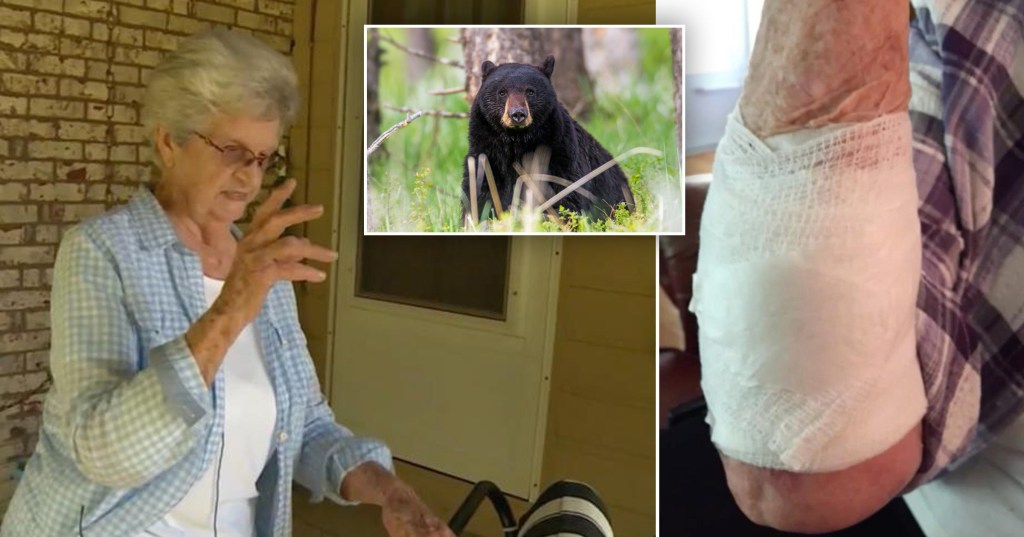 Altha Williams (left) fended off a bear using a lawn chair and emerged with just a scratch (Pictures: WVLT/Getty Images)

A 90-year-old woman attacked by a bear while sitting on her front porch managed to fend it off using her lawn chair.

Altha Williams was relaxing at her home in Sevierville, Tennessee, on Wednesday when the black bear approached her – with its three cubs nearby.

‘I was just sitting here, hadn’t been here more than two or three minutes. Evidently it heard me. It just made a lunge at me,’ Williams told WVLT.

Williams said the bear’s ‘face was right in my face’ when she used a lawn chair to stop it from getting closer to her.

She emerged from the encounter with just a scratch on her arm. She was treated at a hospital for the wound and came out with a bandage around it.

‘I’ve been praising the Lord ever since then, because I may not be here,’ said Williams.

Williams said she has encountered other bears at her home by Smoky Mountains National Park.

‘Last year I had a bear with three cubs,’ she said. ‘It could have been the same bear, but it hadn’t ever bothered me.’

She said that bears have run away from her in the past.

‘They’re afraid of you, so this is really unusual,’ she said of her latest incident.

Williams acted just as she should have, according to Tennessee Wildlife Resource Agency spokesman Matt Cameron.

‘The way she responded was exactly what we tell people to do,’ Cameron told the TV station. ‘To get big, yell at them, make noise. To intimidate them. Pat on the back for how she responded; it very well could have saved her life.’

The bear that recently attacked Williams then made its way to her neighbor, who responded more aggressively.

‘After the mother bear swatted at the victim, it left that area and, from what we are told, it charged another neighbor who shot it,’ Cameron said. ‘Once that happened, there was no choice but to euthanize her.’

The Tennessee Wildlife Resource Agency’s protocol is to euthanize bears that have contact with humans in residential neighborhoods and other populated areas.

Boris Johnson’s former ethics adviser said he quit because he was asked to consider measures that ‘risk a deliberate and purposeful breach of the ministerial code’. Downing Street has published Lord Geidt’s resignation letter following his surprise departure last night. Geidt said he was put in an ‘impossible and odious position’ over advice relating to the […]

Khloe Kardashian sobs over Tristan Thompson’s baby betrayal as she confirms split: ‘An additional slap in my face’

Khloe Kardashian broke down after learning of Tristan Thompson’s latest betrayal (Pictures: Backgrid/Getty) Khloe Kardashian confirmed the end of her relationship with Tristan Thompson once and for all, following his paternity scandal. After spending the majority of season one of the Kardashians raving about their reunion and life with their daughter True, last week’s episode […]

Newborn baby ‘falls from top of escalator in Primark’

It happened at Primark in Romford (Picture: Google) Shoppers in Primark were horrified when a newborn baby reportedly fell down an escalator from the top and began screaming. Staff rushed to help during the incident on June 20 in Romford, east London. It is not clear whether the baby was injured, or how seriously. One […]