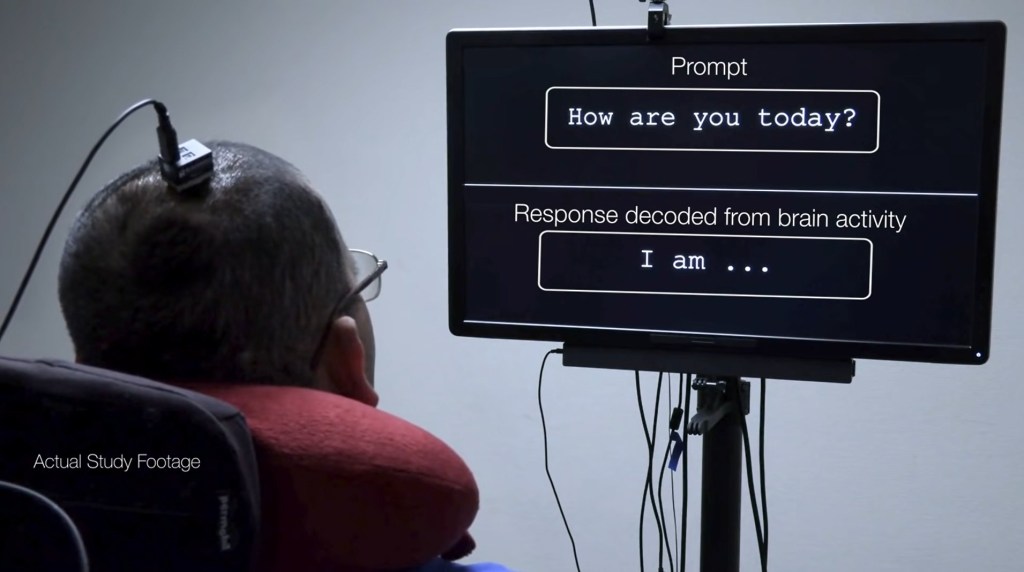 The 67-year-old ALS patient could communicate at a rate of 62 words a minute (Picture: Todd Dubnicoff, Ken Probst / UCSF)

A 67-year-old ALS patient has broken speed records for using a brain implant to communicate.

The implanted device uses neural signals to detect the words she is trying to say, conveying them to a computer screen.

A team of researchers at Stanford University published a paper this weekend claiming their volunteer smashed previous records by using a brain-reading implant to communicate at a rate of 62 words a minute.

Identified only as ‘subject T12’, 67-year-old ALS patient was three times faster than the previous record.

Each year, thousands of people lose the ability to speak due to stroke, accident, or disease.

With further development, the approach described in this study could one day enable these people to fully communicate. Now, brain interfaces could let paralyzed people speak at almost normal speeds.

People without speech deficits typically talk at a rate of about 160 words a minute.

The subject of the study lost her power of speech to ALS, which causes progressive paralysis, eight years ago.

While she could still make sounds, her words had become unintelligible, needing her to use a writing board or iPad to communicate.

With the brain implant, the woman has been able to rapidly communicate phrases like ‘I don’t own my home’ and ‘It’s just tough’ at a rate approaching normal speech.

Previous studies with brain implants had successfully translated a paralysed man’s thoughts to text with 94% accuracy.

Brain implants were even found to reverse symptoms of Parkinson’s disease in experimental studies.

Brain-computer interfaces (BCIs) can restore communication to people who have lost the ability to move or speak.

In recent years, BCI technology has drawn the attention of tech companies that hope to commercialise it, including Elon Musk’s Neuralink Corp., Kernel and Facebook Inc.

MORE : Cyborg eye implant could one day restore sight by linking directly to the brain

High levels of progesterone can slow down the digestive system leading to constipation (Picture: Getty) Do you ever struggle to go for a poo just before your period is due to start? Well, don’t worry, it’s normal. Getting constipation before you are due on can be pretty uncomfortable, but it is actually a pretty common […]

Shazia Hussain was the latest candidate to leave the process after an astonishing mistake (Picture: PA) Lord Alan Sugar let go of a fifth candidate in Thursday night The Apprentice episode and this time it was London-based technology recruiter Shazia Hussain.  The budding business partners and entrepreneurs were tasked with branding an electric motorbike and […]

Michaela Coel launches £10,000 filmmaking mentorship challenge after reflecting on ‘never seeing a black woman in a director’s chair growing up’

The actress and writer has teamed up with the BFI and BMW to offer her mentorship to five shortlisted filmmakers (Picture: David M. Benett/Chantel King/Dave Benett/Getty Images for BMW) Award-winning screenwriter and actress Michaela Coel is launching a tempting challenge for up-and-coming UK filmmakers, giving them the chance to be mentored by her and win […]