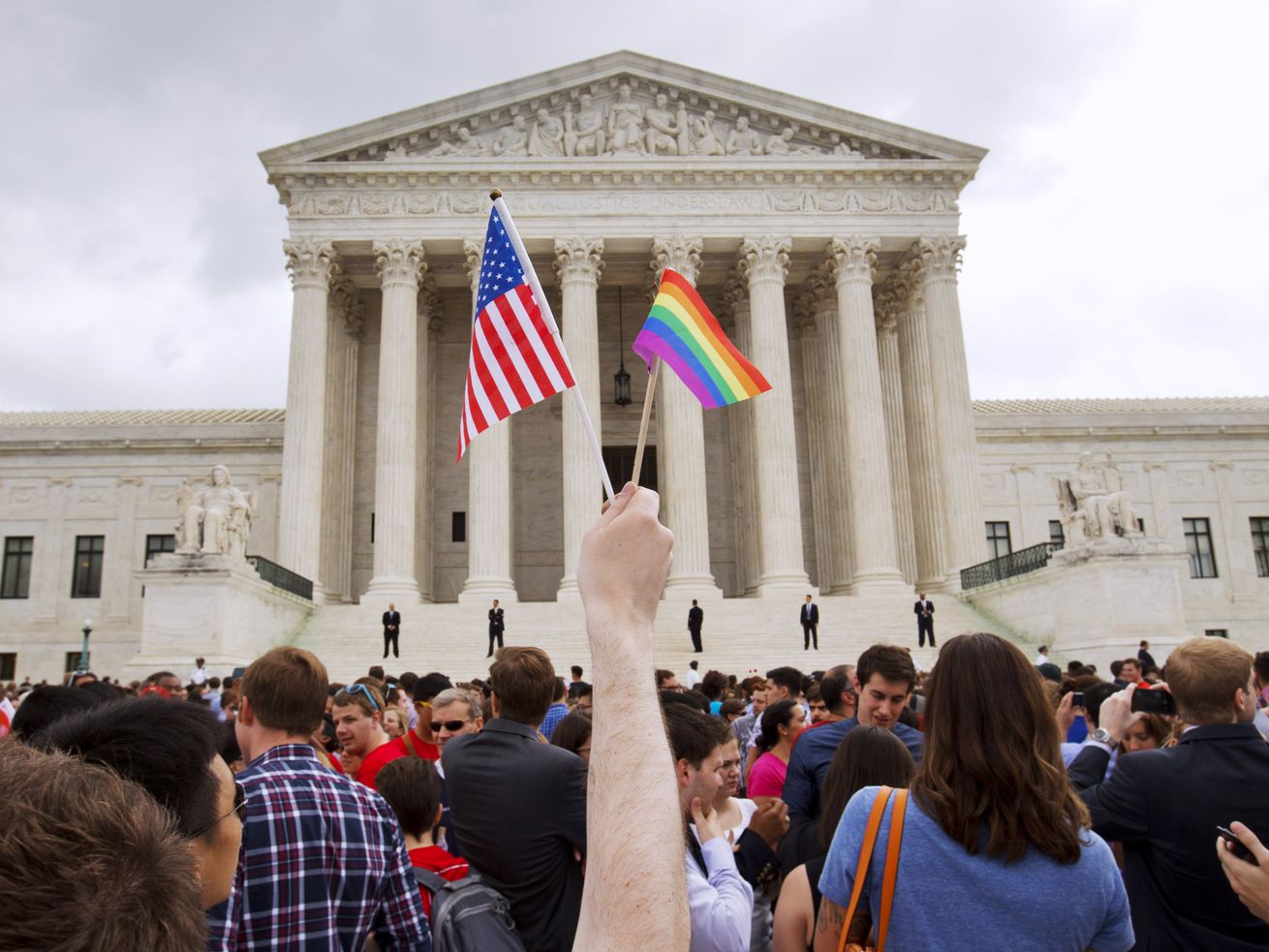 A crowd celebrates outside of the Supreme Court in Washington after the court declared that same-sex couples have a right to marry anywhere in the U.S on June 26, 2015. | Jacquelyn Martin, Associated Press

People of faith, like Americans in general, have grown more supportive of same-sex marriage in recent years.

SALT LAKE CITY — The Supreme Court’s ruling five years ago in favor of same-sex marriage sent shock waves through religious communities. Faith leaders who opposed the decision anticipated societal decay, lawsuits against churches and a growing inability to live according to their beliefs.

Five years on, many of their fears haven’t been realized. Houses of worship are still allowed to refuse to host same-sex weddings and pastors retain the right to condemn the push to expand LGBTQ rights in the public square.

However, pastors were right to predict a surge in lawsuits. Friction between LGBTQ rights and religious freedom protections has certainly increased since 2015 and the question of how to balance the two has been addressed multiple times in Congress and before the Supreme Court.

The latest research on religion and LGBTQ rights shows that, in the aftermath of same-sex marriage legalization, many people of faith have grown more interested in finding a way to protect both gay couples and religious communities. And that’s not the only way that religious views on related issues have evolved.

Like Americans in general, people of faith have grown more supportive of same-sex marriage since 2015. It’s now more common for religious leaders to urge their congregations to treat members of the LGBTQ community with respect.

Additionally, surveys taken over a longer time period show that people of faith are more likely today than in the past to believe their church thinks homosexual activity is OK.

“The perceived acceptability of ‘homosexual behaviors’ has changed radically,” according to new research from Paul A. Djupe, a political scientist based at Denison University in Granville, Ohio.

In 2007, 63% of evangelical Christians assumed that their house of worship forbid homosexual behaviors. Today, just 34% of evangelicals believe that’s the case.

Djupe observed similar shifts among Catholics, Black Protestants and other people of faith. That’s surprising since there have been few notable church policy changes related to LGBTQ rights in recent years, he told the Deseret News in an interview this week.

“There’s been tinkering around the edges” of denominational rules, but no major shifts in teachings on homosexuality and same-sex marriage, he said.

Rather than stemming from formal policy shifts, people’s assumption that their church has become more accepting of homosexual activity is likely related to faith leaders’ growing hesitancy to discuss the topic, Djupe said.

“Because (gay marriage) has become such a hot-button topic and public opinion about it as changed so much, conflict-averse clergy are probably leaving some of their opinions …read more

Pfizer shares soared as much as 7.2% on Wednesday after the company announced positive early-stage trial results for its coronavirus vaccine. The BNT162b1 drug successfully created antibodies in all participants receiving 10, 30, or 100 microgram doses. Those taking two of the 10 or 30 microgram doses created between 1.8 and 2.8 times the antibodies […]

Just over half of Americans have a job right now

The ratio of Americans employed versus the total work-eligible population is the lowest it has been since 1948, according to data from the Federal Reserve Bank of St. Louis. The stat is just one of many indicators that the US is grappling with record-high unemployment resulting from the coronavirus pandemic. Unemployment stimulus checks are set […]

BlackRock said US stocks will be sensitive to the upcoming presidential election in November and as the impact of fiscal and monetary policy stimulus measures disappear. In a 2020 mid-year outlook, BlackRock said the US election will take place against the most “tumultuous domestic backdrop since 1968,” and the result will be “consequential for markets.” […]