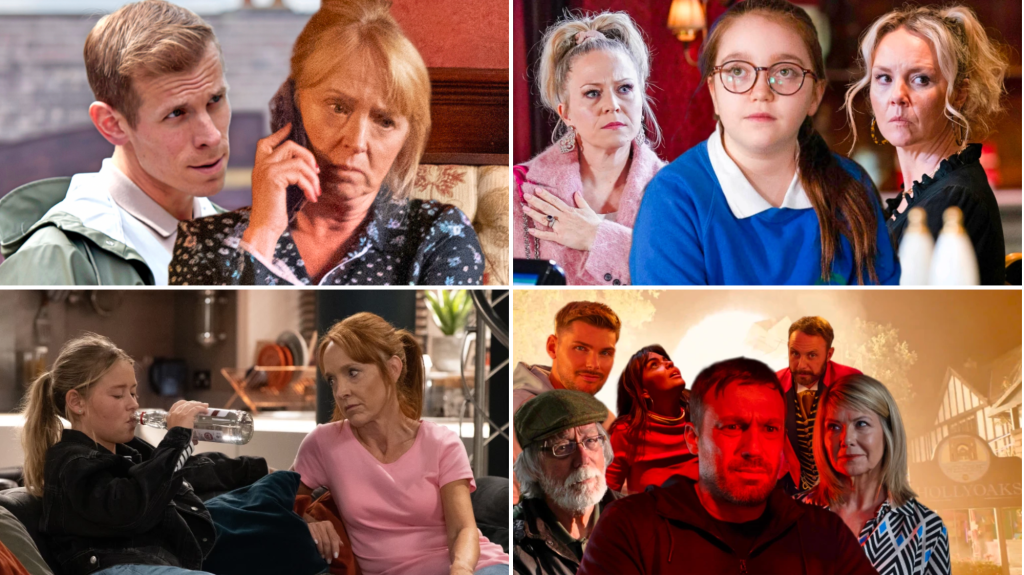 Shock twists aplenty in a week that could very well change the landscape of our favourite serial dramas (Picture: ITV / BBC / Lime Pictures)

Expect both literal and metaphorical explosions in our upcoming visits to the land of soap, as chaos reigns supreme in all four of the nation’s biggest serial dramas.

It’s all kicking off in Hollyoaks next week, as Silas Blissett takes his final revenge on the McQueens against the backdrop of a carnival, which sets the scene nicely for all hell to break to loose.

Expect death, tragedy and a few twists to go along with it in a week that can only be described as unmissable. If you haven’t tuned into Hollyoaks in a while, now is the time to start watching again.

Over in Coronation Street, Jenny Connor is worried sick when beau Leo disappears following a showdown with the devilish Stephen Reid, and scheming Sandra is up to her tricks in Emmerdale once more, attempting to swindle Liv Flaherty out of all her money.

Metro.co.uk has handpicked 25 of the biggest moments to come, so if you’d like your soap appetite whetted a bit more then simply don’t stop reading.

1. The police start questioning over the shooting from the previous week.

2. Leo is on a mission to prove that scheming Stephen is a liar, and he overhears a conversation between he and Gabrielle. Stunned, Leo subsequently confronts Stephen, revealing that he knows all about how he intends to get the equity from Audrey’s house. A confrontation ensues on the factory gantry, as Leo taunts him, threatening to call Audrey, but how will Stephen react?

3. Teddy, Leo’s dad, later calls in the pub and is surprised to see Jenny behind the bar. Jenny explains how Leo left for Canada without her. Teddy asserts she’s only herself to blame.

4. The Baileys are thrilled as Dee-Dee arrives home from America. When James shows her the letter from County offering him a paltry final pay-off, Dee-Dee calls the club and after explaining that she’s a solicitor, demands a meeting. Will Dee-Dee be able to push for a better deal?

5. During Evelyn’s first shift at the charity shop, Joy lays down the ground rules while Evelyn is forced to bite her tongue, before revealing that she’s off to Cornwall for a few days.

6. When Bernie accidentally smashes the first golf trophy Aadi ever won while cleaning, Dev’s apoplectic and sacks her on the spot. Desperate for cash, Bernie finds Fern’s card and gives her a call.

7. Yasmeen returns to discover that Speed Daal has closed because of Stu, but she assures him that they will rebuild the business and clear his name – no matter what it takes.

The escapologist was left paralysed after falling 30 feet (Picture: REX/Jonathan Goodwin/Instagram) Jonathan Goodwin has said the failed stunt which left him with life-changing injuries wasn’t his fault. The TV star was filming an episode of America’s Got Talent: Extreme last year when his act went tragically wrong, resulting in him becoming paralysed and needing […]

The Crystal Palace star didn’t seem best pleased with a post from the right-back (Pictures: Getty) Wilfried Zaha has hit back at Reece James in a now deleted social media post after the Chelsea defender posted a somewhat inflammatory message of his own following Saturday’s dramatic win. Crystal Palace took an early lead at Selhurst […]