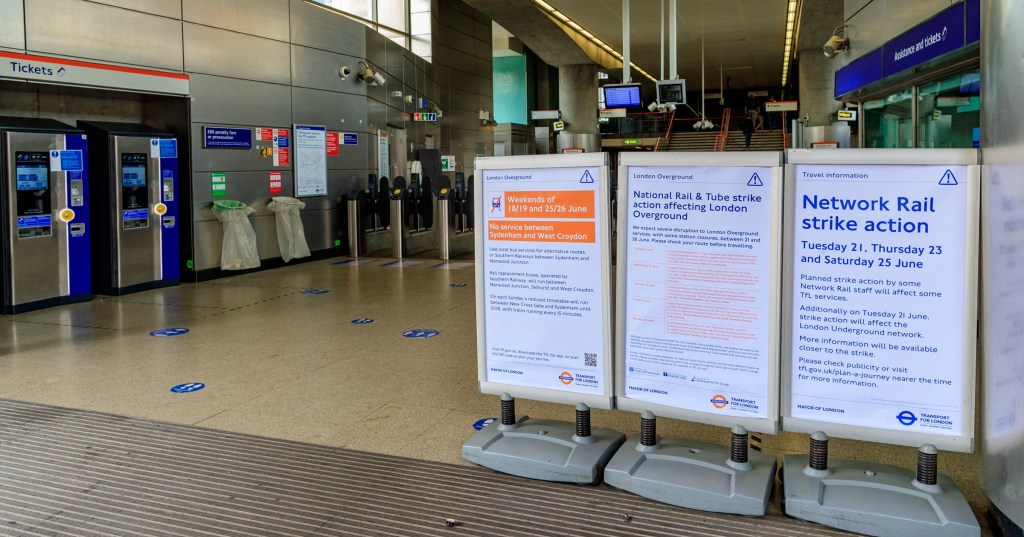 Last-gasp talks are not expected to stop the strikes – but a it ‘is resolvable’ (Picture: PA/EPA)

Crunch meetings today could still avert rail strikes which are set to throw the UK into transport chaos, an industry leader has said.

Further discussions are set to take place before a mass walkout tomorrow, Thursday and Saturday – though trains are expected to be disrupted for the whole week with a special timetables coming in this evening.

Ministers have been blasted for refusing to take part in the talks between the Rail, Maritime and Transport (RMT) union and industry bosses – as the most disruptive rail strike in 30 years looms.

But transport secretary Grant Shapps yesterday warned the country’s biggest rail union that the walkout would be a ‘huge act of self-harm’, which could jeopardise the future of the industry.

Now the chairman of the Rail Delivery Group has said the strikes could still be averted – but only if unions accept that ‘outdated’ working practices must change.

Steve Montgomery told the BBC: ‘We are now meeting them again tomorrow. We do want to offer them something but we have to have reform.

‘We have to understand how far the trade unions are willing to work with us and take the industry forward.’

Chaos is expected on the railways from tomorrow – with Glastonbury Festival one of the events set to be impacted (Picture: EPA)

Praising rail staff but calling for an end to the crisis by bringing in ‘modern work practices’, he continued: ‘There is room for compromise.

‘We have got to work together, but we can resolve it. This is resolvable.’

Most observers do not expect talks to halt the strikes.

Yesterday Mr Shapps dismissed a call from the RMT for the Government to intervene as a ‘stunt’, saying the union had been ‘gunning’ for industrial action for weeks.

But the Government have also been accused of wanting the strikes to go ahead and doing little to resolve the dispute over pay, conditions and job losses.

Labour called for ministers to step in to prevent the network ‘grinding to a halt’.

London Underground workers will also go on strike tomorrow, while there are fears that teachers and doctors could join them – alongside rubbish collectors, barristers and post office workers.

RMT general secretary Mick Lynch said the union had no choice but to act after the train operators had still not made a pay offer when broke up on Thursday.

‘We have to fight this because we haven’t had any pay rises, we are faced with thousands of job cuts and they want to rip up our terms and conditions in a form of hire and re-hire that is internal to the railway,’ he told Sky News’s Sophy Ridge on Sunday programme.

‘If there is not a settlement we will continue our campaign. I think there are going to be many more unions balloting …read more

Thomas Tuchel plans to transform Chelsea’s attack (Photo by Robin Jones/Getty Images) Thomas Tuchel has asked Todd Boehly to complete deals for Raheem Sterling and Ousmane Dembele as the German plans to transform Chelsea’s attack next term. The Blues are yet to make a signing so far this summer and the upheaval off the pitch […]

Tamara Korpatsch (left) is ‘very sad, disappointed and angry’ with Harmony Tan (Picture: AP/Getty) Tamara Korpatsch has labelled her doubles partner Harmony Tan ‘unprofessional’ in a furious rant after the latter withdrew from the doubles after her shock win over Serena Williams at Wimbledon. World No.115 and Wimbledon debutant Tan stunned the tennis world with […]

Research reveals how much extra screen time we logged during Covid

Both adults and kids saw their screen time increase during Covid-19 (Credits: Getty Images) Children aged between six and 10 had the biggest daily increase in screen time during the Covid-19 pandemic, new research suggests. But increases were seen in all ages, including among adults, the study found. According to Anglia Ruskin University (ARU) scientists, […]