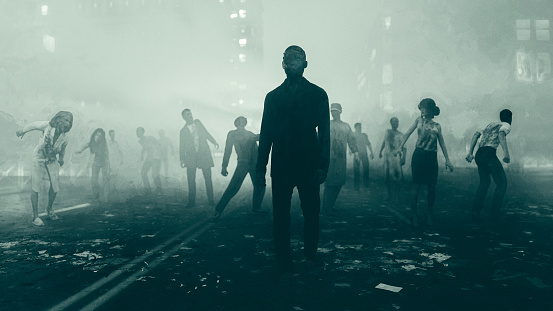 You can still get your undead fix now The Walking Dead is ending (Picture: Getty Images)

The Walking Dead has finally come to an end after running for 12 years.

The AMC series follows a group of survivors in a post-apocalyptic world inhabited by the undead.

It’s been an epic journey to reach this point with our group of survivors experiencing heartbreak, loss, and sometimes, hope to survive in a world full of the undead.

But while it may be sad the series is leaving the air with the final episode airing on Disney Plus today, there are still plenty of shows out there for you to get your undead fix.

Here are the top zombie TV shows you can stream right now in the UK.

We often think of zombies as stumbling ghouls or rabid monsters, but this Netflix series challenges both of those tropes.

Her secret is guessed by her boss, Dr. Ravi Chakrabarti, who helps her along her journey as the number of zombies in Seattle increases and a private marshall company wreaks havoc.

All Of Us Are Dead

Where would you want to be when the zombie apocalypse begins? After watching this show, probably not a school.

All Of Us Are Dead is a South Korean series that sees a group of students attempt to escape their high school as a zombie outbreak begins.

It is based on the Naver webtoon of the same name by Joo Dong-Geun and a second series has been confirmed following the release of the wildly successful first series this year.

Syfy series Z Nation proved an instant hit, spawning five series before it was cancelled in 2018.

The show begins three years into a zombie apocalypse as a group attempts to transfer Murphy (Keith Allan), an inmate at Portsmouth Naval Prison in Maine, to the last known functioning Centre for Disease Control research lab in California.

Murphy was the only survivor of a vaccine test prompting his fellow inmates to believe he may be the key to the continuation of the human race and the end to the zombie pandemic.

The series follows Rose (Jaime King) who is separated from her daughter, Anna (Zoe Marlett) during the zombie apocalypse.

She embarks on a harrowing journey to find her, joining forces with a …read more

Jay is determined to help Lola (Picture: BBC / Jack Barnes / Kieron McCarron) As the traumatic storyline showing Lola Pearce (Danielle Harold) dealing with a terminal brain cancer diagnosis continues on EastEnders, it’s a difficult time both for Lola and for the people who love her.  Ben (Max Bowden) is doing everything he can […]

Left to right Helen Lowe, 52, Liz Rogers, 62 and Colette Jones, 61, were not impressed (Picture: Liverpool ECHO) When you go to a five star hotel you expect the five star treatment. So a group of women who stayed at a five star TUI hotel were left far from impressed when they were served […]