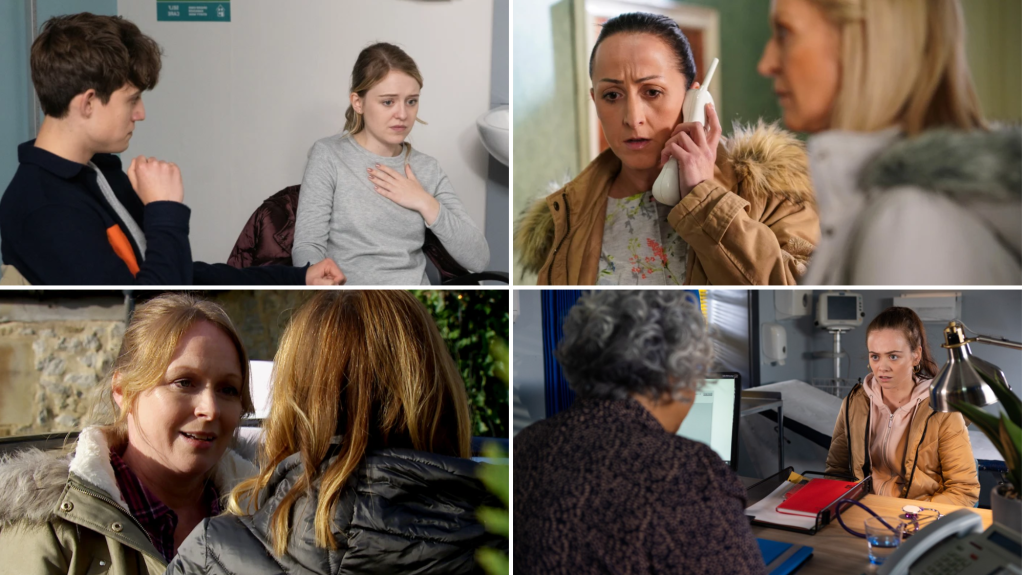 Tissues at the ready, soap fans! It’s going to be an emotional one.

Yes, there is heartbreak aplenty, as many of our mainstays receive sad news. EastEnders sees Sonia Fowler receive word of Dot Branning’s sad death, and it’s safe to say that we’re not ready to say goodbye.

Over in Coronation Street, Summer Spellman suffers a devastating miscarriage, while Hollyoaks’ Juliet Nightingale is taken for tests at the hospital, with Misbah Maalik concerned about the results.

Emmerdale, meanwhile, sees Vanessa Woodfield leave the eponymous village for a new life in Canada and we’re not crying, we swear!

Emotions will no doubt run high in a week of soap that will, in some ways, change the landscape of the genre forever.

If you’re interested to find out more about what’s to come then you’ve certainly come to the right place, as Metro.co.uk has all the spoilers you could possibly need, hot off the presses.

So what are you waiting for? Dive in!

Esther suggests Summer should move in with her and Mike and Summer reckons that it’s a good idea. Jacob, meanwhile, reveals that Aaron’s dad has been drinking, but Summer’s attention is soon elsewhere as she’s bleeding, and she subsequently discovers that she has suffered a miscarriage.

Stephen is accosted by a group of teenagers while out on a job (Picture: ITV)

Stephen calls Six Fellas, the fast food company he worked for previously, and begs them to give him his job back. The boss begrudgingly gives him another shot, but Stephen is accosted by teenagers who steal his delivery box, work phone and they demand money. Stephen spots Elaine approaching and thus he attempts to race away on his moped – but in his haste, he loses control and goes sprawling across the road!

Maria meets with Munir and Daryan to discuss the refugee centre but they’re horrified when Griff and his entourage approach. Griff confronts Maria, showing her the online petition that Max has set up. Maria’s shocked to see that it has so many signatures.

Sonia misses an important phone call, but upon charging the device she receives devastating news which stops in her in tracks. Dot has died.

Mick rushes to Linda’s aid to assist her with the consequences of her missing her probation appointment with Murray – her community payback officer. Janine, meanwhile, is upset to learn that Mick has been with Linda again and takes shocking action, dropping some upsetting news on him. The news in question, however, turns out to be a huge lie.

Shirley overhears the conversation and realises something is afoot, while Janine’s paranoia spirals out of control. …read more

As if a horror Winnie The Pooh wasn’t enough, Bambi: The Reckoning is now on its way with the deer transformed into a ‘killing machine’

We don’t think we’re ready for ‘bambi on rabies’ (Picture: GTV Archive/REX/Shutterstock) Childhoods have already been ruined with Winnie The Pooh’s horrifying transformation in Blood and Honey, a horror film adaptation following the residents of the Hundred Acre Wood years after Christopher Robin abandoned them. Now, a terrifying Bambi slasher flick is reportedly on its […]

Darren Buckley admitted subjecting his wife to controlling and coercive behaviour (Picture: MEN Media) A manipulative husband abusively berated his wife of 19 years while she was recovering from a stroke. Darren Buckley referred to her as ‘dumbolino’ and said ‘it’s like looking after a baby’ as she struggled to get her life back on […]

If Elijah could not use these machines he would die (Picture: Kaddy Thomas) The moment I clicked on my combined energy bill last week, and saw it was at £230 a month – a rise of £85 – I was in shock.   It made me feel physically sick with stress. I am a single mum […]