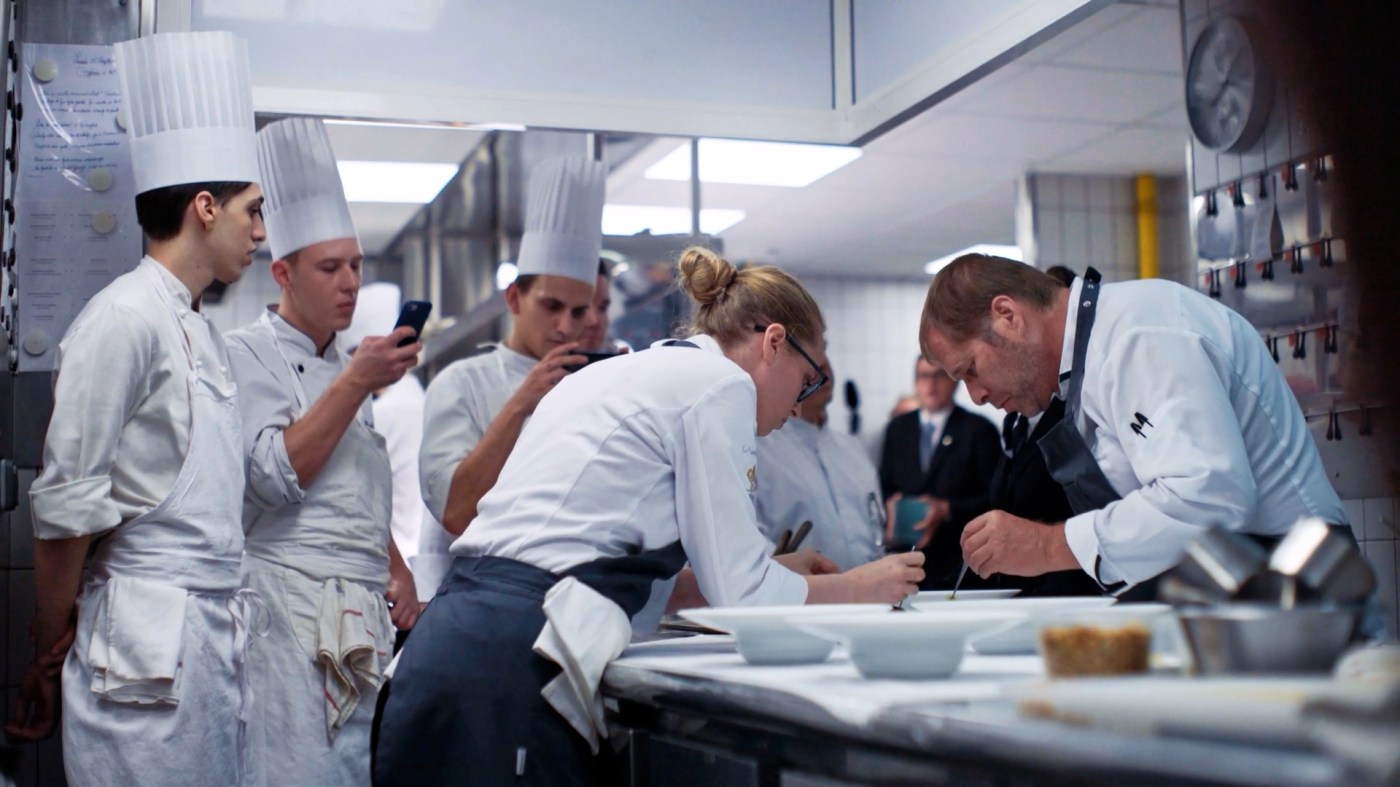 Only one Bay Area traveler would pack abalone for a trip to France.

That would be the acclaimed chef David Kinch, whose journey to collaborate and cook with three other top toques is chronicled in “A Chef’s Voyage,” a 90-minute documentary premiering this Friday, Sept. 18.

This meeting of the culinary minds was planned as a 15th anniversary celebration for Manresa, his three-Michelin-starred restaurant in Los Gatos. To represent the best of coastal California cuisine in Paris, Provence and Marseille, the film’s co-stars — sous chefs, pastry chefs and the like — had to leave room in their suitcases for local seasonings and ingredients such as the aforementioned abalone on ice.

In “Voyage,” we see the team overcome jet lag and language barriers to prepare nine top-tier meals in 10 days in the kitchens of Le Taillevent, L’Oustau de Baumanière and Le Petit Nice.

The flick, from First Run Features, normally would make its debut on the big screen. But with theaters closed due to the pandemic, the premiere becomes a virtual event for at-home viewers. Three local theaters, however, will receive half of the proceeds from each $10 ticket purchased to support them during this tough economic time.

To watch, buy tickets at FirstRunFeatures.com/chefsvoyage_playdates.html. Click on the Pruneyard Cinemas in Campbell or the Rialto Theaters in Berkeley and El Cerrito.

And then pour yourself a nice glass of wine.

What pairs best with this cinematic journey? We asked Kinch, who suggests a Provençale rosé.

Study: Adults with Covid-19 about ‘twice as likely’ to say they have dined at a restaurant

But if you want to go all in on the French theme, Manresa’s chefs are preparing a special family meal this week that’s centered on a decadent bouillabaisse with lobster, cod, sea bream and clams. Order via www.exploretock.com/manresa.

Celebrity chef Cat Cora claims her ex-wife is making her life “a living hell” and wants to destroy her “at any cost.” Cora, 53, made those claims about ex-wife Jennifer Cora in an interview and in a petition she filed Sept. 2 seeking a domestic violence restraining order, Page Six reported. The petition was filed […]

Like so many fine dining restaurants, Gather, the iconic farm-to-table restaurant in Berkeley, was forced to close when the coronavirus pandemic hit. But in its 10-year run, the restaurant had a reputation as the go-to spot for celebrating birthdays or enjoying a luxurious pre-theater meal — all while appealing to omnivores and vegetarians alike. It […]

This is a wild statement to make during a pandemic, but this may be the best year yet to check out Crush Walls. The annual street art festival, running through Sept. 20, is naturally COVID-friendly (though I’d suggest visiting during quieter hours, like mornings) and RiNo is in rare form right now. With all the street […]