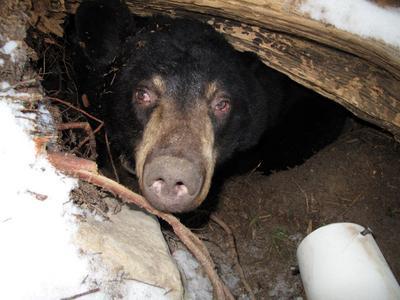 By MARK THIESSEN | The Associated Press

ANCHORAGE, Alaska — An Alaska woman had the scare of a lifetime when using an outhouse in the backcountry and she was attacked by a bear, from below.

“I got out there and sat down on the toilet and immediately something bit my butt right as I sat down,” Shannon Stevens told The Associated Press on Thursday. “I jumped up and I screamed when it happened.”

Stevens, her brother Erik and his girlfriend had taken snowmobiles into the wilderness Feb. 13 to stay at his yurt, located about 20 miles northwest of Haines, in southeast Alaska.

Her brother heard the screaming and went out to the outhouse, about 150 feet (45.72 meters) away from the yurt. There, he found Shannon tending to her wound. They at first thought she had been bitten by a squirrel or a mink, or something small.

Erik brought his headlamp with him to see what it was.

“I opened the toilet seat and there’s just a bear face just right there at the level of the toilet seat, just looking right back up through the hole, right at me,” he said.

Once safely back inside, they treated Shannon with a first aid kit. They determined it wasn’t that serious, but they would head to Haines if it worsened.

“It was bleeding, but it wasn’t super bad,” Shannon said.

The next morning, they found bear tracks all over the property, but the bear had left the area. “You could see them across the snow, coming up to the side of the outhouse,” she said.

They figure the bear got inside the outhouse through an opening at the bottom of the back door.

“I expect it’s probably not that bad of a little den in the winter,” Shannon said.

Alaska Department of Fish and Game Wildlife Management Biologist Carl Koch suspects it was a black bear based upon photos of the tracks he saw and the fact that a neighbor living about a half mile away sent him a photo of a black bear on her property two days later.

That homeowner yelled at the bear but it didn’t react. It also didn’t approach her but lumbered about its business, like it was in a walking hibernation mode.

Even though it’s winter, Koch said they get calls all year round about bears being out.

And 2020 was a record year for general bear problems in the Haines area. Reasons for that, he said, could include the fact it was a poor salmon run year combined with a mediocre berry crop. “It is also possible a bear couldn’t put on enough fat when they go in the den, that they might be out and about more often or earlier,” he said.

Toeniskoetter Construction gets new owners as founder steps aside

SAN JOSE — Charles “Chuck” Toeniskoetter, a veteran of Silicon Valley construction and development, has sold his ownership in the construction firm he founded to his son, daughter, and another company executive, the company said Friday. “I couldn’t be happier,” Chuck Toeniskoetter said Friday. “This has been evolving for years and it’s part of my […]

Sponsored: Tenant behind on rent during pandemic is dealing with unneeded workmen visits — can this be intimidation?

Q: My fiance has a compromised immune system and refuses to see me because my landlord keeps having unannounced workmen in my rented home. It’s not the first time this has happened. As a single woman, strangers in my house during a pandemic could not be more outrageous. Yesterday there was another “Maintenance service ticket” […]

Drivers getting creative when sneaking into carpool lanes is nothing new, and a California Highway Patrol officer thought he’d seen it all until last week, when an official said he pulled a driver over with the “most realistic dummy” sitting shotgun in a Toyota Tacoma. The mannequin looked like an older man with gray hair […]