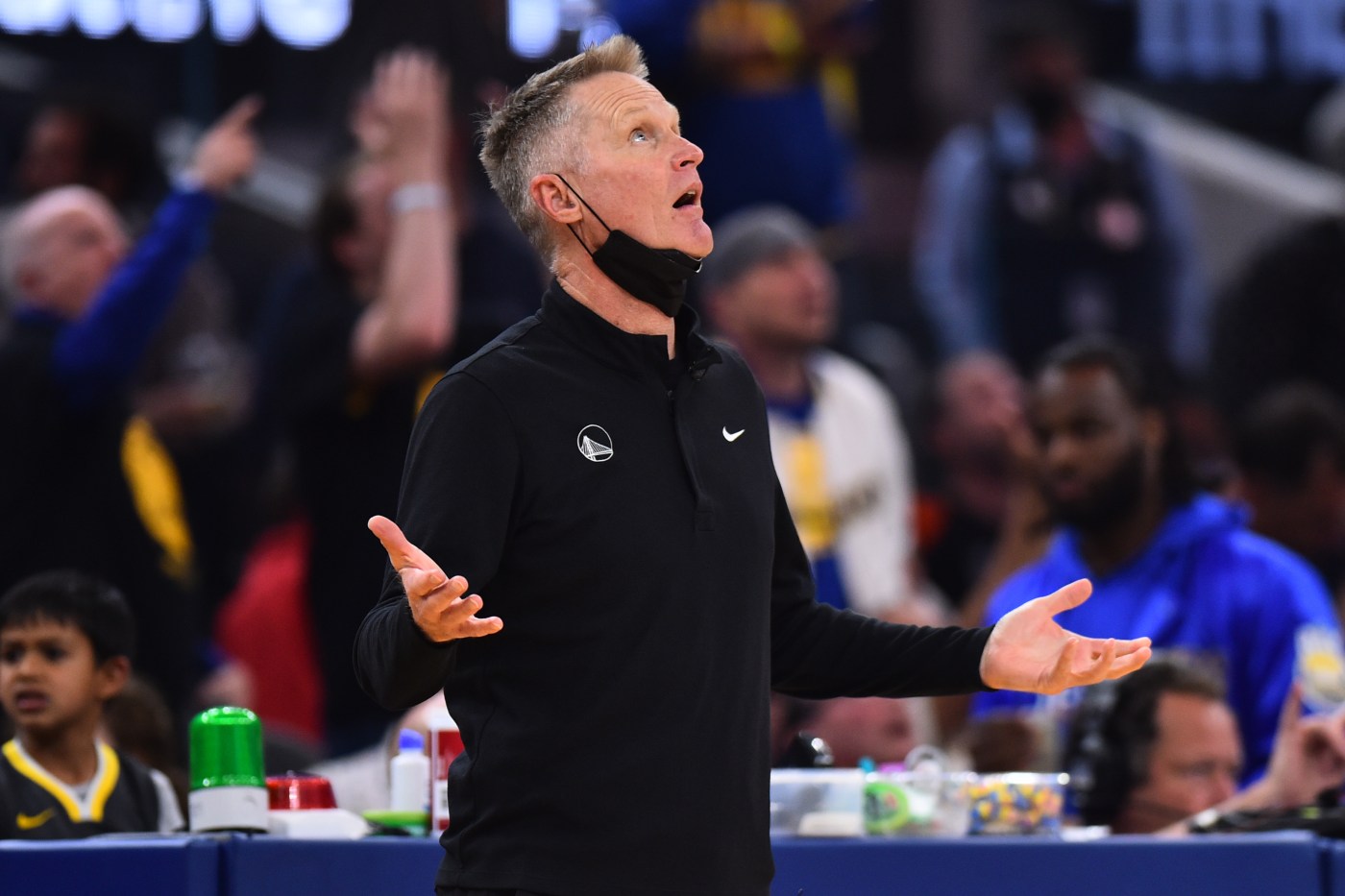 The talk of the Golden State Warriors’ rough-and-tumble playoff series with Memphis had been all about elbow injuries and wounded knees — until Coach Steve Kerr landed in quarantine with COVID-19.

With coronavirus cases surging again in the Bay Area, a COVID outbreak in the locker room could be just as devastating as the injuries that knocked the Warriors’ Gary Payton II or sidelined Grizzlies star Ja Morant.

Just hours before tonight’s Game 5 tipoff, the Warriors reported all their players were good to go, with none showing signs of COVID.

Warriors assistant Mike Brown will replace Kerr on the bench tonight as he did in Monday’s 101-98 victory after Kerr tested positive hours before the game. When the two talked on Wednesday, Kerr told Brown he was  “feeling OK,” but the Warriors have said little about whether their head coach has any symptoms from his bout with the virus.

When Kerr returns is still uncertain, said Raymond Ridder, the Warriors’ senior vice president of communications. NBA rules say he must test negative twice 24 hours apart or reach a certain CT (Cycle Threshold) value, a number that can be gleaned from certain PCR tests and indicates how much virus an infected person carries.

In the meantime, per NBA protocols, the players won’t be tested unless they show symptoms, Ridder said. During the surge of cases that started in December from the omicron wave, Warriors players Draymond Green, Jordan Poole, Andrew Wiggins and Damion Lee all were sidelined after testing positive.

Dr. John Swartzberg, a Warriors fan and infectious disease professor emeritus with UC Berkeley, said he wouldn’t be surprised if at least one player comes down with COVID in the next day or two. But that might be hard to tell if only people with symptoms are tested.

“I can see how it would be in their best interest,” he said, “not to do increased testing.”

While he said he is “not advocating for the Warriors to do more testing,” he did say after learning about Kerr’s infection the team should have been wearing masks – at least on the bench during Monday’s game – and “of course nobody was doing that.”

Few fans appeared to be wearing masks at Chase Center in San Francisco either, despite the arena’s rules requiring everyone to wear masks unless they are “actively eating or drinking.”

Kerr himself had been seen around the Chase Center wearing a mask in recent days, including on the sidelines of the Warriors’ Game 3 win Saturday night.

In an email, Ridder said the team is following “all of the required NBA COVID rules and most of their recommendations.”

Those include hand cleaning, sanitizing equipment and “testing anyone who has symptoms. We’ve been doing all of this for months and will continue to do so.  And, everyone in our traveling party, including all players, have been vaccinated.”

If the players were following CDC guidelines instead, and had close contact with their coach …read more

Travis Barker and Kourtney Kardashian | Cindy Ord/Getty Images The Kardashians are back. Their new show, aptly named The Kardashians, focuses on the three sisters as they take on all aspects of their life. It’s not much different from Keeping Up with the Kardashians, the original show that shot the three Kardashian sisters to fame. The difference is […]

Eminem | Kevin Winter/Getty Images 8 Mile received a lot of critical praise when it first hit theaters. Some critics highlighted Eminem’s performance in the film as one of the movie’s strengths. As natural as he may have come across to some on camera, however, to Eminem the transition was anything but. His contemporary Ice […]

It’s a once-in-a-lifetime opportunity to become the next owner of this historical and iconic home at 2321 Valley Street in Berkeley. This captivating home features a clinker brick facade, large stained glass windows and historical vibes.  Designed by the Fox Brothers — known for building Berkeley landmarks — the Troll House as some people called […]