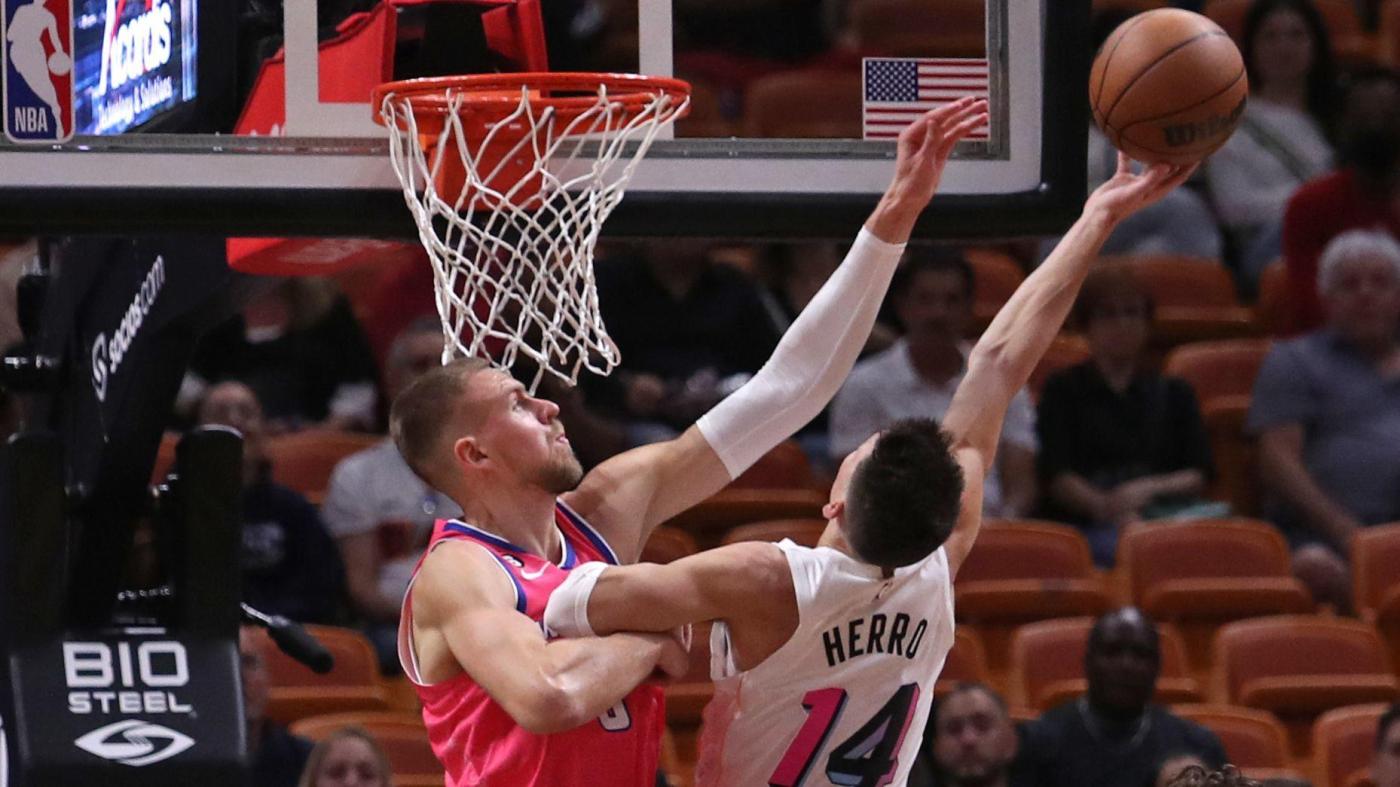 Observations and other notes of interest from Wednesday night’s 113-105 victory over the Washington Wizards:

– No, no easy explanation for these blown leads.

– Like the 21-point one the Heat held early in the third quarter.

– But this is what injury attrition does.

– It not only wears you down over the course of a schedule.

– It wears you down during a game.

– Example A: At one stage in the third quarter, the Heat were fielding a lineup of Dewayne Dedmon, Caleb Martin, Haywood Highsmith, Jamal Cain and Gabe Vincent.

– As it was, the Heat not only needed the Wizards, they needed these Wizards.

– That more than leveled the playing field, particularly on a night the Heat had Tyler Herro back.

– To put into perspective how much was missing from Wednesday’s mix, consider that the night’s best lineup might have been one that was made up of the missing.

– And still for the Heat, yet another fight to the finish.

– The question now is who makes it back for Friday’s rematch on the Heat’s court.

– And, of course, whether Kyle Lowry will run out of gas.

– He was the engine, and everything else, for the Heat on Wednesday night when they were at their best.

– As he has been all season.

– This comeback clearly will take time for Tyler Herro.

– Just as it eventually will for Jimmy Butler.

– After missing eight games with a sprained left ankle, Herro was back in the starting lineup.

– So with Strus missing his first game of the season, due to a shoulder injury, the Heat again shifted Caleb Martin to small forward.

– The remainder of the starting lineup was rounded out by Lowry, Bam Adebayo and Nikola Jovic.

– With his second rebound, Adebayo reached 3,000 for his career.

– The return of Herro was heartening, with coach Erik Spoelstra hopeful of more soon.

– “Everybody that’s not [back] is getting better,” Spoelstra said, “they’re getting healthier and we’re ready to go.”

– Vincent, back from his knee pain, played as the Heat’s first reserve.

– With Highsmith following next.

– With Jamal Cain making it nine deep after Herro was called for a third foul 31 seconds into the second period.

– Cain was active to the point that he had seven second-quarter rebounds, a period when the Wizards had only nine as a team.

– Highsmith’s first 3-point attempt was the 50th of his career.

– Spoelstra said the in-and-out nature of the rotration has led to evolving game plans.

‘Big Brother 14’: Are Shane and Danielle Still Together?

Stevie Nicks | Josh Brasted/WireImage Stevie Nicks made ‘If Anyone Falls’ because of Waddy Wachtel Throughout Nicks’ career, Wachtel worked alongside Nicks as a session musician. According to Music Spotlight Magazine, Nicks made Stevie Nicks released the song “If Anyone Falls” on her 1983 album The Wild Heart. The song is the second single from […]

Just when it seemed like the Orlando Magic were going to take significant steps forward with player availability, they wound up taking some back. The steps forward: Rookie forward Paolo Banchero and big man Moe Wagner making their returns vs. the Philadelphia 76ers on Friday at Amway Center. The steps back: Starting big man Wendell […]