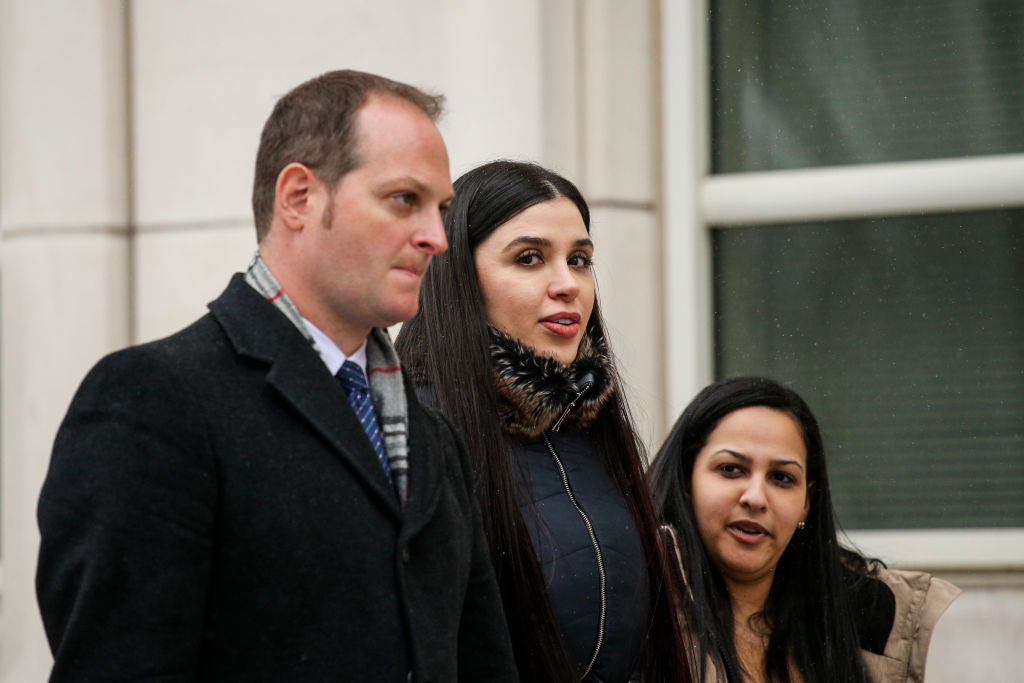 Emma Coronel Aispuro, 31, entered her plea in a federal court in Washington nearly two years after Guzman was sentenced to life in prison plus 30 years for engaging in a continuing criminal enterprise as well as drug trafficking and firearms charges as leader of the murderous Sinaloa Cartel.

A former beauty queen with an interest in fashion, Coronel wore a green prison uniform and white face covering Thursday as she told US District Judge Rudolph Contreras — through an interpreter — that she understood and accepted the conditions her plea agreement.

“Are you entering this plea because you are guilty and for no other reason?” Contreras asked Coronel, for each of the three counts.

Her attorney, Jeffrey Lichtman, said before the hearing that Coronel — who married Guzman in 2007 — hoped to some day get back to their young twin daughters.

“This is an arm’s length plea agreement,” Lichtman said. “She’s happy to take responsibility … (to) get on with her life.”

Attorney Mariel Colon, also representing Coronel, said of her client’s plea: “The only thing I can tell you is that she is at peace with her decision.”

Coronel pleaded guilty to conspiracy to distribute heroin, cocaine, marijuana and methamphetamine for importation into the US; conspiracy to launder monetary instruments; and violating the Kingpin Act by engaging in transactions and dealings in property of her husband, a significant foreign narcotics t rafficker designated by the Office of Foreign Assets Control of the U.S. Department of the Treasury.

She will sentenced September 15.

“The defendant aided and abetted the objectives of the Sinaloa Cartel,” Anthony Nardozzi, Deputy Chief of Litigation at the Justice Department, told the court.

“And it allowed Guzman to resume his leadership role at the Sinaloa Cartel and in doing so, furthered the cartel’s drug trafficking business.”

Nardozzi said prosecutors had evidence and witness testimony showing Coronel’s involvement in the cartel from 2011 to 2017. Coronel often served as a go between for her husband and cartel associates while he was incarcerated in Mexico, he said.

Nardozzi also said there was evidence Coronel facilitated the trafficking of thousands of kilograms of narcotics, including cocaine, heroin and marijuana.

Coronel was a regular at her husband’s months-long trial in Brooklyn federal court in 2019, often exchanging waves and smiles with one of the world’s most feared drug lords.

New York tabloids regularly reported on her fashion choices and one day she and Guzman wore matching velvet jackets in court.

After Guzman was convicted, he signed away the rights to his name so that Coronel could start an El Chapo-branded clothing line featuring his signature, according to Coronel’s attorneys.

“It is a project dedicated to our daughters,” she told CNN in a statement …read more

A Los Olivos chef shares his tips for Roman-style artichokes

The charming town of Los Olivos, in the middle of the Santa Barbara wine region, has long been a bustling spot. Things may have slowed a bit mid-pandemic, but that didn’t stop Nella Kitchen & Bar from opening in the Fess Parker Wine Country Inn last fall. It’s a modern Cal-Italian spot from the same […]

HAYWARD — A man was arrested  Tuesday morning on suspicion of assaulting a station agent at the  Hayward BART Station  with a bottle, officials said. The attack happened about 7 a.m. Tuesday at the station, which is at 699 B Street. BART officials said the station agent confronted the suspect, a 26-year-old Hayward man, for […]

Victim died eight years after Hayward stabbing, and now his alleged attacker is in jail on murder charges

OAKLAND — A Vallejo man has been charged with murder in connection with a 2012 stabbing outside of a Hayward motel, which left the victim paralyzed — but alive — for nearly a decade, until he died last year, court records show. Keith L Napier, 59, was charged in mid-May with murdering Christopher Longmire. The […]