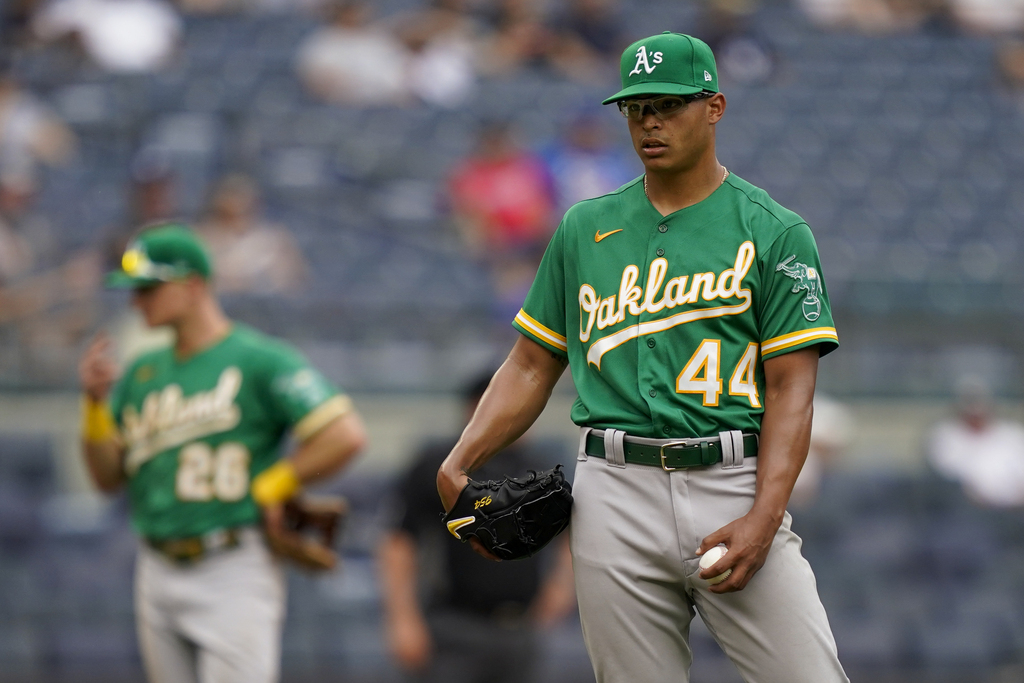 Jesús Luzardo rose quickly to the big league stage in 2019 not only because of his elite pitches, but because of a confidence not many players his age show. This June, Luzardo was optioned to Triple-A Las Vegas because those two strengths started to waver.

The 23-year-old phenom has been pegged not only as a regular part of the A’s rotation, but as an arm with the repertoire be one of baseball’s most dominant players. The A’s hope Luzardo’s trip to pitch with the Las Vegas Aviators could get him back on track after a tumultuous few months at the big league level. But what do they need to see before he can return?

“Mostly fastball command,” A’s farm director Ed Sprague Jr. said. “Pitching under control. He has great secondary pitches. If he can command the fastball and work ahead in the count he will be dominant.”

Imperfect fastball command and pitch usage sunk Luzardo in 38 rocky big league innings this year; he would often abandon his fastball and rely on his off-speed offerings — his changeup and curveball — when innings spiraled. If Luzardo couldn’t throw those for strikes, big league hitters would just sit fastball. Opposing hitters batted .333 with a .784 slugging percentage off his four-seamer and .342 with a .500 slugging percentage off his sinker.

Struggles with his fastball command spiraled into a 6.87 ERA over 13 games. Spliced into his 2021 sophomore season was a pinky finger fracture suffered while playing video games — it sidelined him for the entire month of May. In six starts prior to the injury, Luzardo had a 5.79 ERA. With rookie James Kaprielian building up his Rookie of the Year candidacy out of the rotation in his place, Luzardo was moved to the bullpen — where he could figure out his pitch usage in smaller doses. But command issues were only amplified as he put together a 9.90 ERA in seven appearances.

Luzardo’s highs were high; he looked efficient and nasty when he pitched six scoreless against the Minnesota Twins in April and back-to-back scoreless outings against the Los Angeles Angels and Seattle Mariners out of the bullpen once he returned from injury. After giving up six home runs and 11 earned runs over his last final appearances, his confidence looked shaken and it became clear Luzardo needed the space to learn — as pitching coach Scott Emerson says — how to pitch and not just throw.

Las Vegas’ small confines and dry air isn’t kind to most pitchers, and it’s been cruel to Luzardo since he was optioned on June 21. He’s followed both of his scoreless outings with concerning, 7-run outings. But A’s officials see some improvement, particularly in his last outing on July 19 where he dealt six innings of one-run ball with seven strikeouts. Luzardo was perfect through the first three innings and threw only his fastball in a few at-bats.

“It was positive. He had a tough one the time before and was much better yesterday,” manager Bob Melvin …read more

A lifetime ago on a Sunday night, Connie Bennett taught her 7-year-old granddaughter to pick out a melody on a chord organ, an early birthday gift she’d nabbed from a thrift store for the girl, who’d turn 8 in two days. Melissa Bennett seemed to enjoy the instrument, and when Connie headed home around 9 […]

By Mary Clare Jalonick | Associated Press WASHINGTON — House Speaker Nancy Pelosi is rejecting two Republicans tapped by House GOP Leader Kevin McCarthy to sit on a committee investigating the Jan. 6 Capitol insurrection, citing the “integrity” of the probe. Pelosi said in a statement Wednesday that she would not accept the appointments of […]

By Andrew Dalton | Associated Press LOS ANGELES — Harvey Weinstein pleaded not guilty in a Los Angeles courtroom Wednesday to four counts of rape and seven other sexual assault counts. Sheriff’s deputies brought the 69-year-old convicted rapist into court in a wheelchair. He was wearing a brown jail jumpsuit and face mask. Attorney Mark […]