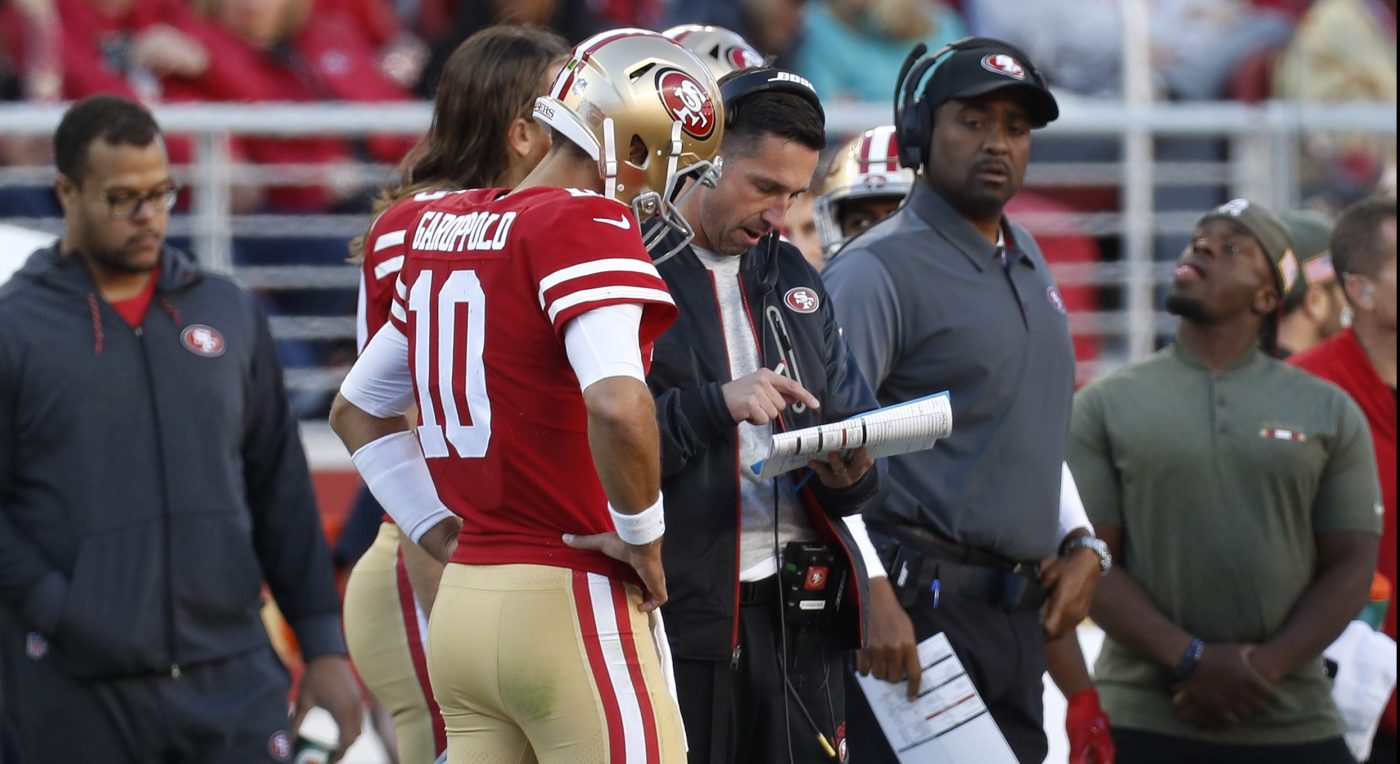 The 49ers are in unfamiliar territory.

How can a team that came up a few plays short of a Super Bowl title come back with a 2-3 record that includes unexpected losses to the middling Philadelphia Eagles and Miami Dolphins?

Former 49ers great Steve Young pointed to a few issues holding San Francisco back in an interview on KNBR earlier this week. After pointing out that the team lost its “ferociousness” when it lost edge rusher Nick Bosa to an ACL tear in Week 2, the Hall of Fame quarterback provided his assessment of struggling quarterback Jimmy Garoppolo.

Young said Garoppolo is moving through his reads too fast, not letting the play calling come to him. It’s caused a lack of trust, Young said, between the 28-year-old quarterback and his play caller, head coach Kyle Shanahan.

“Look, we’ve all been there, it’s OK, but now fix it,” Young said in the radio interview. “We’ve got to now slow everything down, because Kyle is going to call plays, and he can’t wonder if you’re going to be too quick and not catch the guy he knows is going to be open. So they need to get on the same page.”

NFL fantasy football projections: Which 49ers to start against Rams?

49ers-Rams injury report: Will Garoppolo’s ankle allow him to go 4-0 against L.A.?

Kurtenbach: Three 49ers not named Jimmy Garoppolo who must step up to beat Rams

Garoppolo missed two games after sustaining a high ankle sprain and leaving at halftime of the 49ers’ Week 2 win over the New York Jets. He was benched for backup C.J. Beathard midway through last week’s game against the Miami Dolphins after throwing two interceptions and completing just 7 of 17 pass attempts to earn a dismal 15.7 quarterback rating.

“I’m sure Kyle at the half — Jimmy was hurt, I get that — but Kyle was also frustrated with Jimmy,” Young said. “I’m sure Kyle is like, ‘Guys are coming open, you’re rushing through it, slow it down.’ I think that’s what’s got to happen quickly.”

Young added that, behind health, the 49ers’ biggest priority should be for Shanahan to find the confidence in Garoppolo so that he can make aggressive play calls — both on the ground and through the air. He posits that, if the 49ers want to get back on track, they’ll need to set a goal to score at least five …read more

By DON THOMPSON | The Associated Press SACRAMENTO — Northern California prosecutors said Friday they will again seek the death penalty for Scott Peterson in the slaying of his pregnant wife and unborn son nearly 19 years ago, even as a county judge considers throwing out his underlying conviction because of a tainted juror. Stanislaus […]

SAN JOSE — A downtown San Jose residential tower that’s a historic landmark has been bought by a Southern California real estate firm that specializes in apartment communities. Vintage Tower, an art deco highrise that was constructed in 1928, has been bought by an affiliate controlled by Avanath Capital Management, according to Santa Clara County […]

By Lindsey Bahr | Associated Press If anyone was born to make a film about the infamous federal trial surrounding the protests outside the 1968 Democratic National Convention, it’s Aaron Sorkin. The grandstanding of the celebrity revolutionaries Abbie Hoffman and Tom Hayden, the clash of disparate personalities and protest styles, the earnestness of the anti-war […]