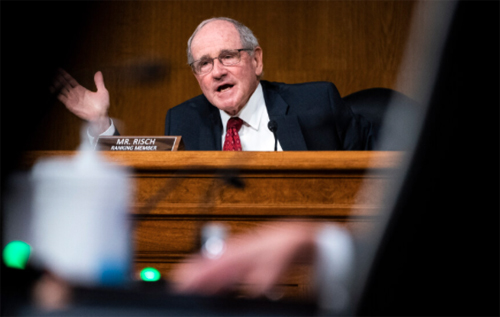 (CNN) — Sen. Jim Risch had a pressing question he needed to ask Secretary of State Antony Blinken during the latter’s testimony Tuesday on Capitol Hill: Who controls the mute button on Joe Biden?

That may sound like a joke, but Risch wasn’t joking.

The Republican from Idaho started his questioning of Blinken, who was on the Hill to discuss the deadly serious business of the controversial withdrawal of U.S. troops from Afghanistan, this way: “Somebody in the White House has authority to press the button and cut off the president’s speaking ability and sound. Who is that person?”

Blinken responded that Biden “speaks very clearly and very deliberately for himself.”

Risch would not be dissuaded. “Are you saying there is no one in the White House who can cut him off? Because yesterday that happened, and it’s happened a number of times before that. It’s been widely reported that somebody has the ability to push the button and cut off his sound and stop him from speaking. Who is that person?”

Blinken responded, “There is no such person.”

Risch continued: “Are you unaware that this is actually happening? It was widely reported, and it’s not the first time it’s happened. Are you telling this committee that there’s no one in the White House who pushes the button and cuts him off in mid-sentence?”

Here’s what was going on:

This “mute button” idea pushed by Risch appears to originate from a clip tweeted by the Republican National Committee on Monday that shows Biden begin speaking at an event and then the White House feed cutting off.

BIDEN: “Can I ask you a question?”

The suggestion from the RNC — and Risch — is clear: Someone in the White House  ended the live stream because the president was going to say something embarrassing.

The reality is far different.

Friedman: What comes after the war on terrorism? War on China?

The event in question was a meeting in Boise, Idaho, with …read more

Gabrielle Union and Dwyane Wade | Emma McIntyre/Getty Images Gabrielle Union opens up about devastation of Dwyane Wade fathering another child Union has been quiet about what went on in her relationship when Wade revealed that he had gotten another woman pregnant. Now, in an excerpt from her book You Got Anything Stronger?, shared by […]

Earlier this year, Lizzo paid tribute to her late father on Instagram, sharing how difficult it was to adjust to his death more than 12 years ago. Recently, the singer honored her mother for enduring the loss with an extravagantly sweet birthday gift.     Lizzo’s father’s death impacted her music Lizzo on September 07, 2021 […]

‘The Pioneer Woman’: The One Ingredient Ree Drummond Used in Taco Shells and Cheese Recipe Fans Are Not Vibing With

Ree Drummond is the fabulous host of The Pioneer Woman. The celebrity cook is one of the most recognizable stars on Food Network bringing joy to viewers every week with her delicious recipes. What’s great about Drummond’s cooking show is that viewers are able to follow along and replicate the yummy meals she makes. The […]