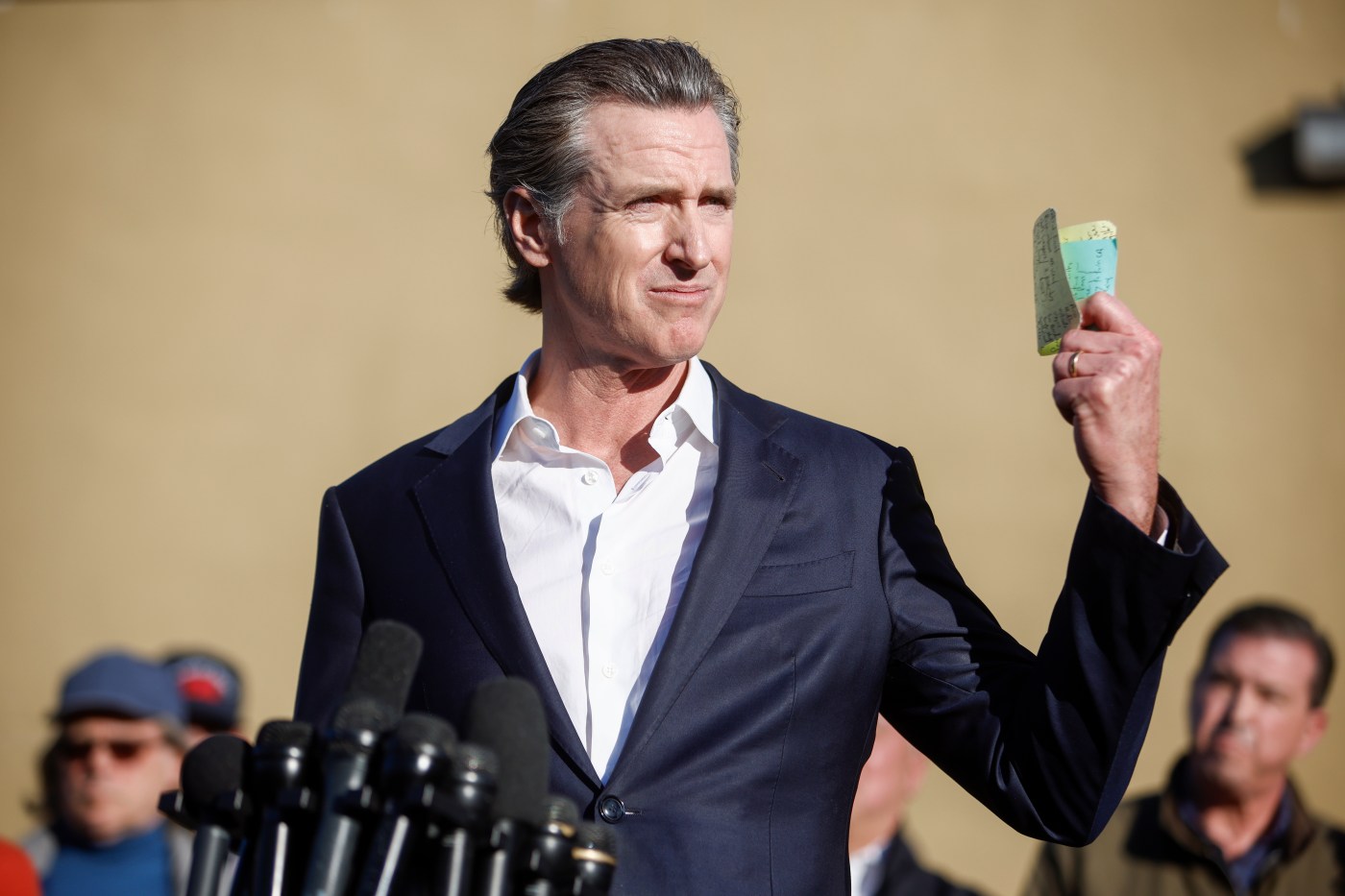 HALF MOON BAY — As he stood before a community still reeling from a mass shooting targeting immigrant farm workers, Gov. Gavin Newsom vowed to continue fighting for stronger gun control laws — while blasting Republicans for their lack of action on the issue.

Fresh from Monterey Park, where another shooting at a dance hall Saturday night killed 11 people, Newsom expressed frustration and dismay that he had to add another to the list of tragedies this year. The nation has seen 39 mass shootings just in the first 24 days of this year, he said, and Monday’s, which left seven people dead at two farms in Half Moon Bay, hit especially close to home.

“What the hell is going on?” he asked, adding, “We’ve allowed this to happen. It doesn’t have to be this way. It wasn’t always this way.”

Newsom spoke from the I.D.E.S. Portuguese Hall on Main Street in downtown Half Moon Bay, which had been used as a reunification center the night of the shooting – becoming a place of anxiety and, in many cases, heartbreak, as families gathered to find out the fates of their loved ones. On Tuesday morning a piece of yellow crime scene tap hung limply from the entrance to the center’s parking lot, while across the street, an American flag hung at half mast in the picturesque town center populated with bed and breakfasts, garden shops and a children’s swimming school.

Chunli Zhao, who was arrested Monday, is accused of shooting five people – killing four and wounding one — at Mountain Mushroom Farm, where Zhao worked. A short time later, authorities say Zhao shot and killed another three people about three miles south on Highway 1 at Concord Farms.

Newsom promised he would continue fighting for strong gun control laws, while also attacking Republicans for getting in the way of making the country safer. He singled out several by name, including Speaker of the House Kevin McCarthy.

“We haven’t heard one damn word from him,” Newsom said, noting the GOP leader’s silence following the Monterey Park and Half Moon Bay shootings.

Meanwhile, Sen. Dianne Feinstein introduced legislation to ban “military-style assault weapons” and high-capacity magazines – a bill that would have outlawed the modified 9 mm semi-automatic weapon used by the gunman in Saturday’s mass shooting in Monterey Park. President Joe Biden has signaled his support for the measure.

By Meg Kinnard | Associated Press COLUMBIA, S.C. — Nikki Haley is moving closer to making her presidential campaign official. On Wednesday, supporters of the former South Carolina governor will get an email invitation to a Feb. 15 launch event in Charleston, at which she plans to announce her campaign, according to a person familiar […]

Three years after the first COVID cases were detected in the Bay Area, a vexing question persists that can no longer be explained by the terrifying arrival of a deadly novel coronavirus: Why are so many people still dying? Since 2020, California has recorded 130,000 more deaths than in the three previous years, a nearly […]