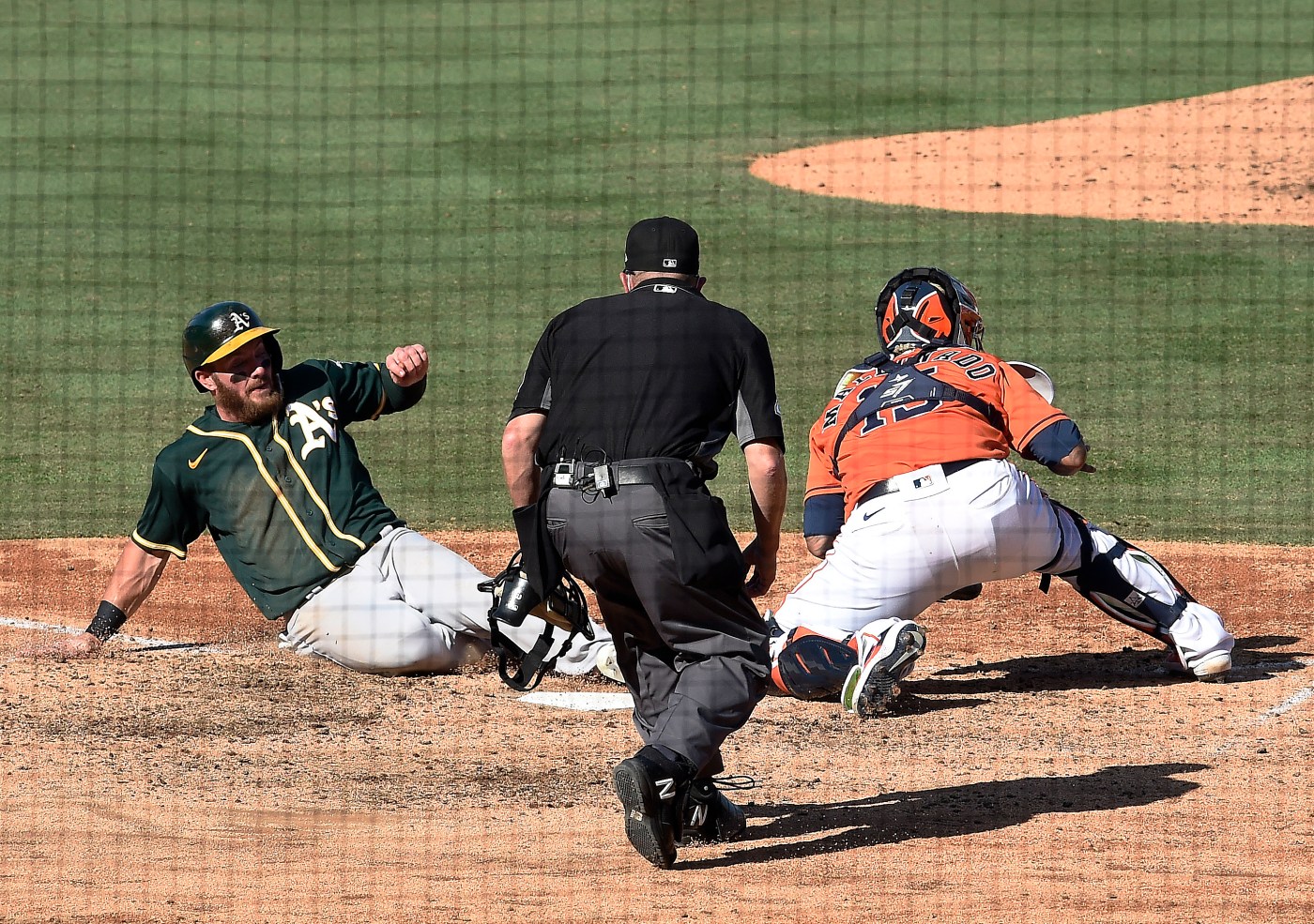 The Oakland A’s have extended their postseason run at least one more day.

They defeated the Houston Astros 9-7 Wednesday in Game 3 of their American League Divisional Series, staving off elimination to narrow the Astros’ lead in the series to 2-1.

Here’s what the A’s and Astros said after the game:

On the catcher’s interference call: “We thought it was a foul tip, that’s what we heard.”

On the Laureano blooper: “Sometimes they don’t look great but they end up being huge hits through the course of the game. Maybe not 110 off the bat like some of the others.”

On La Stella: “Unbelievable how it missed the pad completely and hit him right on the elbow … He got an x-ray, no fracture, no break, so we’ll see how he’s doing tomorrow.”

On starter tomorrow: “Montas’ll start tomorrow. Shoot, we live another day and you’ll take it.”

On sacrifice flies rather than home runs: “We’re just fighting tooth and nail to try to come back. The game had i don’t know how many lead changes.”

On his outing: “I felt pretty good throughout my whole outing. Made two mistakes, which were pretty costly, but glad we were able to pull it out.”

On Hendriks: “We wouldn’t be here without him and we’re glad to have him on our side.”

On Pinder HR: “It feels like every time we make a comeback, me and Petit are together watching it.”

On mindset Game 3 vs. Game 2: “As Pinder said earlier we knew this was going to be a dogfight and as you can tell, it is.”

On Montas going Game 4: “We’re extremely confident. That’s my boy so i got his back no matter what. I know he’s going to go out there and do his thing.”

On plan for the at-bat: “Get something up in the zone early in the count. Guy has good stuff but just want to get something up, try to elevate the ball.”

After he hit it: “I didn’t know but I saw him drifting a bit and the ball has been carrying here a bit. I hit it good enough for a sac fly but it just kept carrying.”

Before the HR: “Right before that inning Ramon got everybody up and said this wasn’t it.”

On Ramon: It was in between innings. “You could kind of just feel when we got into the dugout that the energy was kind of getting down again, just getting that flatline feeling again and Ramon wasn’t having any of that.”

On Hendriks: “That was incredible. Again, Liam has been lights out for us the past two years. That’s not easy to do. That’s not easy to do two ups, but to do three ups and shut it down like that… Liam has time and time again just closed the door in big situations. That’s the guy we want out there in the ninth inning. It just happened to be the seventh, eighth and ninth today.”

On his mentality: “I’m more along the lines …read more

MLB postseason: What should Giants fans watch for during the rest of the playoffs?

When Farhan Zaidi took over as the Giants’ president of baseball operations in November, 2018, even the most optimistic fans wouldn’t have guessed a bullpen anchored by Mark Melancon and Will Smith would be cruising into the NLCS two years later. It would have helped if fans knew Melancon and Smith would be pitching for […]

Ask Amy: My marriage dreams have faded into work and chores

Dear Amy: I have been in a relationship with “Bret” for over five years. He moved in with me after about six months. Columnist Amy Dickinson (Bill Hogan/Chicago Tribune)  We used to talk about marriage and the future. Now we just do chores and yardwork. We both went to school during this time and for […]

Trump campaigns on suburban preservation. Will it help him or the suburbs?