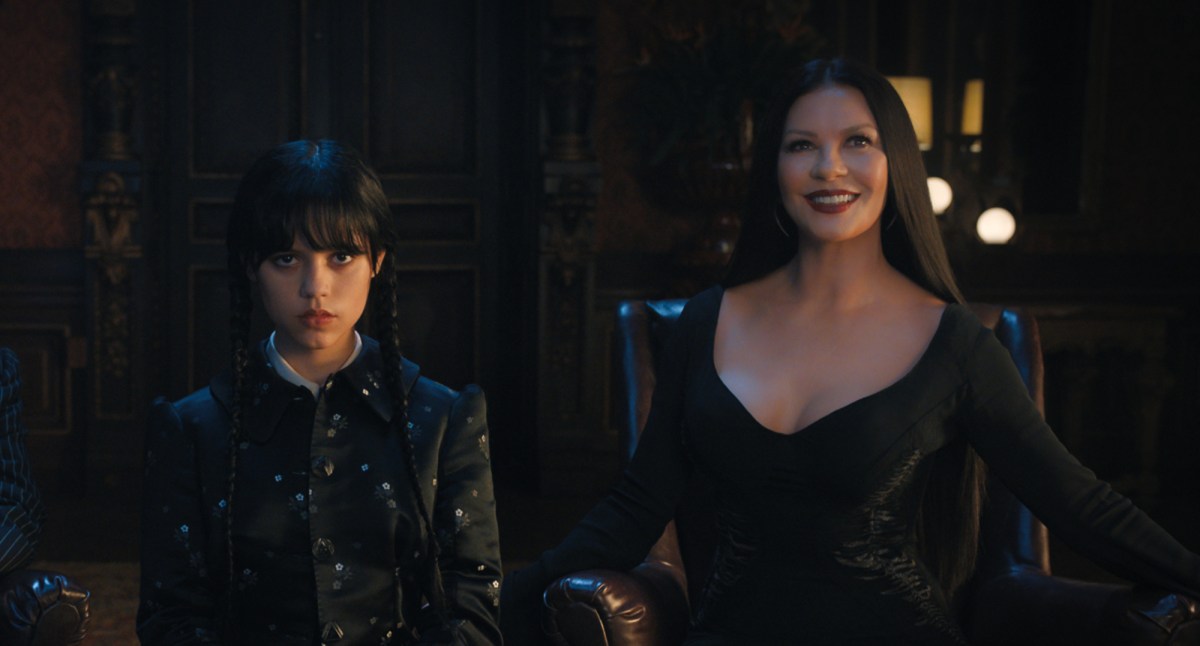 Fans of the Addams Family franchise admired the unique relationship between the glamorous Morticia Addams and her daughter Wednesday. Being both fascinated by the darkness of death and the macabre, Morticia often understood her daughter’s desires and overall personality. But the Netflix series Wednesday tweaks Morticia (Catherine Zeta-Jones) and her daughter’s relationship. In this supernatural tale, Wednesday (Jenna Ortega) fights to move away from her mother’s shadow.

Wednesday wants nothing to do with her mother’s achievements

In the original movies, the family matriarch has no problem giving her daughter an ax or a few knives to play with her brother. But fans adored their mother-daughter bond, with Morticia being one of the few people who truly understood who her daughter was. But once diving into Wednesday, the story is a bit different.

This version of Morticia is more based on emotion and trying to reconnect with her distant daughter. In Wednesday, after the female lead is sent to Nevermore, her family farewell is less than amicable. It is clear that Wednesday resents her mother and promises to escape and never see her again. Morticia gives Wednesday a parting gift. An obsidian necklace of their initial works to conjure vision. But Wednesday is less than impressed and calls it a “tchotchkes.”

RELATED: ‘Wednesday’: Who Are the Actors Playing Xavier and Tyler? – Wednesday’s Love Interest

But Wednesday further stabs the dagger into her mother’s heart when telling her she will never fall in love, be a housewife, or have a family. She clearly states, “I’m not you, Mother.” From the get-go, fans see that the franchise bond between the two is nearly nonexistent.

One of the things that Wednesday makes very clear in the Netflix series is that she does not want to live in her mother’s shadow. While at Nevermore, Morticia was at the center of almost everything. She was beautiful and well-liked and led her dorm to win the Poe Cup. Fans even see that Principal Weems (Gwendoline Christie) has resentment toward her old roommate, likely for stealing Gomez (Luis Guzmán).

But to her surprise, Wednesday does lead her dorm to win the Poe Cup for the first time in years and joins the fencing team. She also has the same complex visions as her mother. In Wednesday Episode 5, her anger toward her mother becomes more intense when she confronts her parents about their past at Nevermore.

RELATED: ‘Wednesday’: Who Is Goody Addams and How Does She Tie Into the Greater Mystery?

Sadly, Morticia is less than enthusiastic about telling Wednesday the truth because she knows her daughter would not believe her. But when she does, Wednesday admits she hates that her mother sent her to …read more

Considered one of the most influential series of all time, Friends was not just a TV show, it was a cultural phenomenon. The show’s popularity spread worldwide, with themed cafés popping up worldwide, apparel with the cast members’ faces, and popular vernacular influenced by the show’s slang. There have even been several trivia games wholly […]

California man gets life in prison for setting mother of his children on fire on Christmas Day 2015, killing her

POMONA — A man who doused the mother of his four children with gasoline and set her on fire during a domestic dispute in Pomona on Christmas Day 2015 was sentenced Wednesday to life in prison without the possibility of parole. Clarence Durell Dear, 58, was convicted in October of first-degree murder, and jurors found […]