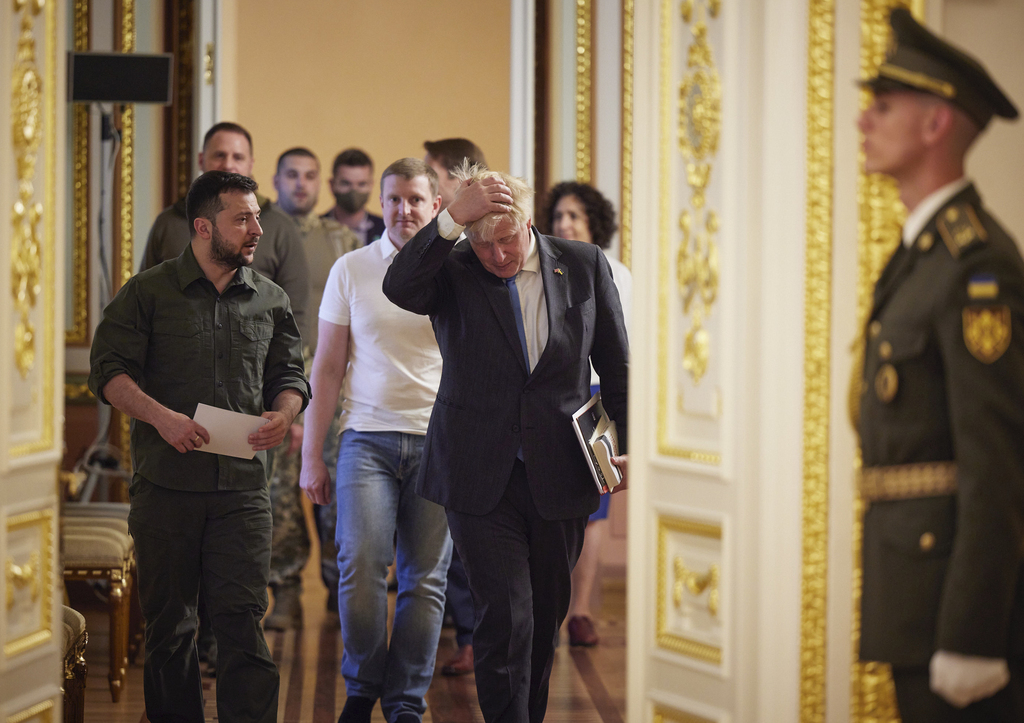 KYIV, Ukraine — The European Union’s executive arm recommended putting Ukraine on a path to membership Friday, a symbolic boost for a country fending off a Russian onslaught that is killing civilians, flattening cities and threatening its very survival.

In another show of Western support, British Prime Minister Boris Johnson arrived in Kyiv to meet with President Volodymyr Zelenskyy to offer continued aid and military training, adding that evidence points to Russia “taking heavy casualties” in the invasion.

The latest embrace of Ukraine by its European allies marked another setback for Russian President Vladimir Putin, who launched his war nearly four months ago, hoping to pull his ex-Soviet neighbor away from the West and back into Russia’s sphere of influence.

At Russia’s showpiece economic forum in St. Petersburg on Friday, Putin said Moscow “has nothing against” Ukraine joining the EU, because it “isn’t a military organization, a political organization like NATO.” He also reprised his usual defense of the war, alleging it was necessary to protect people in parts of eastern Ukraine controlled by Moscow-backed rebels and to ensure Russia’s own security.

Johnson’s trip to Kyiv followed one a day earlier by the leaders of Germany, France, Italy and Romania, who vowed to support Ukraine’s fight without asking it to make any territorial concessions to Russia.

“We are with you to give you the strategic endurance that you will need,” Johnson said on his second visit to the country since the Feb. 24 start of the war. Although he did not detail the aid, he said Britain would lead a program that could train up to 10,000 Ukrainian soldiers every 120 days in an unspecified location outside the country.

The British-led training program could “change the equation of this war,” Johnson said. Ukraine has been taking heavy casualties in the battle for the country’s eastern industrial heartland.
“I completely understand why you and your people can make no compromise with Putin because if Ukraine is suffering, if the Ukrainian troops are suffering, then I have to tell you that all the evidence is that Putin’s troops are under acute pressure themselves and they are taking heavy casualties,” he said. “Their expenditure of munitions, of shells and other weaponry, is colossal.”

He said that two months after his last visit, “the Ukrainian grit, determination and resilience is stronger than ever, and I know that unbreakable resolve will long outlive the vain ambitions of President Putin.”

Johnson said his government will work to intensify the sanctions on Russia. He praised the resilience of Ukrainians and how “life is coming back to the streets” of Kyiv, but noted that “only a couple of hours away, a barbaric assault continues. Towns and villages are being reduced to rubble.”

Zelenskyy welcomed Johnson’s visit, saying on Telegram: “We have a common view of the movement towards Ukraine’s victory. I’m grateful for a powerful support!”

The possibility of membership in the EU, created to safeguard peace on the continent and serve as a model for the rule of …read more

Orioles minor league report: A breakout for Noelberth Romero and a rise for Coby Mayo

As Coby Mayo, Colton Cowser and Connor Norby packed their bags and headed for Double-A Bowie on Monday, the upper realm of the Orioles’ minor league system gained another trio of highly ranked prospects. With those additions, 10 of the top 11 prospects in Baseball America’s organizational rankings are in the upper minors or the […]

Q: Let’s be blunt. To reduce traffic deaths and crashes, we need more cops on our streets and freeways. Does anyone agree? Fred Ruiz, Hayward A: Yes. The National Highway Traffic Safety Administration (NHTSA) confirms that having more officers patrolling has a positive and measurable impact on roadway safety. It reduces dangerous driving behaviors, such as not […]

NEW YORK — Twitter’s board has recommended unanimously that shareholders approve the proposed $44 billion sale of the company to billionaire and Tesla CEO Elon Musk, according to a regulatory filing Tuesday. Musk reiterated his desire to move forward with the acquisition last week during a virtual meeting with Twitter employees, though shares of Twitter […]