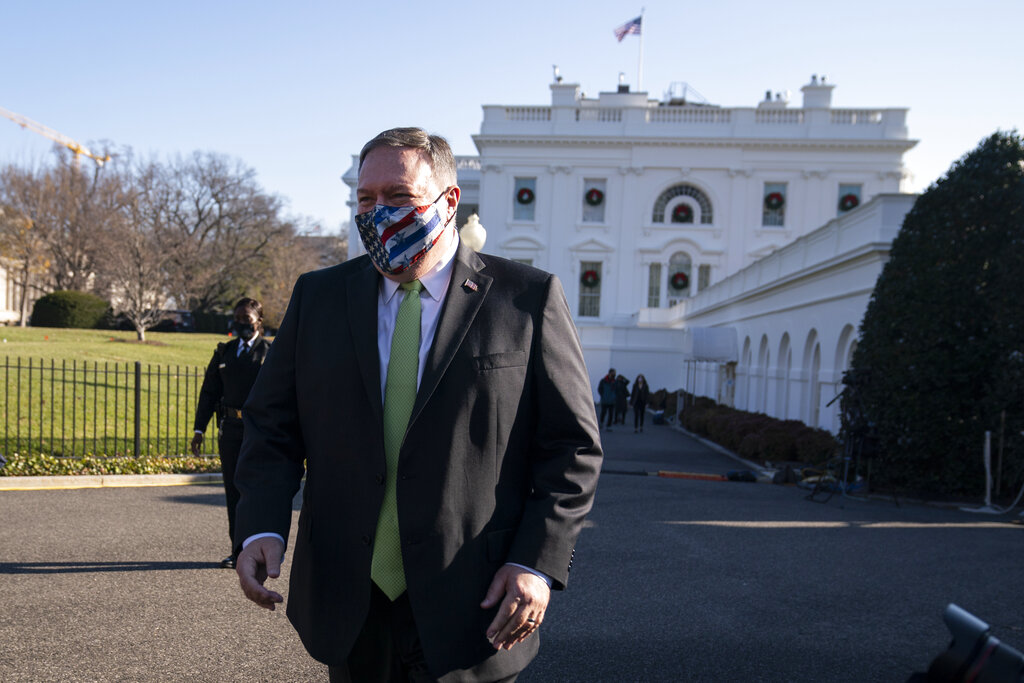 WASHINGTON (AP) — In a highly unusual move, American diplomats have drafted two cables condemning President Donald Trump’s incitement of the deadly assault on the Capitol and calling for administration officials to possibly support invoking the 25th Amendment to remove him from office.

“Failing to publicly hold the president to account would further damage our democracy and our ability to effectively accomplish our foreign policy goals abroad,” according to the second of the two cables, which were circulated among diplomats late last week and then sent to State Department leadership.

The cable called on Pompeo to support any lawful effort by Vice President Mike Pence and other Cabinet members to protect the country including through “the possible implementation of the procedures provided for in Article 4 of the 25th Amendment, if appropriate.” The amendment allows for the vice president and a majority of the Cabinet to declare a president unfit for office, and the vice president then becomes acting president.

The cables were an extraordinary protest against a sitting U.S. president by American diplomats, who have long complained that the Trump administration has ignored and diminished their role and expertise. The dissent channel is normally used to oppose specific foreign policy decisions. The two most recent cables appear to be unprecedented in their scope and characterization of the president as a danger to the country.

The cables also reflect anger at the response to the riot by Secretary of State Mike Pompeo, a loyal Trump ally.

Pompeo has condemned the violence at the Capitol but has pointedly not addressed the role Trump played in encouraging his supporters who stormed the building. Nor has Pompeo addressed the aftermath or acknowledged that American diplomats overseas may now face new difficulty in promoting democracy.

Trump himself has railed about what he sees as disloyalty at the State Department. He once referred to it publicly — and in front of Pompeo and reporters — as “the deep State Department,” a reference to what Trump and his supporters believe is a cabal of entrenched bureaucrats intent on subverting his policies.

It was not immediately clear how many diplomats signed the cables, both of which were viewed by The Associated Press.
The State Department did not immediately respond to a request for comment.

“It is essential that the Department of State explicitly denounce President Trump’s role in this violent attack on the U.S. government,” said the first of the two cables, which added that the president’s own comments should not be used “as he is not a credible voice on this matter.”

“Just as we routinely denounce foreign leaders who use violence and intimidation to interfere in peaceful democratic processes and override the will of their voters, the department’s public statements about this episode should also mention President Trump by name. It is critical that we communicate to the …read more

The cold winds and rain of January clash mightily with our culinary dreams of adding bright, flavorful herbs and vegetables to our meals, but there is some tiny magic to be had in the form of microgreens. We’re talking barely germinated plants that, with the snip of the scissors, can provide those flavors we’ve been […]

As Marin County’s three hospitals work to vaccinate their employees for the coronavirus, some staffers have decided not to get the shots. “Right now, roughly 30% of our employees have declined the vaccination,” Karin Shavelson, chief medical officer at MarinHealth Medical Center in Greenbrae, said on Tuesday. Shavelson said that number might change by the […]