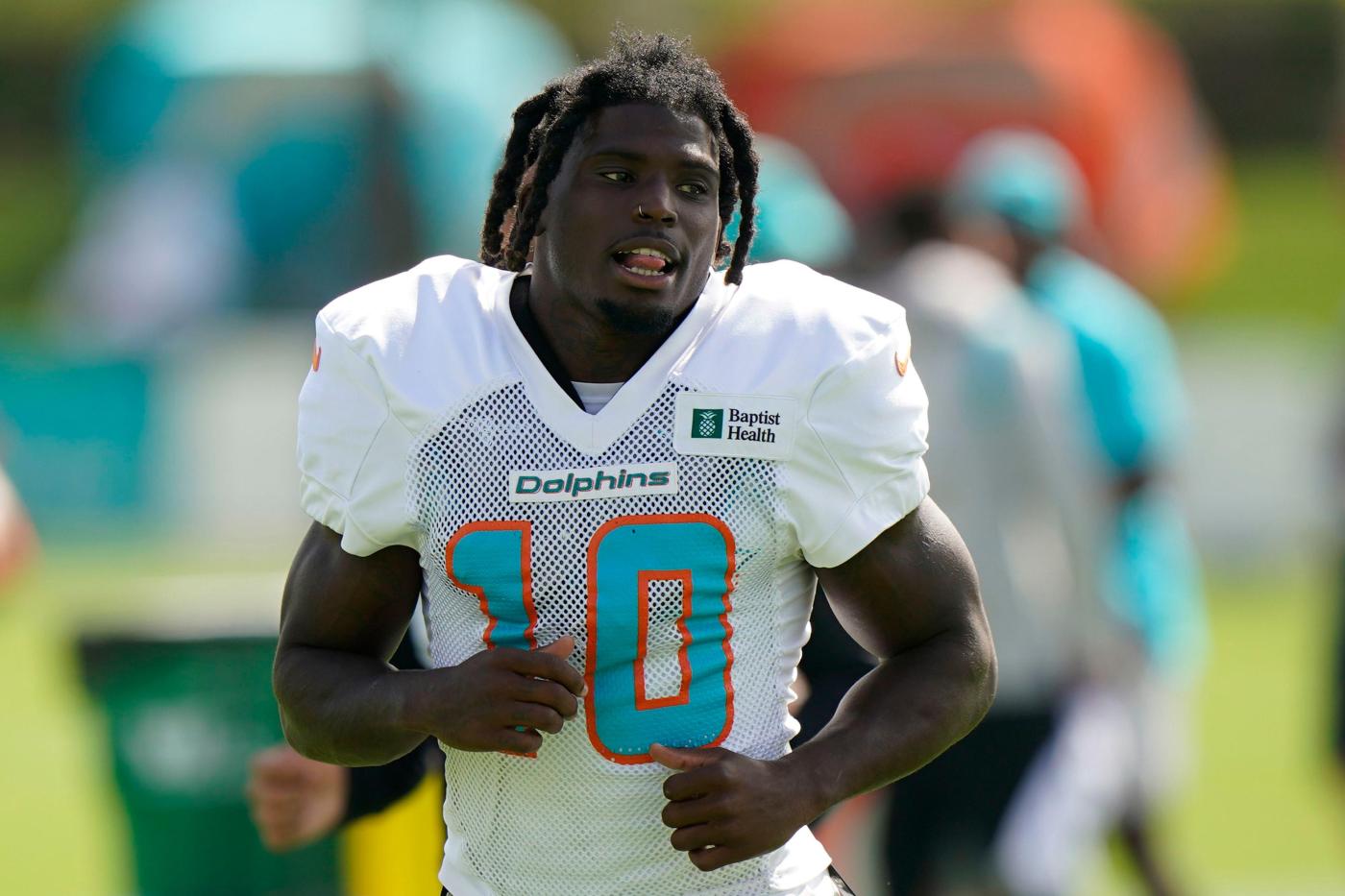 Tyreek Hill has flashed his speed, agility and pass-catching ability plenty in Dolphins training camp through two weeks, but it’s all been against a Miami secondary that doesn’t have cornerback Byron Jones and has seldom trotted out Xavien Howard in 11-on-11 drills.

This coming week, Hill, the Dolphins’ $120 million receiver, will get to showcase his skills against an opponent for the first time with his new team. The Dolphins travel to Tampa for joint practices with the Buccaneers on Wednesday and Thursday ahead of their Aug. 13 preseason game.

The times Hill has faced Howard, mostly in a 1-on-1 setting, Howard has gotten the best of him, deflecting passes or forcing overthrows with tight coverage. It has Hill ready to see something else.

“I’m really sick of going against X. He’s been locking me up in practice,” said Hill, who will get to go against the team he lost to in the Super Bowl two years ago with the Kansas City Chiefs. “I really can’t wait to get to Tampa, and I know the guys are very eager to get down there, as well.”

Hill is a known trash talker who thrives off the competitive nature of knowing there’s extracurricular activity that comes with either winning or losing a rep against an opponent.

“If I don’t talk, I don’t perform because I feel like I perform better under pressure. That’s just my mentality,” Hill said.

“If I’m relaxed, I’m just chilling and just vibing, then I just go with the flow. … Say, for instance, I go against a DB and he don’t say anything to me the whole entire game, to me, I’m like, ‘Okay, we brother-in-lawing it.’ But, if he’s sitting there talking trash to me, doing what he got to do, in my face every play, then I’m going to challenge him back.”

Hill wants his confidence to transcend himself and extend to players with more reserve personalities like quarterback Tua Tagovailoa and fellow wideout Jaylen Waddle. It’s something he takes pride in incorporating with his new younger teammates.

“It rubs off on everyone,” Hill said. “Tua has even been talking trash, so I feel like that’s great for his confidence moving forward, going into these big games that we’re about to play. I’m just like a match. I get the thing started, and everybody else just finishes it.”

For a star receiver, Hill has seen plenty of work during training camp — this when coach Mike McDaniel likes to give established veterans maintenance and load management days.

“I’m going to always go hard,” said Hill, who can also benefit from rapport being built with Tagovailoa in camp. “I don’t care if I’m injured or not. I’m going to go hard. When I’m on the field, I’m going to give my teammates my everything.”

With all the activity, Hill had Wednesday off this week before the team’s Thursday off day and has since returned for Friday and Saturday drills.

“I just got to take time for my body. I’m a fast guy. I feel like only fast guys …read more

Is ‘Eternals 2’ Happening? Patton Oswalt May Have Confirmed it

Eternals introduced a lot of new ideas and characters into the Marvel Cinematic Universe. While it wasn’t beloved by critics, the events of Eternals could have massive implications in the universe going forward. Comedian Patton Oswalt, who voices Pip the troll, may have confirmed an Eternals sequel, whether Kevin Feige wanted him to or not.  […]

Surprise, Locke fam, Dodge is back. A few weeks before the premiere of Locke & Key Season 3, a teaser trailer revealed the demon would return to cause more chaos for the Keepers of the Keys. And now that season 3 has finally arrived on Netflix, we know how Dodge was seemingly able to survive […]

The dining world’s prestigious Michelin Guide on Wednesday named 19 restaurants in Los Angeles and environs as “new discoveries” — a prelude to the release later this year of its California stars. The finds range from a restaurant that showcases refugee cooks from around the world to a museum bistro co-created by culinary legend Alice […]