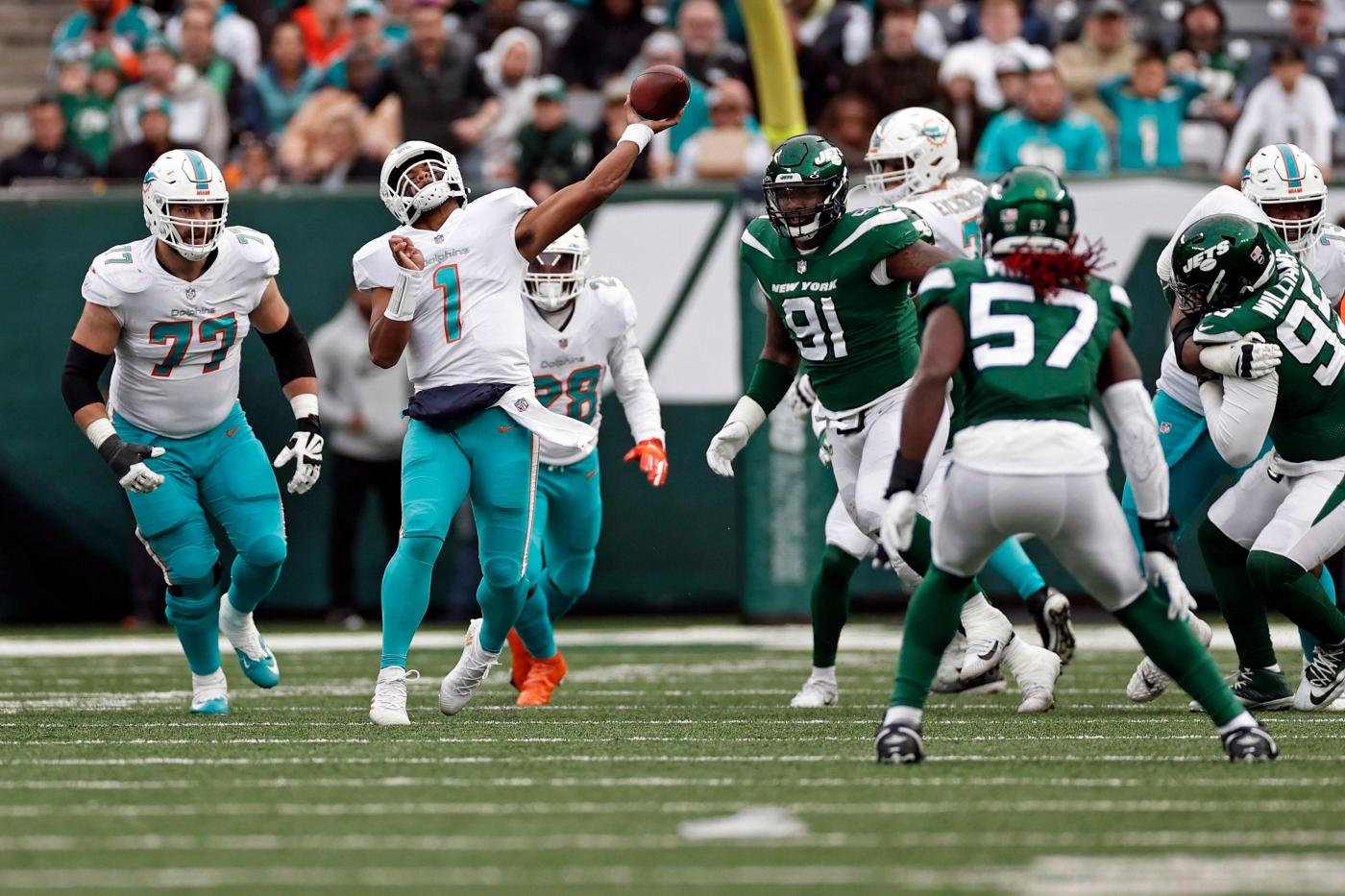 The moment arrived in last Sunday’s 24-17 win over the New York Jets where Miami Dolphins quarterback Tua Tagovailoa had a deep-ball opportunity and connected on it for a touchdown.

He stepped up to avoid initial pressure after his first read, Mike Gesicki, was covered and found an open Mack Hollins down the sideline. With the ball traveling 53.1 yards in the air, per NFL Next Gen Stats, and Hollins tip-toeing down the sideline after getting pushed by a Jets defender following the catch, it went for a 65-yard touchdown. That marked Tagovailoa’s longest scoring strike of his career and first of longer than 20 yards this season.

For Tagovailoa, who is often criticized for a lack of arm strength and also recovering from fractures on his ribs and the middle finger on his throwing hand earlier this season, it had to feel like he got the proverbial monkey off his back.

Tagovailoa has also missed five starts and most of another game with his injuries to lead to that disparity, but even while it took so long to finally see a deep touchdown come to fruition, the Dolphins (4-7) are confident in Tagovailoa’s ability to connect on those.

“We know he can throw the ball down the field,” coach Brian Flores said Monday. “It’s all about the opportunity to do so in a game. We try to create those opportunities with our play design and play-calling. I think there’s a timing element to it.

Hollins’ perspective on Tagovailoa’s deep passing: “It’s 100 percent when it came to me, so I’d say it’s great. The ball was where it needed to be. I was able to tight-rope the sideline because of where the ball kind of turned me in to, so yeah, it went well.”

Now able to connect on open downfield throws against the Jets and the previous week in an upset of the Ravens where Tagovailoa entered in the second half, the hope is he can continue to build on it.

“It starts in practice,” he said. “A lot of the …read more

When Patrick Walsh took over the Serra football program 21 years ago, it wasn’t the powerhouse that it is today. Sure, Tom Brady played for the Padres in the 1990s. But the team wasn’t contending for league and upper-level section championship in those days. But Walsh, a De La Salle product who knows a thing […]

Sitting at her restaurant’s gold-clothed tables bedazzled with Christmas decorations while Univision plays quietly in the background, 31-year-old Eliselda Lombera described the pandemic’s brutal impact on her family’s business. Over the past year and a half, they’ve been forced to lay off all three of their employees, and cut the menu down because of rising […]

Derek Hough from Dancing With the Stars visited Disney World with girlfriend Hayley Erbert after recovering from coronavirus (Covid-19) and fans hope the visit might spark a proposal. Hough, who was tested positive with a breakthrough Covid-19 infection a few weeks ago spent time in quarantine. He was able to spend the Thanksgiving holiday with […]