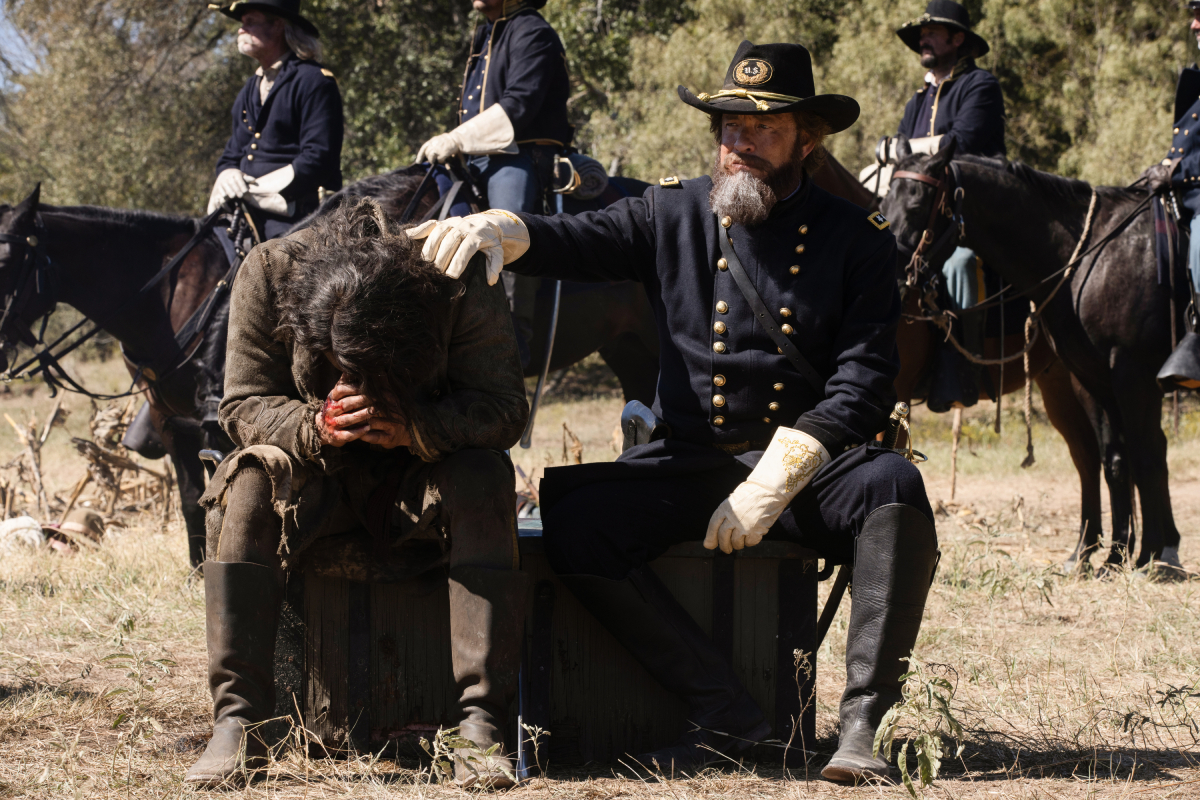 Tom Hanks made a surprise cameo in episode 2 of the Yellowstone prequel 1883.
The series stars country music superstars Tim McGraw and Faith Hill — who happen to be friends with Hanks.
Now, another member of the Hanks family is popping up on the Paramount+ hit.

Tom Hanks made a surprise cameo during a recent episode of the Yellowstone prequel 1883. The two-time Oscar winner was the latest big name to show up in the Taylor Sheridan-verse when he appeared as U.S. Civil War General George Meade. Now, following Hanks’ appearance, another member of his family has signed on for a role in the Yellowstone prequel.

The latest Paramount+ hit is the Yellowstone prequel 1883. Which stars real-life couple and country music superstars Tim McGraw and Faith Hill. They play James and Margaret Dutton, the ancestors of Kevin Costner’s John Dutton from Yellowstone.

James and Margaret are the patriarch and matriarch of the Dutton family. And 1883 tells the story of how they traveled west through the Great Plains to Montana and settled the land that eventually became the Dutton Yellowstone Ranch.

Hanks made his cameo during the second episode of 1883 during a Civil War flashback, and it’s all because he’s good friends with McGraw. The singer told Cinema Blend that he’s known the Saving Private Ryan star for more than two decades. And all he had to do was give Hanks a call.

“Tom and I’ve been friends for 25 years, 24 years. I knew that there was this part in there, and I gave him a call and said, ‘Hey, would you be interested in showing up doing a cameo in this show that we’re doing?’ And he goes, ‘Tell me when to be there,’ and he just showed up,” McGraw explained

According to Variety, Hanks’ wife Rita Wilson will also be joining the Yellowstone universe in an upcoming episode of 1883. She will reportedly play a storekeeper named Carolyn who works at Doan’s Crossing. And she will help Faith Hill’s Margaret Dutton “decompress with some whiskey punch.”

McGraw says that his wife is “best friends” with Wilson, which is why the Sleepless in Seattle star is making a cameo. But, it’s yet to be revealed which specific episode she’ll appear in.

McGraw says that filming scenes with a good friend that he’s known for so long was a special experience. He joked that “you never want to botch a scene when you got Tom Hanks in there with you.” And McGraw revealed that he and Hanks avoided each other before the cameras started rolling.

“We didn’t see each other that whole morning because I didn’t want to see what he looked like. He didn’t want …read more

By Stefanie Dazio and Brian Melley | Associated Press LOS ANGELES — The Coast Guard has announced new safety rules following a deadly blaze that killed 34 people on a scuba diving boat off the California coast more than two years ago, including installation of fire detection and suppression equipment. The Labor Day 2019 fire […]

‘The Vampire Diaries’: Nina Dobrev Revealed Why She Left the Show in an Instagram Post, ‘I Wanted Elena’s Story to Be a Six Season Adventure’