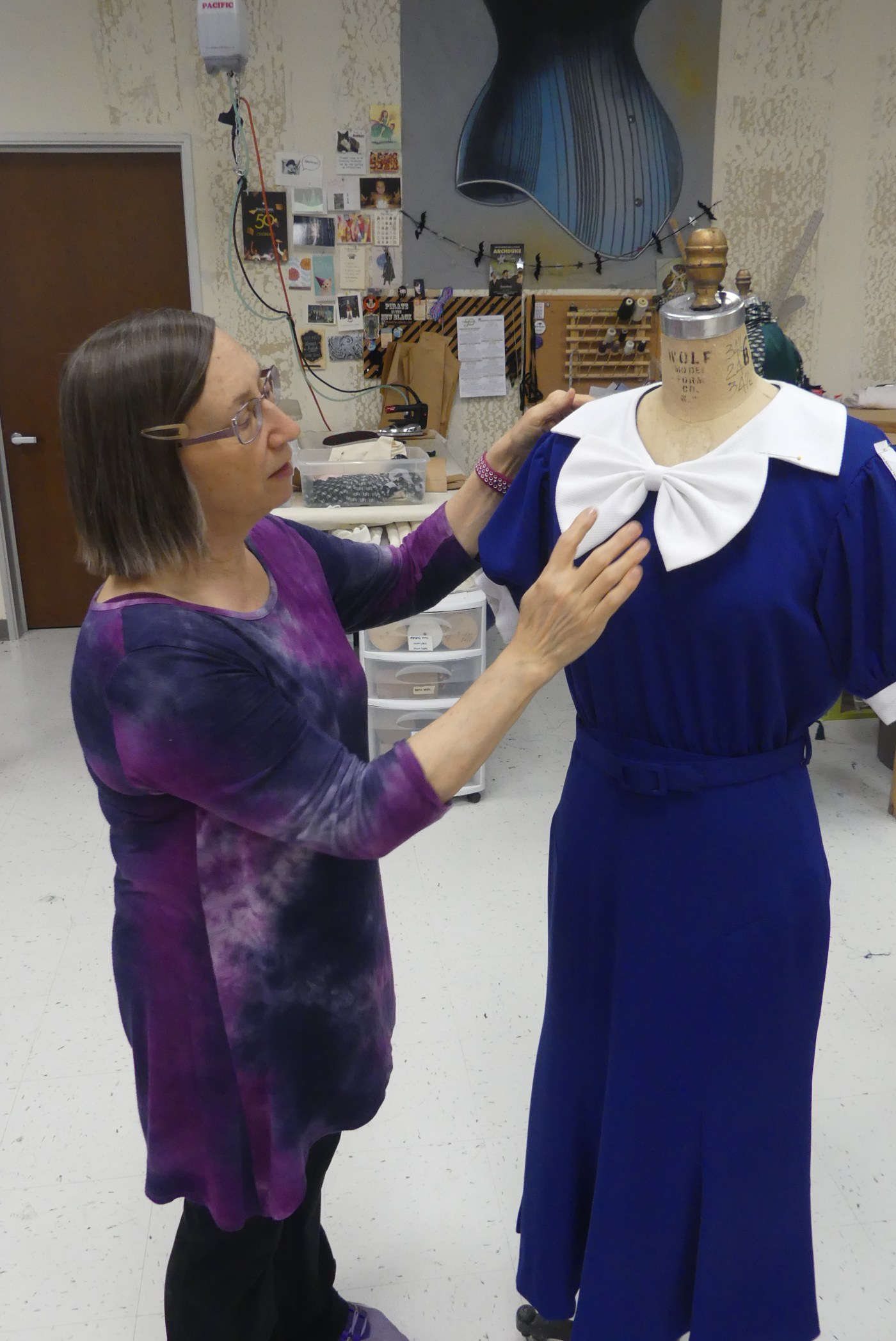 With Bay Area theaters on a hard stop during the coronavirus “shelter-in-place” era, some theaters have devised innovative ways to stay relevant. TheatreWorks Silicon Valley followed the American Conservatory Theatre’s lead in offering streaming performances of TheatreWorks’ production of “They Promised Her the Moon” that patrons could pay to watch at home.

But the temporary demise of local theater means unemployment for more than actors and directors. All the behind-the-scenes production people also have lost work, since there are no sets to design, no lighting designs to create, no costumes and wigs to make and no casts to audition.

TheatreWorks costume director Jill Bowers was smack in the middle of creating more than 100 costumes (from costume designer B. Modern’s period sketches) for the theater company’s now-postponed production of “Ragtime,” currently scheduled to open in the spring of next year.

Modern’s costume sketches were mostly finalized, and Bowers and her seamstress crew had finished what she describes as a “full round of fittings with the entire cast. In fact, we had just finished costuming four of the characters–complete with wigs–for a publicity photo shoot that took place just before the virus spread.”

Because she already has a full staff and crew of seamstresses in place, Bowers says that she’ll continue the “build” (a theater term for sewing), with most of them working on the costumes at home.

This means they‘ll also continue to be paid–at least for now–and it postpones the need to lay them off, she adds. “But when we can’t progress any further without actors for more fittings, we’ll have to store the show-in-progress until we can resume.”

Modern says she started researching “Ragtime” last summer, first by reading the book and watching the 1981 film to give her a “good sense of the characters.” Many meetings with TheatreWorks’ outgoing artistic director Robert Kelley followed as she began sketches of those characters. “At the same time, my assistant and I began pulling possible costumes from other theaters as well as from TheatreWorks’ own costume shop.”

But after the coronavirus spread and locked down all theater productions, Modern says she started archiving her information, tracking down a few more pieces of fabric, “and now my part is on hold until next year.”

Modern, who’s a much-sought after costume designer in the Bay Area, suffered a second costume setback when Santa Cruz’s Jewel Theatre production of “Heisenberg,” scheduled to open on March 20, was canceled. Ironically, “Heisenberg” has the subtitle “The Uncertainty Principle.” Although the show made it through the first and second dress rehearsals, it then closed for the duration of the quarantine and is currently scheduled to open in June.

Costumers throughout the South Bay are facing similar situations.

Freelance costume designer Pat Tyler—who has costumed innumerable shows for Palo Alto Players, Los Altos Stage Company and City Lights Theater Company, among others—says she was “in the middle of costuming ‘Sunday in the Park with George’ at LASC when everything was halted. We had just done the photo shoot two weeks ago, but now it seems like months …read more

Kylie Jenner misses being able to hang out face-to-face with her friends. On Friday, the Keeping Up with the Kardashians star, 22, uploaded a video on her YouTube channel on Friday, which was recorded several weeks before she began practicing social distancing amid the coronavirus pandemic. “Hi guys! We filmed this a few weeks ago […]

Maggie Grace is going to be a mom! The former Lost actress and her husband Brent Bushnell are expecting their first child this summer, Grace announced on Instagram Friday. “In the midst of these uncertain times, we’ve been blessed with a joyful reminder of what’s most important,” the Fear the Walking Dead star, 36, wrote […]

Tearful Dolly Parton Says ‘My Heart’s Broken’ in Tribute to Kenny Rogers: ‘I Will Always Love You’

Dolly Parton is mourning the death of her friend and collaborator Kenny Rogers. Hours after news broke of the country music icon’s death at 81, Parton posted a heartfelt video tribute to Rogers. “Well, I couldn’t believe it this morning when I got up, turned on the TV, checking to see what the coronavirus was […]