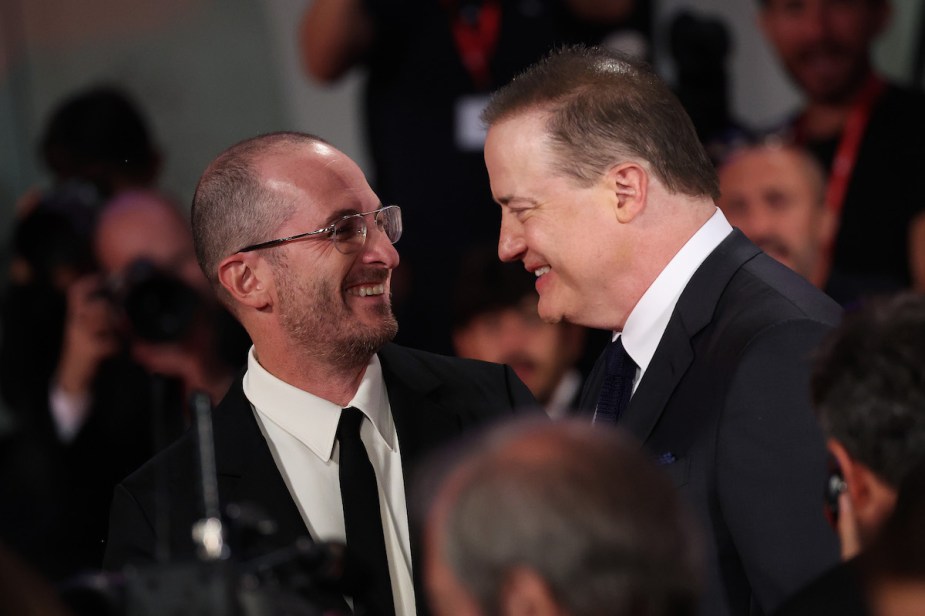 Brendan Fraser is gearing up to make his comeback as the leading man in Darren Aronofsky’s upcoming drama The Whale. Although The Mummy star’s return to the big screen has already garnered widespread critical praise following its premiere at the 2022 Venice Film Festival, Fraser wasn’t exactly Aronofsky’s first choice.

Here’s why the director struggled to find an actor to play the character of Charlie in his newest film and how he eventually landed on Fraser.

The Whale is the latest project from Aronofsky, who’s best known for directing Requiem for a Dream, Black Swan, Noah, and Mother!, among others — many becoming the subject of rave reviews.

It follows the story of Charlie (Fraser), a reclusive English teacher suffering from severe obesity. In one last attempt to redeem himself, Charlie tries to rekindle his relationship with his 17-year-old daughter, Ellie (Sadie Sink). The Whale is based on the play of the same name, written by American playwright Samuel D. Hunter.

As for the cast, most will recognize Fraser from his role as Rick O’Connell in The Mummy trilogy. He also starred in the medical comedy Scrubs from 2001-10, in addition to playing the titular character in 1997’s George of the Jungle.

Sink is best known for playing Max Mayfield in Netflix’s hit sci-fi series Stranger Things. Additionally, she appeared in the music video for Taylor Swift’s All Too Well: The Short Film in 2021. The Whale also features Hong Chau as Liz, a nurse and Charlie’s best friend, Samantha Morton as Charlie’s ex-wife Mary, and Ty Simpkins as religious missionary Thomas.

The Whale premiered at the recent Venice Film Festival on September 4, 2022. Videos from the event showed attendees giving the movie a seven-minute standing ovation. In an especially heartwarming moment, cameras caught Fraser in tears; he was visibly moved by the applause. So far, the film has earned 84% on Rotten Tomatoes.

The Whale is shaping up to be a serious contender in this year’s awards season. Fraser is already receiving widespread critical praise for his portrayal of Charlie. Many speculate that the performance will land him a Best Actor nomination at the 2023 Academy Awards Ceremony.

Fraser also recently received the TIFF Tribute Award for his leading role in the film. During his acceptance speech, the 53-year-old actor expressed gratitude toward Aronofsky, saying, “Art is about taking a risk, and you should know that they took a chance on me.”

THE WHALE: Believe the hype about Brendan Fraser’s career reboot and awards prospects. He’s a revelation as the 600-lb. Charlie, a man whose obesity controls his body but not his mind. Darren Aronofsky, artisan of lost souls, finds compassion in the oddest of situations. #TIFF22 pic.twitter.com/b540KznN3Z

But despite the current buzz surrounding …read more

Early Wednesday morning, sitting in the bowels of Camden Yards, executive vice president and general manager Mike Elias admitted the Orioles’ strongest season since his arrival “crept up” on him and those on the field. This was all ahead of schedule. Next season, Elias aspires Baltimore to be a playoff-bound team, competing in the difficult […]

DENVER — Jimmy Garoppolo perilously dropped back to pass, then egregiously step out of the back of the end zone for a safety. Stunningly, that still wasn’t the worst thing to happen on that pivotal play for the 49ers in Sunday night’s 11-10 loss with the Broncos. All-Pro left tackle Trent Williams exited with a […]

Taste-Off: The best Italian breadcrumbs — and the crummiest

Busy days and scant time to think about dinner plans mean it’s the season for shortcuts – like seasoned breadcrumbs. Whether you’re working with meat or veg or throwing together a quick casserole, pre-dried and crushed crumbs can be a huge time-saver, as they add crunch and flavor to everything they touch. Breadcrumbs, typically found […]