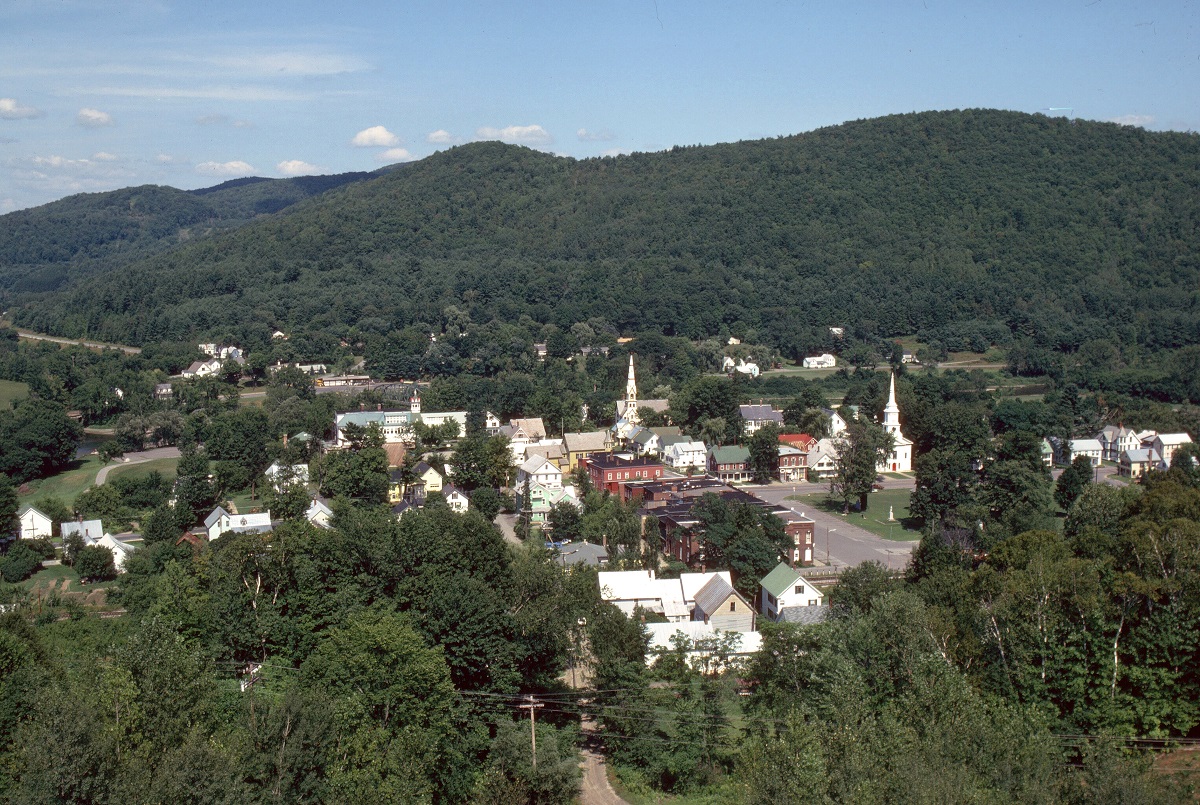 The infamous Gilmore Girls’ town, Stars Hollow, was supposed to be nestled somewhere in the middle of Connecticut. The state is known for its fall foliage, and the series absolutely used that as inspiration for its intro. While the intro for Gilmore Girls captures the fall colors that Connecticut is known for, the overhead footage was shot in a completely different state.

The Gilmore Girls intro offers fans an overhead view of a quaint New England town surrounded by trees in various shades of orange and red. It makes for the perfect opening, and if you only took a quick look once, you’d assume it was the town of Stars Hollow shown from a bird’s eye vantage point.

The opening credits utilized a real New England town, but it isn’t in Connecticut. The town in the opening shot of the Gilmore Girls intro is actually Royalton, Vermont. Royalton is a tiny town in Windsor county, Vermont. The town, with under 3,000 residents, is flanked by the Green Mountains on one side and the White River on the other.

Royalton, Vermont, may not be Stars Hollow, but the tiny town is a fairly good stand-in. The town even has a Gazebo, just like Stars Hollow. Still, it isn’t the town that inspired the famed series and its beloved tiny hamlet. The inspiration for Stars Hollow is Washington Depot, Connecticut.

Washington Depot is a neighborhood inside the small town of Washington, Connecticut. With a population of just over 3,000, the town embodies small-town living. Just like Stars Hollow, Washington has a neighborhood eatery and even a bookstore similar to Stars Hollow Books. According to the town’s official tourism page, Gilmore Girls creator, Amy Sherman-Palladino, was inspired to create Gilmore Girls by the warmth of the town during her stay at the Mayflower Inn & Spa.

How far is Royalton, Vermont, from the fictional town of Stars Hollow?

Stars Hollow doesn’t actually exist. Still, Gilmore Girls offered enough context clues to decipher roughly where in Connecticut it was supposed to be located. Stars Hollow was about 25 minutes from Hartford, Connecticut, and just over 20 miles from Yale in New Haven, Connecticut.

‘Gilmore Girls’: Where Exactly in Connecticut Was Stars Hollow?

While Stars Hollow doesn’t actually exist, based on clues from the series, the town would sit right where Meriden, Connecticut, is located. Meriden is in New Haven County. With a population of over 60,000 residents, it’s much larger than Stars Hollow. It still has a quaint downtown shopping district and the distinct fall vibe that Gilmore Girls fans have grown to love, though.

If we assume Stars Hollow sits where Meriden sits in real life, the town used in the Gilmore Girls intro isn’t exactly nearby. Royalton, Vermont, is nearly 200 miles north of Meriden. …read more

Recapping the Chicago Bulls: A complete collapse in Indiana after leading by 21 squanders a chance to make a jump in the East

The Chicago Bulls couldn’t last more than three games without a collapse. Tuesday night’s game in Indianapolis should have been a chance for the Bulls to make a leap in the Eastern Conference standings. With Tyrese Haliburton sidelined by a sprained elbow and bruised knee, the Indiana Pacers had drifted tantalizingly within reach as a […]

‘The Traitors’: Amanda Reveals Why She Exited the Show — ‘Your Girl Is Not a Quitter’

Cirie Fields and Amanda Clark | Photo by: PEACOCK Amanda Clark departed Ardross Castle in ‘The Traitors’ Episode 5 Amanda Clark was among the 17 faithfuls in The Traitors Season 1. She also belonged to the group of 10 contestants who had never appeared on reality television prior to the Peacock series. Amanda is originally […]

Kanye West and Taylor Swift at the 2009 VMAs | Jeff Kravitz/FilmMagic In 2009, Taylor Swift won the MTV Video Music Award for Best Female Video. In the middle of her acceptance speech, Taylor Swift and Kanye West’s memorable interaction at the 2009 MTV VMAs is one of the most infamous awards show moments. The […]