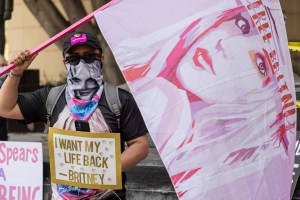 However improbable, this has become the summer we talk about conservatorship.

As the latest developments in Britney Spears’ 13-year conservatorship dominate the headlines, questions long debated by advocates have suddenly become dinner table conversation. When is it OK to strip people of their rights to protect their welfare? Can we trust the legal system to protect against abuse?

The 39-year-old pop star gave explosive testimony at a June hearing in a Los Angeles probate court, saying her conservators have kept her from removing a birth control device, forced her to take medications and required her to continue performing.

“It makes no sense,” she told the judge. “The laws need to change.”

Even before Spears’ situation captured the public’s attention, state policymakers have debated changing California’s conservatorship laws for an entirely different reason: The increasing visibility of people living on the streets with untreated serious mental illnesses.

Proposed legislation that would change the state’s “grave disability” standard to make it easier to conserve people with serious mental illness has been tabled this year. Meanwhile, a bill inspired by the Spears case that requires increased transparency and stricter accountability continues to move through the Legislature.

These seemingly incongruous conservator situations in California have generated a lot of confusion. Is it too easy to put people on conservatorships — or too difficult? Does the process violate people’s rights — or keep them safe?

People on all sides of the conversation agree change is overdue. But their visions of what the problem is — and where the solutions lie — often vary.

What is a conservatorship, anyway?

A conservatorship is a legal arrangement in which a court appoints a representative to make decisions on behalf of the “conservatee,” a person deemed so cognitively impaired due to dementia, intellectual disability or serious mental illness that they cannot make decisions independently. These include everything from the rights to make medical and financial decisions, to control of basic life choices, like where to live and whether to have sex or marry.

In some states, such arrangements are referred to as “guardianships.” In California, though, that term is reserved for arrangements involving children.

How does conservatorship work in California?

In the Golden State, there are two types of conservatorship.

By contrast, Lanterman-Petris-Short conservatorships are designed for people with serious mental illnesses who are so “gravely disabled” they cannot provide for food, clothing and shelter. These conservatorships, which are also decided by county judges, must be renewed annually. They get their name from a 1967 law, proposed by Republican Assemblyman Frank …read more

As the highly contagious delta virus variant drives up COVID-19 cases throughout California, the state Monday announced it will require all public and private health workers as well as state employees to show proof of vaccination or be subject to at least weekly testing for the disease. The order means health and state workers will […]

SAN JOSE — An apartment complex in downtown San Jose is slated to become the first property unloaded as part of the auction of the pieces of the real estate empire of a bankrupt developer implicated in a federal fraud case. The first property to find a potential buyer — at a $54.2 million price […]

Previewing Pac-12 media day: Kliavkoff on the clock, Edwards in the spotlight and Rolovich via Zoom (things could get interesting)

The 2021 edition of the Pac-12’s midsummer media gathering will feature a new boss, a remote coach and a recruiting scandal — all of it cast against forces of momentous change in college sports. The festivities begin Tuesday at 8 a.m., with remarks from commissioner George Kliavkoff, followed by interviews with players and coaches. If […]