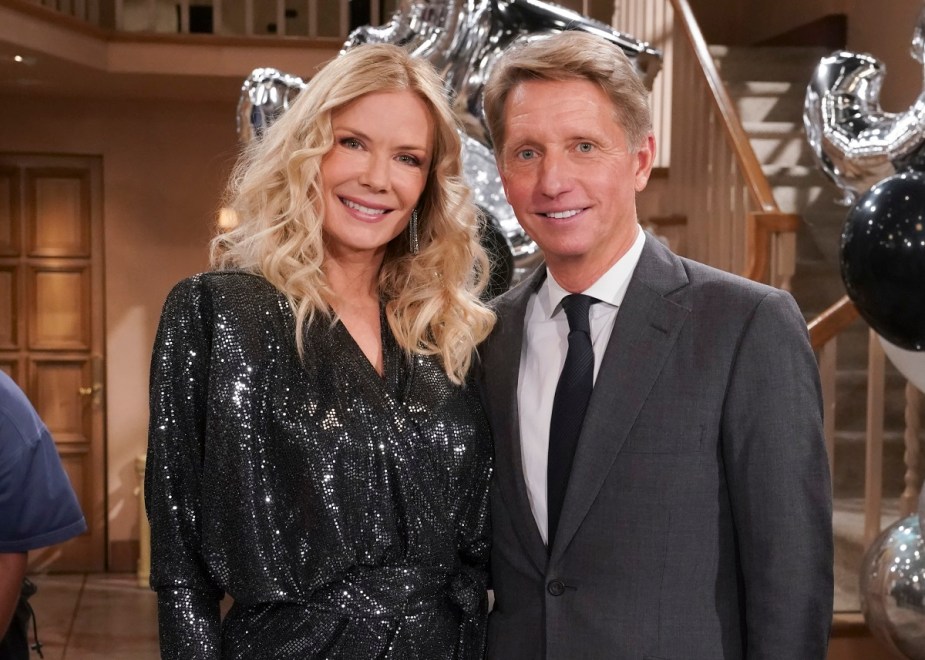 Brooke has been a vital part of The Bold and the Beautiful since its debut in March 1987. Most of Brooke’s storylines include her

Brooke Logan (Katherine Kelly Lang) is an iconic character on The Bold and the Beautiful. Since 1987, the blonde beauty has been creating trouble for other characters. Yet, the writers want fans to forget about Brooke’s unsavory past.

Brooke has been a vital part of The Bold and the Beautiful since its debut in March 1987. Most of Brooke’s storylines include her on-again, off-again relationship with Ridge Forrester (Thorsten Kaye). Brooke and her destiny have gone through many challenges to be together. Although Ridge moved on with other women, including Taylor Hayes (Krista Allen), Brooke wasn’t willing to let him go.

She tends to be deceitful and pulls numerous tricks to snag Ridge. However, on the Sept. 19 episode, a comment by Brooke had fans up in arms. Brooke commented how she never interfered in Ridge and Taylor’s relationship. Fans quickly turned to Twitter, calling out the show for rewriting Brooke’s history.

Ridge intervenes when Taylor and Brooke bicker. See what happens on today’s all-new episode of #BoldandBeautiful on @paramountplus: https://t.co/UzXuhh7Lhz pic.twitter.com/B3Qgc7aioG

RELATED: ‘The Bold and the Beautiful’: Katherine Kelly Lang Says Brooke Is ‘a Fine Line Between Good and Bad’

“@BandB_CBS @CaseyKasprzyk Please stop ignoring the history of your show!! We REMEMBER all the nasty ish Brooke pulled,” wrote one viewer.

“Ok, writers, we Tridge fans know every underhanded and manipulated thing Brooke Logan did to come between Taylor and Ridge’s marriage. You guys really think we wasn’t going to catch that rewrite of Brooke Logan history,” another user ranted.

“Yeah, Brooke saying she couldn’t help it, she loved Ridge & he loved her back – like if that’s all that was in play – she actively interfered and pursued Ridge while he was married to Taylor. She won’t own that, which is why I can’t stand her,” wrote another commenter.

Brooke Logan has a history of being manipulative

The Bold and the Beautiful may want to rewrite Brooke’s history, but fans won’t forget the stunts she’s pulled. Brooke has a long history of manipulative behavior when it comes to Ridge. Even when Ridge was married and had kids with Taylor, Brooke relentlessly pursued him.

Longtime fans will never forget how Brooke paraded around in her lingerie at the office trying to seduce Ridge. Also, who can forget that Brooke kept Thomas Forrester’s (Matthew Atkinson) paternity a secret so Ridge wouldn’t leave her? While Ridge and Taylor were the targets of Brooke’s scheming, she’s also caused pain for others.

When Brooke wasn’t busy with her personal life, she inserted herself into Hope Logan’s (Annika Noelle) love life. Brooke encouraged Hope to fight for Liam Spencer (Scott Clifton), even though he was with Steffy Forrester (Jacqueline MacInnes Wood). Also, Brooke encouraged her sister …read more

As “Don’t Worry Darling” arrives in theaters Friday as 2022’s “hottest movie mess,” a new report offers another look at the dysfunctional production with allegations Olivia Wilde and Florence Pugh were “screaming” at each other because director Wilde allegedly made herself scarce from the set to be with new boyfriend, Harry Styles. As Vulture also […]

Senior royal family member Kate Middleton stood alongside her husband, Prince William, and two of her three children at the funeral of Queen Elizabeth II. During the service, held at Westminister Abbey, the newly-minted Princess of Wales appeared to have difficulty containing her feelings. The ordinarily stoic royal “struggled” to “hold it together,” claims a […]

A self-described “incel” accused of filming himself using vulgar language, making inappropriate sexual requests and pepper spraying women in Costa Mesa made his first court appearance Monday, Sept. 27, according to arrest and court records. Johnny Deven Young, 25, was brought back to Orange County by sheriff’s officials on Sept. 21, five months after Costa […]