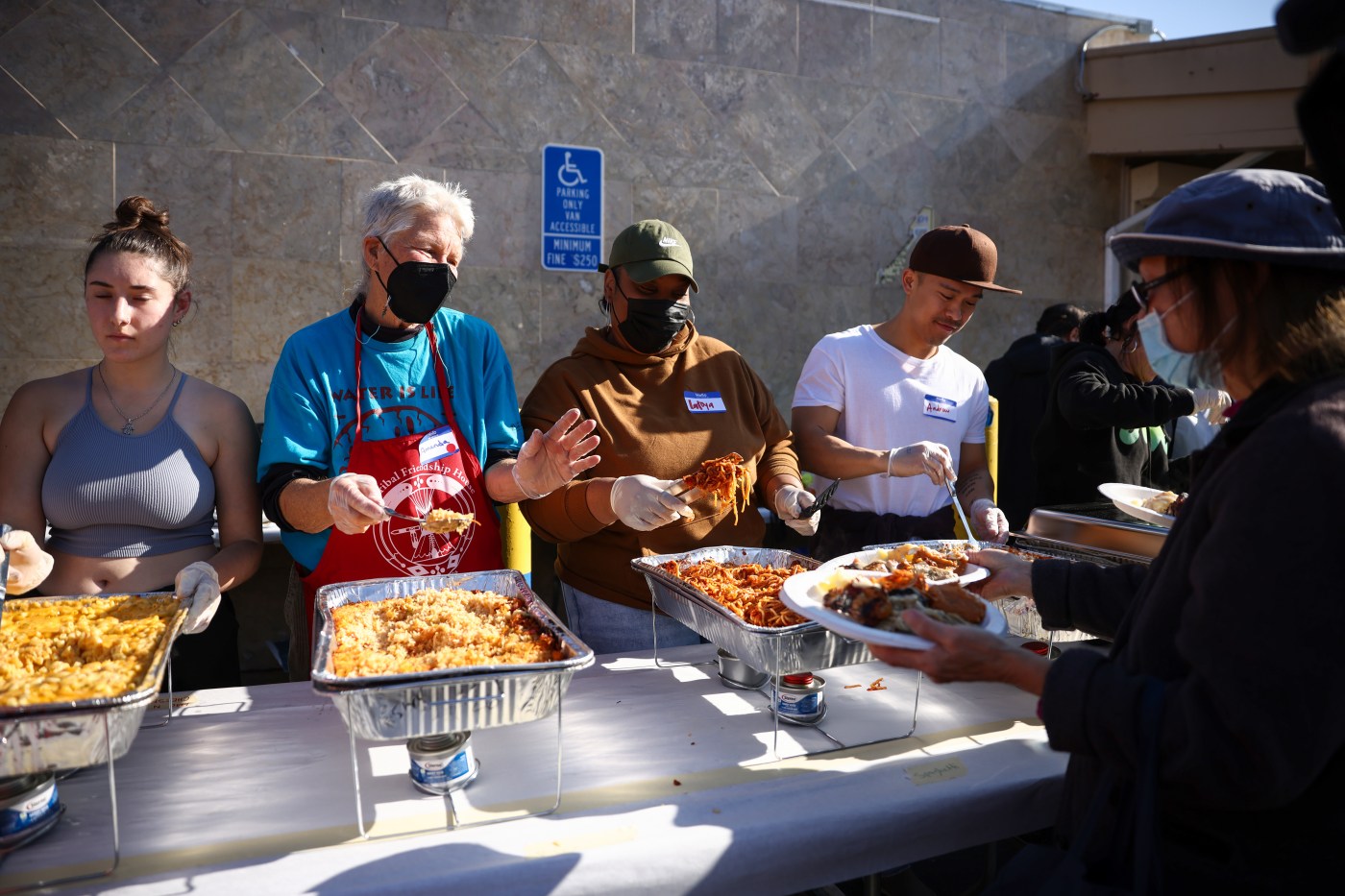 It didn’t take Toby Chacon long to clean his plate on Thanksgiving Day.

“I was hungry,” said the San Jose resident. “I was waiting for it for two days.”

Fortunately for Chacon and others in attendance, seconds —and thirds, as much as hungry diners wanted — were being handed out at a CityTeam ministries Thanksgiving event on Thursday in San Jose, one of many such meals across the Bay Area, as volunteers reached out to people in their communities who don’t have access to many comforts that residents take for granted.

In San Jose, volunteers and staff members at the nonprofit joined forces to provide free hot meals for an expected 300-plus individuals, filling bellies with turkey, mashed potatoes and all the trimming while putting plenty of big grins on faces that might not have otherwise had much to smile about during the holiday.

Seeing people enjoying the occasion together in the dining room — as opposed to just lining up to receive to-go Thanksgiving meals, as was the case during the pandemic — gave organizers another reason to be thankful.

“We are excited because it’s the first year that we have been able to bring people back indoors,” says Steven Martinez, program director for CityTeam.

Smiles also abounded at Oakland’s Two Star Market, where a long-held Thanksgiving Day celebration went from a takeout operation in 2020 to a sit-down meal (with social distancing restrictions) in 2021 to this year’s, which felt like a shared experience once again.

“It’s an amazing tradition,” said former Oakland Mayor Jean Quan. She has been involved in the event for years and made Brussels sprouts and pecans for this year’s feast. “It’s one of the nicest mixes in Oakland, both in the variety of food and the variety of people.”

This year’s feast marked the event’s 20th year, all in the parking lot of Two Star Market in Oakland’s Dimond District. It began as a way for the market’s owners to practice their Muslim faith and tend to the needs of others — catering a meal for whomever could show up. That first year was a humble affair, with about 50 people in attendance.

On Thursday, 150 volunteers buzzed around the market’s parking lot — ferrying food to serving tables, grilling scores of chicken legs and doling out dozens of pieces of pie under sunny, idyllic skies. They planned to serve 1,000 meals — including about 800 to people lined up down the block from their market. Organizers also planned to deliver meals to several nearby senior homes, in case their residents couldn’t make the trip.

“It turned out to be very communal — a day of celebration,” said Farouq Alawdi, 35, a co-owner of the Two Star Market.

“It’s a tradition — it brings a whole background of nationalities and religions together,” said Joseph Kearse, 55, who has volunteered at the event for eight years.

The meal is open to anyone, resulting in a broad, diverse …read more

Led Zeppelin ‘Coda’ Review: A Look at the Band’s Final Album on its 40th Anniversary

Led Zeppelin owed the label one more album after they broke up Zep drummer John Bonham died on Sept. 25, 1980. A day of hard drinking as the band rehearsed for a North American tour led to him dying in his sleep. Jimmy Page revealed Led Zeppelin established themselves as one of the world’s premiere […]