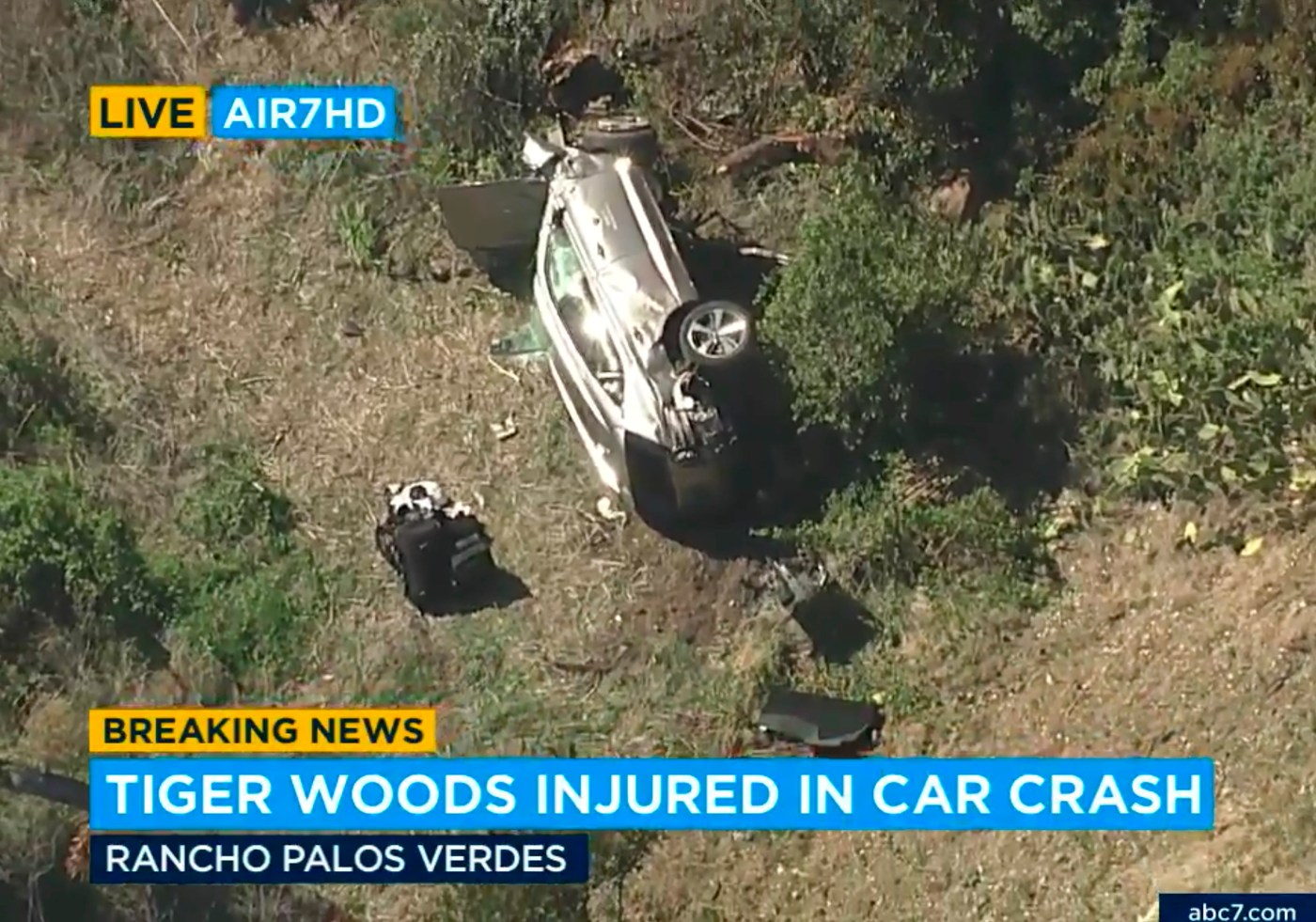 LOS ANGELES — Tiger Woods crashed his SUV on sweeping, downhill road in the Los Angels suburbs Tuesday morning, and doctors tried to stabilize “significant” injuries to his right leg with rods and a combination of screws and pins.

Woods was driving to a television shoot when his SUV crashed into a median, rolled over and ended up on its side near a steep road known for wrecks, authorities said. Golf’s biggest star had to be pulled out through the windshield.

Woods’ foundation said in a statement he was awake, responsive and recovering in the hospital.

Dr. Anish Mahajan, the chief medical officer at Harbor-UCLA Medical Center, said Woods shattered the tibia and fibula bones of his lower right leg in multiple locations. Those injuries were stabilized with a rod in the tibia. Additional injuries to the bones in the foot and ankle required screws and pins, Mahajan said in a statement released on Woods’ Twitter account late Tuesday night.

A resident near the accident site called 911. A Los Angeles County sheriff’s deputy, the first on the scene, poked his head through a hole in the windshield to see Woods, his seatbelt fastened, sitting in the driver’s seat.

The single-car crash was another setback for Woods, the preeminent golfer of his generation who has spent the last decade in a cycle of injuries, self-inflicted personal problems and an arrest for DUI. Each time, he returned to the course and won.

Even at 45, Woods is among the more recognizable sports figures in the world and remains golf’s biggest draw. His 2019 Masters victory was seen as a transcendent comeback and further cemented his reputation for toughness and clutch performances. Briefly Tuesday, the world paused and worried that Woods might be critically injured or worse. As it became clear that his life wasn’t in danger, the obvious question came out: Can he play golf again?

“As if his body hasn’t endured enough,” Jon Rahm, the No. 2 player in the world, said from the Workday Championship in Florida. “I just hope he can get out of the hospital after recovery and he can still play with his kids and have a normal life.”

No charges were filed, police said there was no evidence he was impaired and no one else was injured.

It was the 10th surgery for Woods, who has suffered knee, back and neck problems for more than a decade.

Woods was in Los Angeles over the weekend as tournament host of the Genesis Invitational that ended Sunday, and then to film content for his sponsor, Discovery-owned GOLFTV. He was not playing while recovering from a fifth back surgery on Dec. 23.

Woods was alone in the SUV when it crashed into a raised median, crossed two oncoming lanes and rolled several times, authorities said at a news conference. Police said Woods was alert as firefighters pried open the front windshield to get him out.

NEW YORK  — The riverbed, more than anything else, needed to be exactly right. In Lee Isaac Chung’s Arkansas-set family drama, “Minari,” land is something more than a setting. It’s a future. It’s a dream. Jacob Yi (Steven Yeun) has moved his family to a wide-open Arkansas plot to farm the land and, hopefully, release […]

OAKLAND — Multiple officers within the city’s animal services department neglected or abused cats and dogs repeatedly and bullied a supervisor and others who tried to curb their behavior, a lawsuit filed against the city alleges. In the lawsuit, a former Oakland Animal Services manager, Denise BonGiovanni, alleged that other employees harassed, discriminated against and […]

OAKLAND — Dozens of parents, students and teachers of the Oakland Unified School District gathered Sunday at Eastshore Park to call on district officials to reopen schools as the spread of the deadly coronavirus pandemic continues to slow. It’s been nearly a year since schools in the Bay Area’s third-largest city closed down at the […]