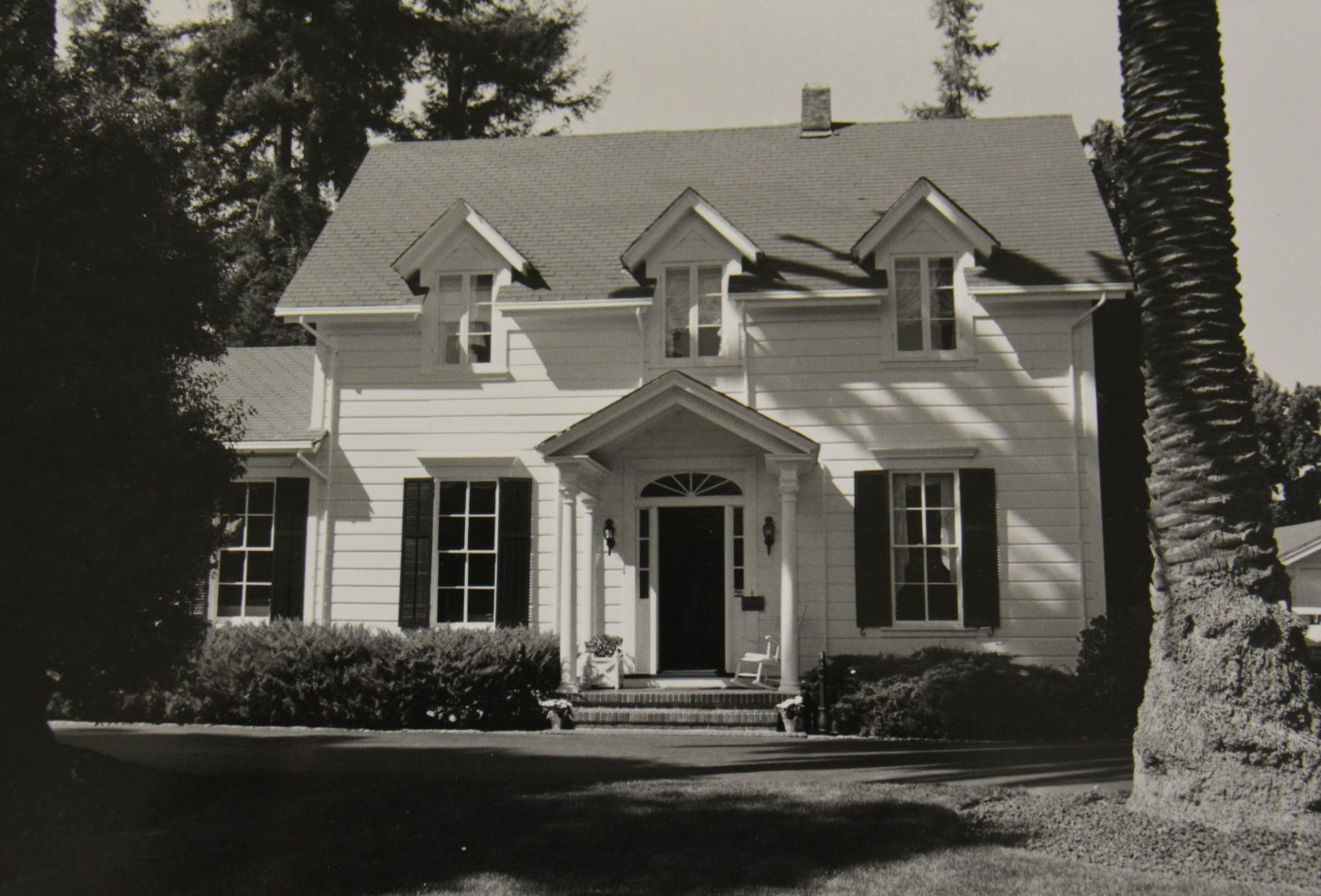 After the first house built in Sunnyvale—the Murphy’s Bay View home of 1850—was demolished in 1961, the Wright House became the oldest house in the city. The exact year the wooden frame structure was built is unknown, but 1862 seems to be the year on which most sources agree.

The house had a variety of styles ascribed to it before a major renovation at the beginning of the 20th century, and several more since then.

The original Pioneer look is typical of the style settlers from the East Coast were erecting in the West, copying what they knew from home: the simple shape of an I or L and a hipped roof with a gable. The man who built the house, William Wright, was just such an East Coast man. He came from Maryland in 1849, at age 23, to seek his fortune in the gold fields of California.

After a few years of checkered success in mining and running a store, Wright gave up prospecting and came to the Santa Clara Valley. He bought 160 acres of land from Martin Murphy, Jr., and since he had never farmed before, hired a foreman at $100 a month (one source says per year) to teach him. He grew wheat and barley and raised stock, and after a year was successful enough to buy an additional 160 acres.

Eventually, he added fruit to his crops and enlarged his property to about 640 acres total—the area from today’s Homestead Road to Knickerbocker Drive or even as far as El Camino Real, and from Mary Avenue to Bernardo Avenue.

In preparation for bringing his bride Helena from Maryland, Wright expanded his house in a Gothic Revival style, with a centered gable and a full-width open porch, as depicted in an 1876 lithograph. The Wrights had two children, William Tarleton and Dora, and after Wright’s death in 1890, his widow managed 220 acres of the property, whereas their son inherited 25 acres and the house.

The younger William’s life was cut short by an accident in 1912, when his clothes were caught in the machinery of the well pump. His mother Helena died just year later. This left William T.’s widow, Ada, and her three children trying to keep the orchard property going. Ada appealed to the city of Sunnyvale to name the milelong driveway up to the house Wright Avenue. The family eventually lost the house during the Great Depression.

Following the sale, a string of owners lived in the Wright house, including a retired GM executive; Sunnyvale’s first city manager, Ken Hunter; a local veterinarian, Dr. Humphrey; the Seagraves; and Michael Malone, the current owner.

In 1961 Humphrey petitioned the city to subdivide the remaining 1.56 acres of the Wright property, claiming that the land required too much maintenance. A Feb. 24 newspaper article from that year makes a dramatic statement about the decision the planning commission was faced with: “whether Sunnyvale should have a historical past—more to the point, whether a historical landmark should be removed in favor of modern housing. …read more

DANVILLE— A private school in Danville had its virtual Lunar New Year celebration disrupted by racist language and lewd images, the latest attack against Asian Americans in the Bay Area. Bay Valley Chinese School was celebrating the Chinese New Year Friday through an online Zoom event, which was open to the public. But during the […]

Drew Remenda will be back on NBC Sports California’s airwaves Thursday night when the Sharks play the St. Louis Blues at Enterprise Center. Remenda, a former Sharks assistant coach and popular longtime color analyst with the team’s television broadcasts, will be part of the network’s pregame and postgame shows with studio host Brodie Brazil. The […]

By Rachel Bluth | California Healthline ANTIOCH — A mobile “strike team” is bringing vaccines to some of the Bay Area’s most vulnerable residents along with a message: This is how you avoid dying from COVID-19. So far, that message has been met with both nervous acceptance and outbursts of joy from a population that […]