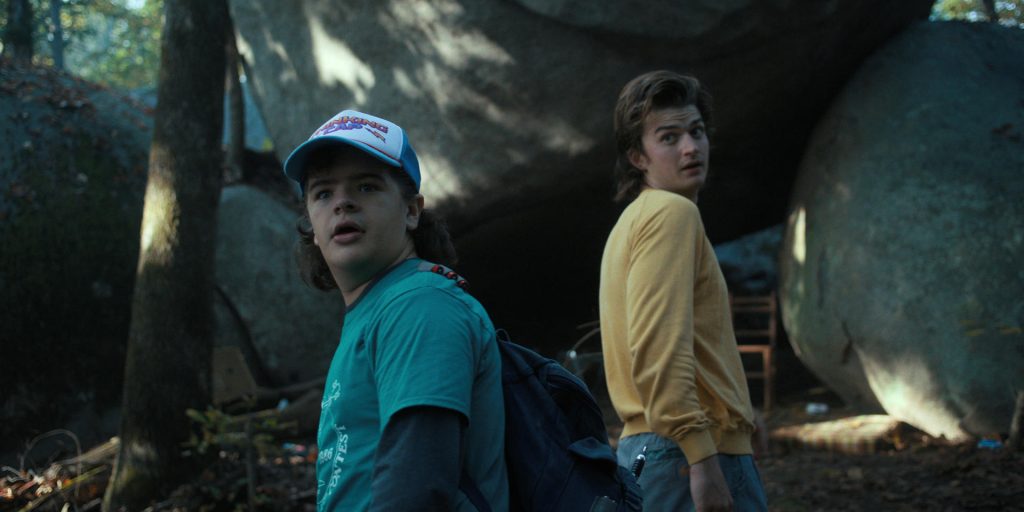 Fans think Dustin could be screaming as he watches Steve die in ‘Stranger Things 4’ Vol. II

In a blink or you’ll miss it moment, Dustin appears distraught and screaming in the new Stranger Things trailer. Could he be witnessing Steve under attack by Vecna, a demogorgon, more

A new trailer for Stranger Things 4 Vol. II has many fans worried about Steve Harrington’s (Joe Keery) fate. Steve appears ready for battle in the sneak peek of the conclusion to the Netflix series. However, Dustin Henderson’s (Gaten Matarazzo) face says it all. Is he screaming about Steve or another character? Let’s unpack what might be happening in this scene from the final chapters of Stranger Things.

Fans think Dustin could be screaming as he watches Steve die in ‘Stranger Things 4’ Vol. II

In a blink or you’ll miss it moment, Dustin appears distraught and screaming in the new Stranger Things trailer. Could he be witnessing Steve under attack by Vecna, a demogorgon, more demobats, or something worse?

“Dustin is screaming,” a fan tweeted with the trailer. “Let’s hope [it’s] because someone is following him or someone is fighting and not because Eddie or Steve dies because I can’t choose between those two.”

“Why is Dustin screaming whoever it is that’s in danger better not be Steve,” reads another tweet. Fans know the Duffer Brothers intended to kill Steve at the end of season 1. More recently, during Netflix’s Geeked Week, Ross Duffer said: “I’m pretty sure he was gonna die earlier. I mean, it’s been a while.” This has some fans thinking Steve will meet his end in the final episodes.

Dustin could be screaming for Eddie in the new trailer

Eddie Munson (Joseph Quinn) is a big concern for Stranger Things fans, too. “Yeah that scene with Dustin has me worried,” another Reddit user commented in the thread. “He sees either Eddie or Steve get killed :(.”

In the teaser, Dustin is seen back-to-back with the curly-haired leader of the Hellfire Club, wearing the same headband in the shot of him screaming. Fans are aware of Eddie’s epic guitar solo in the Upside Down, and the trailer has many of them theorizing he’s creating a distraction to save the others. Could Dustin be screaming at Eddie, sacrificing himself and playing the guitar to distract whatever is going to attack them?

“Gives me hope that Eddie survives,” another user pointed out, then added: “But could also see him saving Dustin as his heroic feat as it was foreshadowed earlier when he told Steve how much Dusty worships him.”

Either ‘Stranger Things 4’ Vol. II death will be painful for fans

Based on the online chatter, fans will have a hard time if either Eddie or Steve dies in the final chapters of Stranger Things. Both characters share a bond with Dustin — Steve even gets jealous of Dustin hanging out with Eddie and the Hellfire Club in Volume I.

In the end, they all come together in the battle against Vecna — a …read more

Reba McEntire | R. Diamond/WireImage Who is Reba McEntire’s son, Shelby Blackstock? In her autobiography, Reba: My Story, McEntire shared that she didn’t know if she would have taken another husband after her first divorce if it hadn’t been for wanting to have a baby. She decided during her first marriage that children were not […]

More than $200,000 worth of stolen Lululemon leggings was found in a La Habra apartment after California Highway Patrol officers served a search warrant last week, authorities said. Investigators with the CHP’s Organized Retail Crime Taskforce were alerted to three large boxes containing Lululemon merchandise, June 6, officials said. The boxes were being shipped from […]

Not everyone can say they’ve been compared to Meryl Streep, but Stranger Things cast member Sadie Sink recently received that honor from co-star Winona Ryder. In a recent interview, Ryder hailed the young actors in Netflix’s nostalgic horror-drama hit. But she had special praise for a few, including 20-year-old Sink. Winona Ryder compares Sadie Sink […]