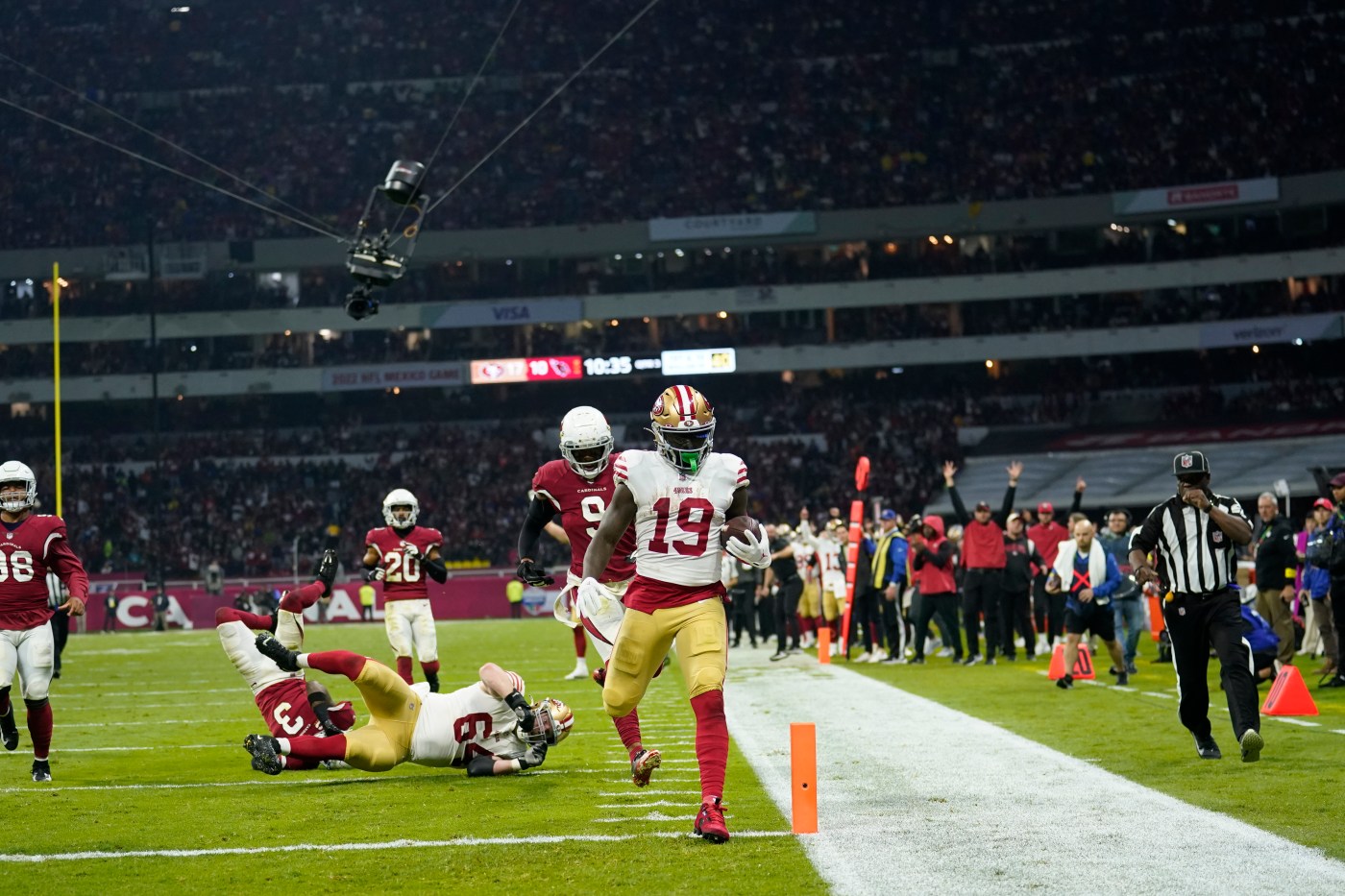 SANTA CLARA – Deebo Samuel had a career-high, 39-yard touchdown run Monday night, and he had more than a little help from his friends.

“It was a cool play,” coach Kyle Shanahan said.

It was a play that illustrates just how in unison the 49ers’ blocking can be – and has been as they’ve surged to a 6-4 record and share of first place amid a three-game win streak.

“That’s what we do,” Samuel said of the blocking he received on that third-quarter touchdown, which put the 49ers ahead 24-10 in an eventual 38-10 win over the Arizona Cardinals.

Let’s break it down and explain why it, especially the blocking, was so impressive:

After Jimmy Garoppolo uncharacteristically passed 21 times in the first half (against the 49ers’ seven runs), they opened the second half with a ground assault. After halftime, the 49ers called a run for the sixth straight snap, and so began Samuel’s touchdown run.

Jimmy Garoppolo faked a handoff to Elijah Mitchell, who just had three consecutive runs, and then Samuel dashed into the backfield from the formation’s right side.

Samuel took Garoppolo’s pitch on the midfield logo and raced left past George Kittle’s backfield block to open a lane.

Deebo Samuel was expected to gain 22 rush yards when he received the toss on his 39-yard TD run.

Samuel had an 86.8% chance of gaining a first down thanks to four blockers for two defenders on the left side of the field.#SFvsAZ | Powered by @awscloud pic.twitter.com/Eor7z4d1XB

Tight end Tyler Kroft led Samuel out of the backfield and toward the field’s left-side numbers. At the 35-yard line, Samuel found a lane.

Brandon Aiyuk’s three times sealed off linebacker Isaiah Williams. Kroft and Trent Williams escorted cornerback Marco Wilson out of the play and to the sideline.

Samuel’s favorite block? “BA’s,” Samuel replied. “That boy was lit. I made the cut off his block.”

Said Aiyuk: “We were faking that way, he’s coming back around. (Isaiah Williams) didn’t really see me so I’m trying to get in his way, so when the ball comes back this way, he turns into me and I get in front of him. He felt me a little and went up the field. It then was harder to seal him off, so it turned into a real, actual block.”

Meanwhile, Mike McGlinchey, the 49ers’ right tackle, traveled across the field and kept cornerback Antonio Hamilton from entering the fray at the 25-yard line.

“How hard the guys were working on the back side allowed us to finish it,” Shanahan said.

As Samuel cut up field, 10 yards ahead of him was Brendel, who took over this season as the 49ers’ nondescript center.

When Samuel breached the red zone at the 20, Brendel was going toe-to-toe with safety Budda Baker at the 15-yard line, then the 10, and finally pancaking him at the 6-yard line as Samuel raced past them.

“I thought they were going to get him for holding, …read more

‘RHOSLC’: Lisa Barlow Claims Castmates Invited Someone They Thought She Had an Affair With to Season 2 Event

The Real Housewives of Salt Lake City star Lisa Barlow had an infamous hot mic moment last season that former close friend Meredith Marks isn’t over yet. Their husbands later talked about the situation but didn’t come to a resolution as the blame game continued. However, Lisa claimed Meredith knew about Whitney Rose, apparently inviting someone […]

Orlando Magic guard Markelle Fultz could make his season debut vs. the Philadelphia 76ers on Sunday at Amway Center. Fultz was upgraded to questionable on the Saturday injury report after being sidelined for the season’s start, missing the first 19 games because of a fractured left big toe. The Magic enter 5-14 after Friday’s 107-99 […]

Brittney Griner’s plight is at the forefront with the Chicago Bulls in Phoenix: ‘I can only imagine the things that she’s going through’

With every step through the Footprint Center, it’s impossible to escape images of Brittney Griner. Griner is everywhere — her name emblazoned on the side of the arena and on the court where she played all nine years of her WNBA career for the Phoenix Mercury, her face decorating shirts and hoodies worn by players […]