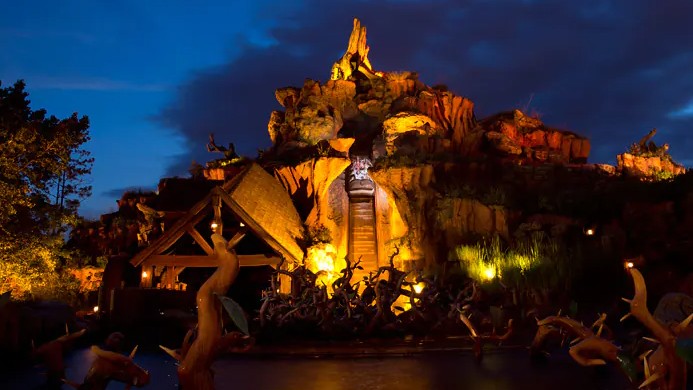 Diehard Disney fans are selling water scooped from the flume of Splash Mountain on the last day of operations at Walt Disney World for $50 dollars an ounce like it’s holy water blessed by the Pope at the Vatican.

Dozens of listings have popped up on eBay for “Splash Mountain Water” since the Magic Kingdom log ride closed on Sunday, Jan. 22 for a yearlong transformation of the attraction into Tiana’s Bayou Adventure.

Splash Mountain water from the Magic Kingdom is listed for $1 to $1,000 on the online auction website in a variety of containers ranging from Mason jars and Thermos bottles to Ziploc bags and water candles.

One eBay seller posted a joke listing for $25,000 for “tap water from my sink” to poke fun at fellow Disney fanatics and highlight the emotional connection to the log ride that opened in 1989 at the Florida theme park.

“This is obviously just for fun and to make fun of the people who are really selling water from a ride,” the eBay seller wrote. “I’m a Disney fan, but come on people. Has the world gotten so doomed that people would buy water from a ride?”

Magic Kingdom visitors waited in record-setting lines that stretched for as long as 220 minutes on the last day for Splash Mountain.

Expect Disneyland visitors to scoop up water souvenirs and wait in equally long lines when Splash Mountain finally closes after a 34-year run.

Disneyland’s version of Splash Mountain will also undergo a Princess Tiana makeover — but the Anaheim theme park has not yet announced a closing date for the attraction. Tiana’s Bayou Adventure will open in 2024 at Disney World and Disneyland.

The reimagining of the Splash Mountain rides will remove thematic elements related to “Song of the South” — the controversial 1940s live action/animated film criticized for perpetuating racist stereotypes that has been disowned by Disney.

The twin Tiana’s Bayou Adventure rides will tell an extension of the “Princess and the Frog” story that picks up after the final kiss between Princess Tiana and Prince Naveen. The new backstory for Splash Mountain will follow Tiana and Louis the trumpet-playing alligator as they prepare for their first Mardi Gras performance.

You’re waiting longer to get on Disneyland rides since Genie+ was introduced, data shows

Pam Grier Said It Was Obvious John Lennon Was ‘Lonely’

In 1974, actor Pam Grier was with John Lennon for one of the most notorious nights of his “lost weekend” period. While attending a comedy show in Los Angeles, Lennon began heckling the Smothers Brothers, leading to him attempting to punch their manager and getting thrown out of the club. Lennon was not at his […]

Daniel Radcliffe | Taylor Hill/FilmMagic Radcliffe has typically tried to be very conscious and careful of his Hollywood earnings. It would be easy for The Lost City star to indulge in his riches. Daniel Radcliffe has made a nice fortune off of the Harry Potter franchise. And although he’s usually not into making too many […]

‘The Blacklist’ Canceled at NBC, See the Season 10 Trailer