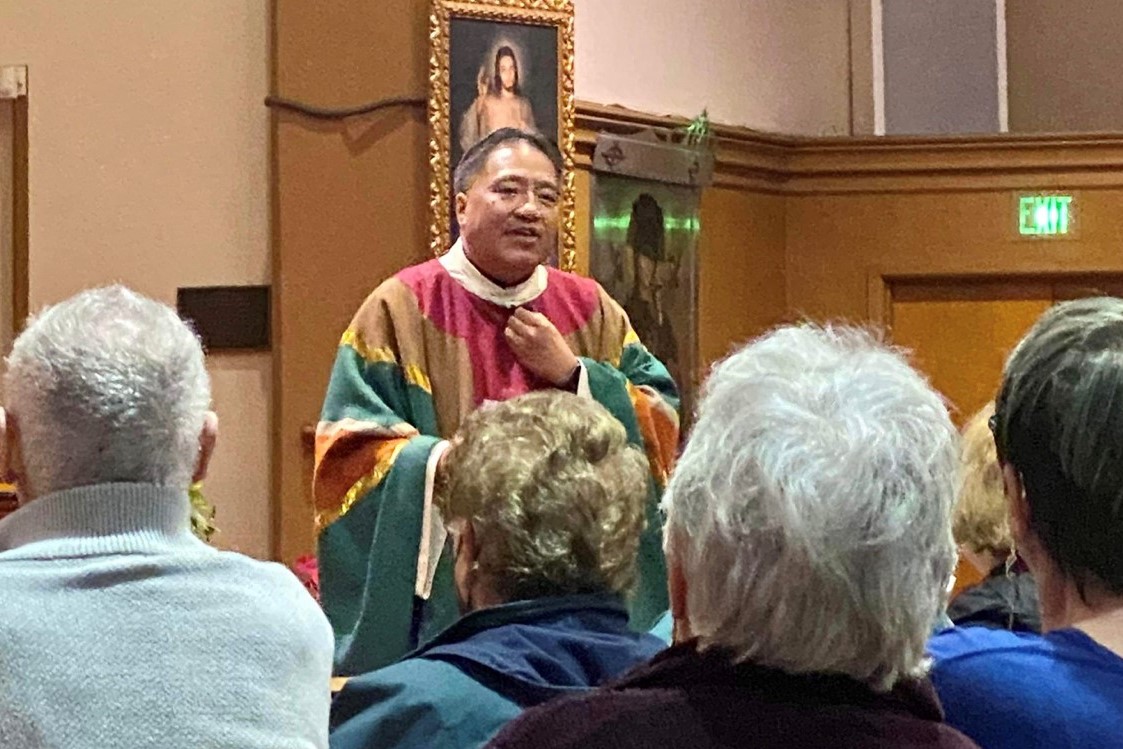 Congratulations (I think) to Father Jayson Landeza, who was installed Jan. 14 as the new priest at Divine Mercy Parish in East Oakland, an amalgamation of two longtime churches, St. Lawrence O’Toole on MacArthur Boulevard and St. Paschal Baylon’s, across the street from the Oakland Zoo.

I say, “I think” because his friends and parishioners, who love him, have been begging him not to spread himself too thin. He’s also the priest at St. Benedict’s on 82nd Avenue and a chaplain with the Oakland and San Leandro police departments; the fire departments for the cities of Oakland, Piedmont, Berkeley and Alameda; the Alameda County Sheriff’s Department; BART; the San Francisco offices of the FBI and Secret Service; and the U.S. Alcohol, Tobacco, Firearms and Explosives Department’s field division for Northern California and Nevada (Whew! I’m exhausted just writing this).

He was there at the Ghost Ship fire in 2016 that claimed the lives of 36 people, comforting their families and the first responders who were in a state of shock, and at the massacre in 2009 when four Oakland police officers — Daniel Sakai, Ervin Romans, John Hege and Mark Donakin — were gunned down in cold blood.

And, of course, he’s always there to minister to his own flock, no matter what time, day or night. He’s the guy you call at 3 a.m when your mother is sick or your kid is in trouble.

“The gift you bring to these situations is compassionate listening and being truly present,” he explains. “You’re not trying to take away the pain or talk them out of where they are at the moment. If somebody asks me for prayer or a glass of water or a bite to eat or a blanket, I make sure they get them. I don’t impose my own agenda on them.

“If they want to scream, let them scream. Never make it about yourself. It’s not about my own comfort level. I’m not a therapist, but I might help facilitate that, to help them feel whatever they’re feeling.”

So why does he do it?

“Because when I knelt before Bishop John Cummins at the old St. Francis de Sales Cathedral on October 30, 1987, to be ordained, he asked me, ‘Do you promise respect and obedience to me and my successors?’ I said, ‘yes.’ No crossed fingers. So when Bishop Barber asked me take on this parish, I said, ‘Of course.’ ”

But healing other people’s pain is a traumatic experience in itself, and Jayson is wise enough to know he can’t do it without help.

“I have a therapist who has a real specialty in trauma, so I process things with him. I’ve been doing that with him ever since our four guys died in 2009. I knew I needed to go into therapy after that.”

It’s hard to believe he has any spare time; but when he does, he loves to listen to jazz at Yoshi’s, eat at the Wood Tavern on College Avenue (“Oh my God! Great pork chops!”) and visit Hawaii whenever he can. …read more

It took only 23 days into 2023 to make this California’s deadliest month of mass shootings in at least a decade. And it seems like everybody is feeling it. Six dead in the San Joaquin Valley town of Goshen. Five days later, 11 gunned down in the LA suburb of Monterey Park. Two days after […]

The Jets have settled on the coach they hope can get their offense to take flight. Gang Green has hired former Denver Broncos head coach Nathaniel Hackett as offensive coordinator. The Jets have scheduled a noon press conference Thursday with head coach Robert Saleh. The team ‘parted ways’ with Mike LaFleur after the Jets lost […]

Is Michael Leaving ‘The Young and the Restless’?