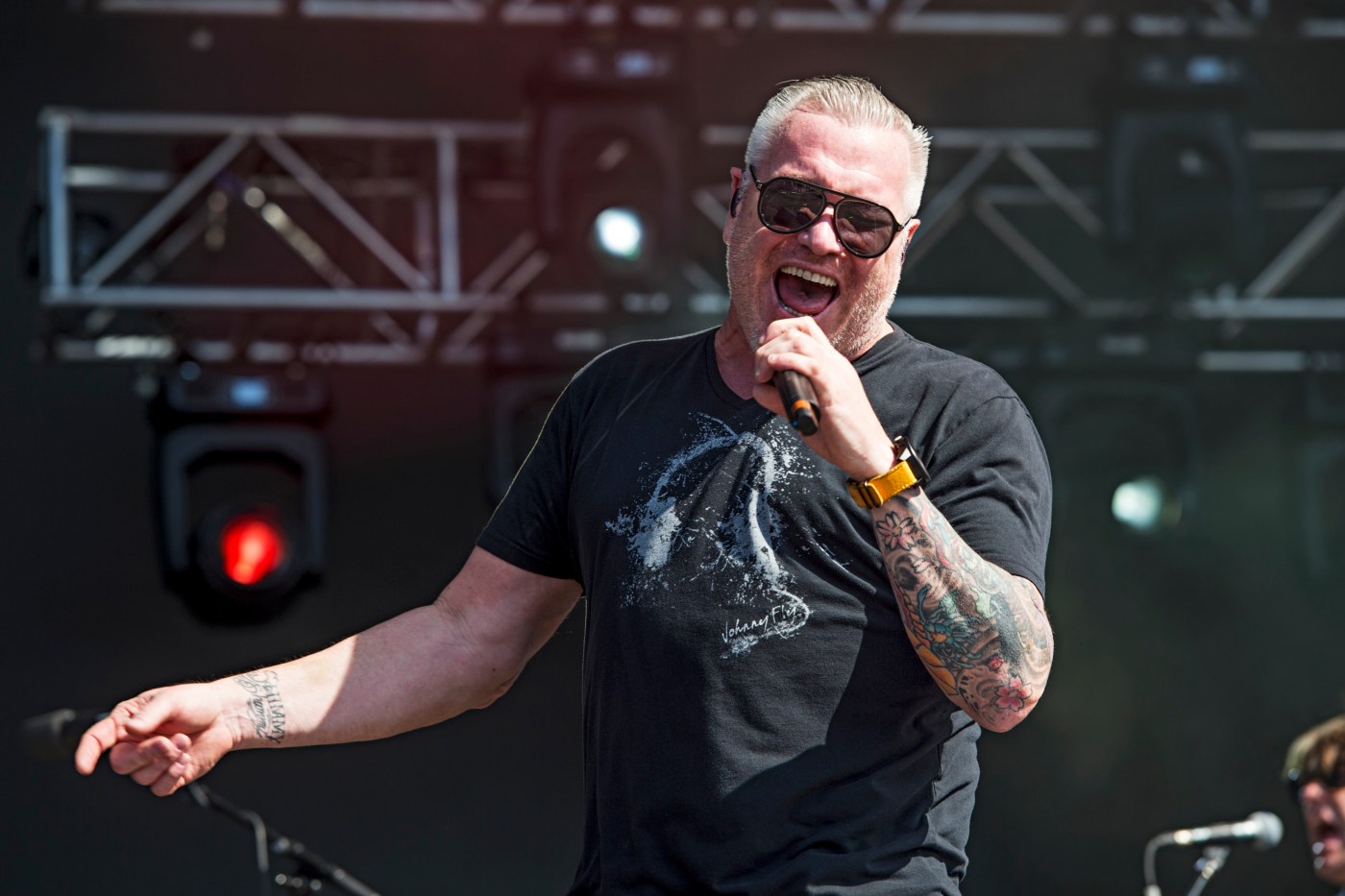 The news comes hot on the heels of video footage having surfaced that shows the 54-year-old singer engaging in incredibly bizarre and downright despicable behavior at a recent show by Smash Mouth — one of the most popular bands to ever come out of San Jose.

One concert goer recorded part of the performance, which took place on Oct. 9 at the Big Sip festival in upstate New York, and posted the footage on Tik Tok. It’s since been viewed over 1 1/2 million times, causing Harwell and the band to trend on social media for all the wrong reasons.

“When I say that this is the most chaotic show I have ever seen in my life … I have no words,” says the concert attendee at the start of the video.

In the video, Harwell is shown slurring his words and swearing at the crowd. He also issues a harsh threat to someone, saying “I’ll (expletive) kill your whole family, I swear to God.”

He also makes a gesture with with his arm, which the Los Angeles Times described as “what appeared to be a Nazi salute to the crowd.”

Now, it appears that performance will be the last one Harwell will ever do with the band known for such big hits as “Walkin’ on the Sun,” “All Star” and a cover of “I’m a Believer.”

“Steve has been dealing with long-term medical issues over the last eight years and during his last performance at the Big Sip stage, he suffered numerous symptoms directly linked with his current medical situation,” a rep for Harwell told the New York Post. “As of today, Steve will be retiring from Smash Mouth to focus on his physical and mental health.”

New music: 5 cool albums to check out in October

Metallica, Black Sabbath fans will want to check these out

Harwell also made a statement, showing a goodly amount of gratitude as he said goodbye to life in the band.

“Ever since I was a kid, I dreamed of being a rock star, performing in front of sold-out arenas and have been so fortunate to live out that dream,” Harwell said in a statement, according to the New York Post. “To my bandmates, it’s been an honor performing with you all these years and I can’t think of anyone …read more

Sharks’ defenseman to have surgery, could miss up to two months

SAN JOSE — Defenseman Nikolai Knyzhov will have surgery next week to try and correct an unspecified lower-body injury and could miss the next two months, Sharks coach Bob Boughner said Sunday. Knyzhov, the Sharks’ top rookie last season, had seen a specialist earlier this week after his rehabilitation wasn’t having the desired amount of […]

‘Gilligan’s Island’: The Cannibalistic Twist 1 Director Almost Made Into a Movie

L-R (back row to front row): Jim Backus, Natalie Schafer, Tina Louise, Alan Hale Jr., Dawn Wells, Russell Johnson, and Bob Denver | CBS Photo Archive/Getty Images The Gilligan’s Island sitcom follows a group of castaways who are stranded on a desert island. It was originally intended to be a three-hour tour on CBS. However, […]

When Did Vanessa Hudgens and Josh Hutcherson Date?

There are some celebrity relationships that capture the public’s attention in a big way, with tabloids printing endless photos and speculation about the relationships in question. High-profile couples of the past like Britney Spears and Justin Timberlake and Hilary Duff and Aaron Carter made headlines on a daily basis, while other young couples seemed to […]