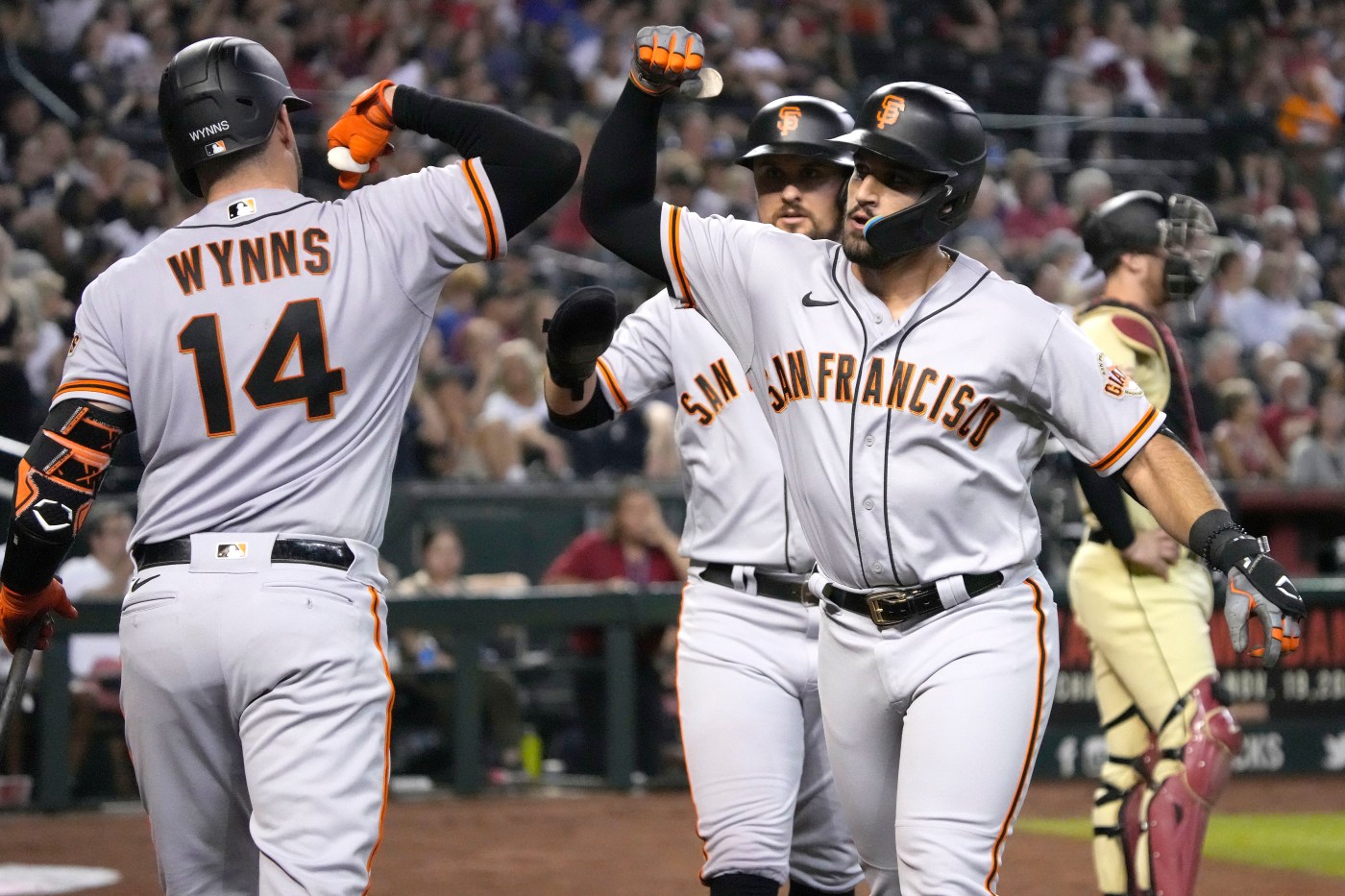 The Giants got an off night from Carlos Rodón Friday against the Diamondbacks and blew an early lead but reclaimed it for good in the top of the ninth to pull out a win, 6-5, running their streak to five in a row and pulling them closer to .500 than they have been since the first week of this month.

J.D. Davis made Arizona pay for a defensive miscue, doubling home the go-ahead run with two outs, after third baseman Sergio Alcantara bungled the surefire third out on a ground ball as Mike Yastrzemski hustled into second base.

Here are some takeaways.

Home run hitting: The Giants got a trio of home runs from Brandon Crawford, Austin Wynns and David Villar — their 18th time launching three in a game this season but only the fourth time since the All-Star break.

After leading the National League with 241 bombs last year, their three shots Friday increased their total this season to 168, still sixth in the NL but well off last year’s pace.

After a dazzling display of defense in Colorado, Crawford got the Giants on the board with a solo shot in the second inning. Wynns made it 2-0 with a 394-footer to lead off the third. A two-run shot from Villar in the fourth reclaimed the lead for the first time, 4-2, after Stone Garrett tied the game with his own two-run shot off Rodón in the bottom of the third.

Villar, who’s combined for 34 across all levels this year, is closing in on his own his own personal accolade. His next home run will tie him with Buster Posey in 2010 for the most by a Giants rookie in September. Since being recalled at the start of the month, Villar is batting .254 with six home runs, a team-leading .865 OPS this month.

K race: Rodón didn’t factor into the decision but did reclaim the National League lead in strikeouts. He was clearly displeased with his outing when manager Gabe Kapler came to get him with two outs in the fifth inning, after laboring through 93 pitches to that point.

Rodón struck out seven — raising his season total to 227, past Milwaukee’s Corbin Burnes (224), whose next start is Saturday — but appeared to be bothered by the same blister/cracked nail that pushed his start back from Tuesday.

He walked three, all with two outs, including one to Ketel Marte in the third that came back to bite him. The next batter, Garrett, sent a letter-high fastball into the left-field seats. Reliever Yunior Marte allowed both runners he inherited to score, leaving four earned runs charged to Rodón, increasing his ERA to 2.98.

New faces: In the same stadium where his career went sideways, Shelby Miller got his latest fresh start, making an impressive first impression with the Giants, striking out …read more

LOS ANGELES (AP) — A father who went looking for a teenager who hadn’t come home from school found the girl in distress in the school’s courtyard — and her friend dying in the restroom. It is thought that the two girls, both 15 years old, overdosed on pills laced with fentanyl. The man called […]

Queen Elizabeth’s Funeral: 8 of the Most Poignant Photos of the Royal Family Saying Goodbye to the Monarch

Prince William and Prince Harry | David Davies – WPA Pool/Getty Images Royals followed the State Gun Carriage carrying Queen Elizabeth’s coffin as it made its way to the Wellington Arch. The Prince of Wales and his younger brother, Prince Harry, walked next to each other. The 45-minute procession was followed by one final procession […]