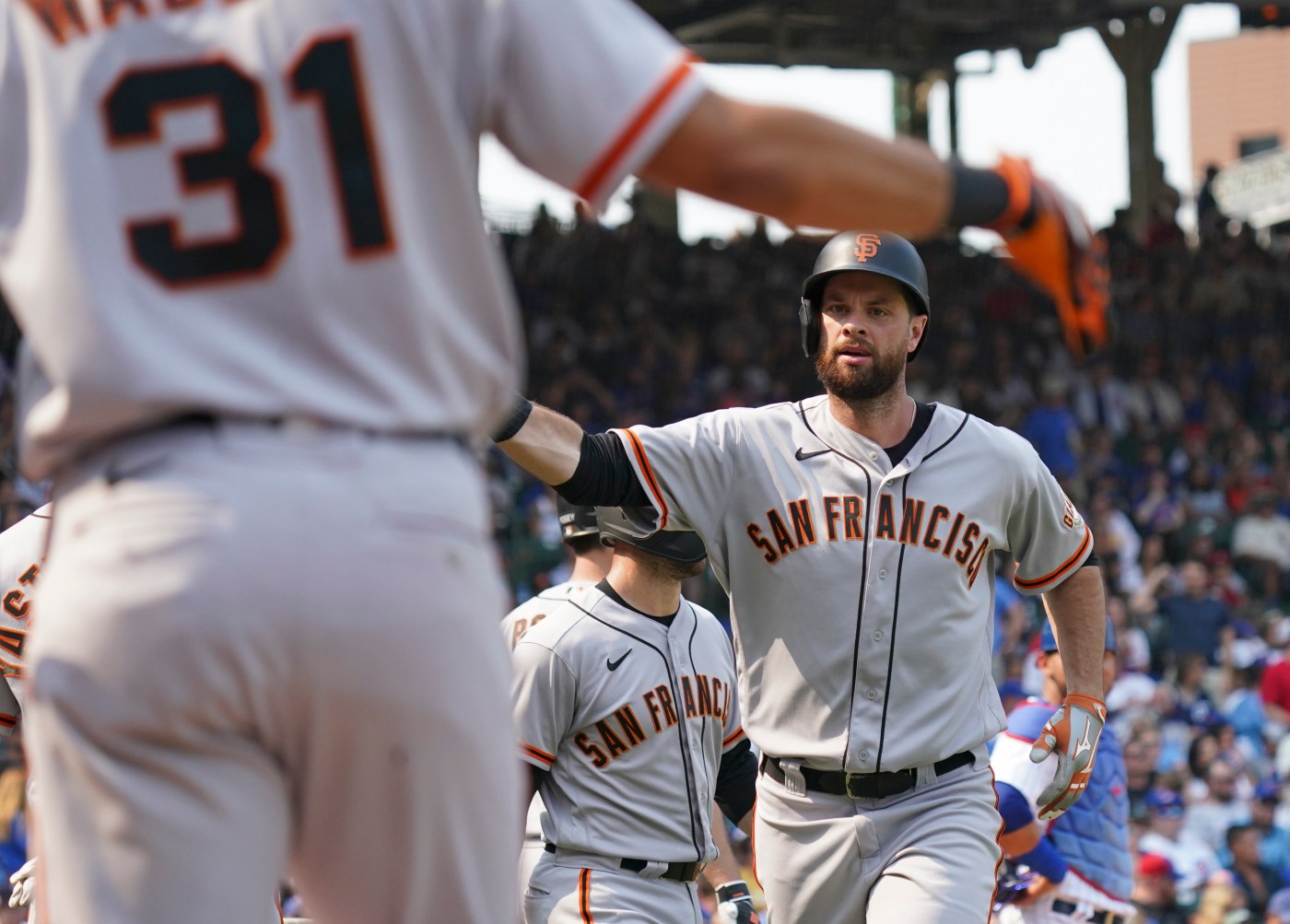 CHICAGO — With an offense that’s close to full strength and several veteran hitters putting the finishing touches on the best season of their professional careers, the Giants have one of the deepest lineups in the majors.

La Stella’s stat line from the 2021 season suggests he should be hitting near the bottom of the Giants’ lineup, but prior to Saturday’s game, Kapler insisted the club believes he’ll soon hit his stride at the plate.

In the Giants’ 15-4 blowout win at Wrigley Field over the Cubs, La Stella took a big step forward as he led another well-rounded effort with an early two-run single and a towering three-run home run to finish with a career-high five RBIs and put an exclamation point on the team’s sixth straight win.

After securing their seventh five-game win streak of the season on Friday, the Giants matched their season-high for consecutive victories set August 7-13 and will have a chance to close out a perfect 6-0 road trip behind their emerging ace, Logan Webb, on Sunday.

The win dropped the Giants’ magic number to clinch a playoff spot to four, meaning San Francisco will have a chance to lock up a postseason berth near the beginning of the club’s next homestand.

The Giants fell into an early 1-0 hole, but rallied for five runs in the second to knock out Cubs starter Zach Davies as La Stella delivered a go-ahead two-strike, two-out, two-run single with the bases loaded. His line drive to right center field brought the team’s hottest hitter, Brandon Belt, to the plate.

Belt yanked a long flyball on the wrong side of the right field foul pole, but straightened things out with his next swing by launching a 406-foot shot into the right center field for a three-run homer.

With the Giants ahead 6-1 in the third, the Cubs cut into their deficit after a defensive miscue from center fielder Mike Yastrzemski allowed Ian Happ to race around the bases for a triple. Happ dropped his head in frustration after sending what appeared to be a routine flyball to center field, but the whipping winds of Wrigley Field carried it all the way to the warning track and over Yastrzemski’s head.

An infield single from Willson Contreras pulled the Cubs within three runs, but Yastrzemski helped make up for the mistake during a six-run sixth inning that broke the game wide open. Following a bases loaded walk from Evan Longoria, Yastrzemski drilled a two-run single into right center before La Stella sent his fourth home run of the year off the scoreboard beyond the right field wall.

La Stella has played more than half of his career games for the Cubs and was part of Chicago’s 2016 World Series championship club, but his return to Wrigley Field clearly didn’t have the same type of fanfare as Giants teammate Kris Bryant.

The Rolling Stones’ Mick Jagger has co-written some of the most acclaimed songs in history. Despite this, his longtime songwriting partner, Keith Richards, hates some of his solo material. He gave up listening to one of Jagger’s solo albums three songs in. During an interview, Richards revealed what he thinks of Jagger’s solo work as […]

After the success of his AppleTV+’s comedy musical series Schmigadoon, Keegan-Michael Key is said to have signed on for Wonka, Deadline reported. The movie is the origin story for Roald Dahl’s popular character Willy Wonka, who later went on to establish the world’s most famous chocolate factory. The Emmy-winning actor is the second announcement as […]

Garrison Tailors luxury menswear | Ollie Millington/Redferns via Getty Images Even celebrities like David Beckham have followed the show’s trends. Costume designer Stephanie Collie explained why the look has resonated with fans, and how to dress like a Peaky Blinder. The ‘Peaky Blinders’ look is a popular trend Surprisingly, the Peaky Blinders style has become […]