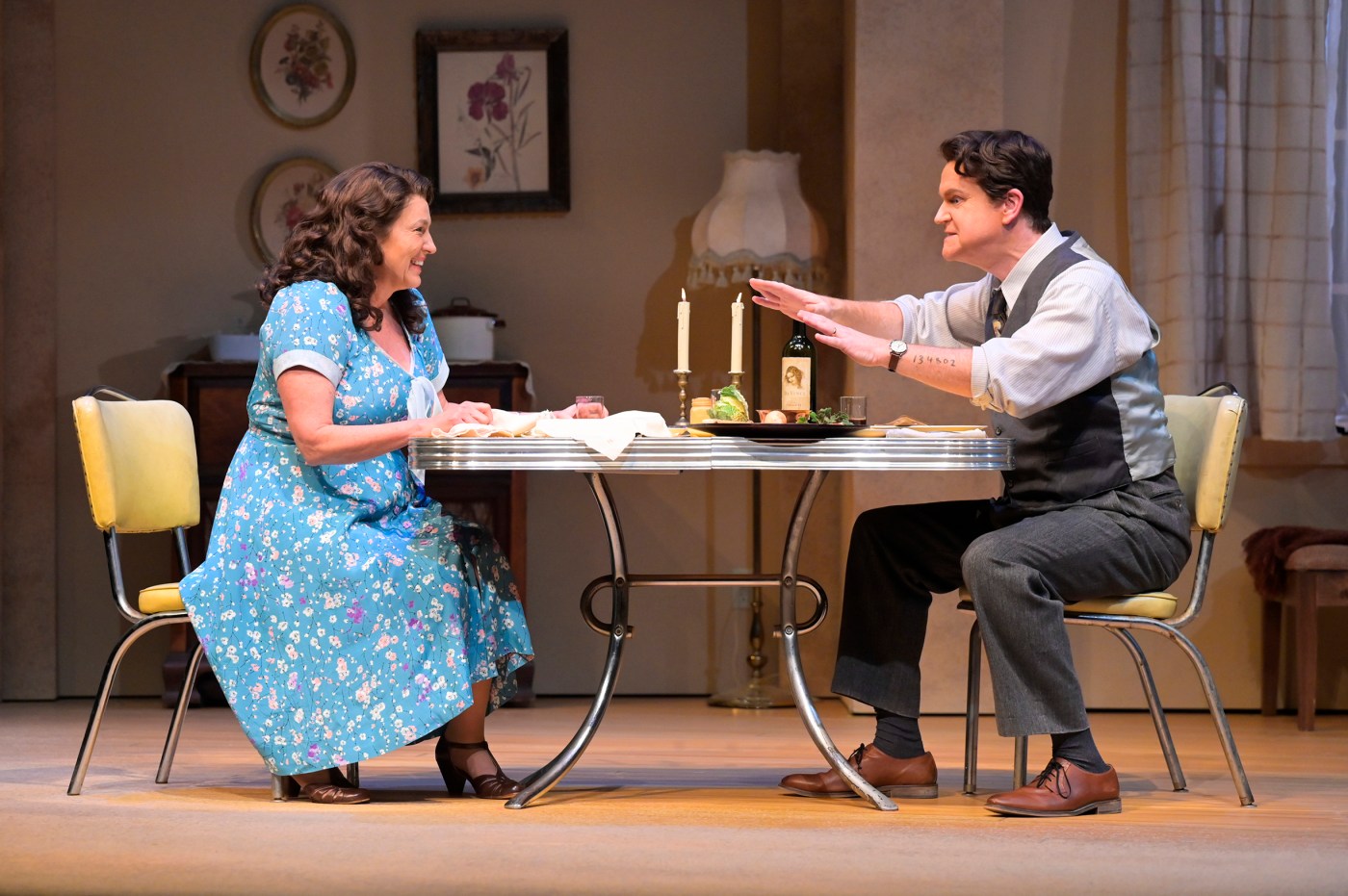 There is desperation lurking within Paola’s eyes, a fountain of scorching tears teetering on the brink of eruption as she embraces Davide, who clutches her body and her soul even more profoundly, in return. As he matches her piercing gaze with one of his own, she makes a demand of him.

The palpable reminder of death adorns the arm he caresses Paola with as she makes her plea. The cruel demarcation that signals the inhumane existence of his Auschwitz imprisonment 10 years prior comes in the form of his prisoner number, seared into his flesh.

Moments like these smolder in TheatreWorks Silicon Valley’s production of “In Every Generation,” the story of a Jewish family in Los Angeles and its legacy spanning centuries, veering into alarming foreshadowing of the future. This dipping and darting of the play’s second scene, involving masterful turns from Luisa Sermol and Michael Champlin, is one of four that makes up the play in its entirety.

This scene carries the greatest puissance in the piece, a commanding example of the succulent skill of its performers and writing that transforms the space. Yet the overall script by Ali Viterbi, with an urgency exploited in the form of addressing many topics in a relatively tight timeframe, does not always lean on its better instincts, diluting the proceedings in too many moments.

Much of the story follows a narrative that exudes a controlled, scattershot vibe with infinite transitions, conversations bouncing everywhere to mostly great effect. The issues lay blame at the feet of every generation within the Levi-Katz family, a unit that finds conflicts aplenty as members reckon with their Jewish faith.

As quarrels explode and mini-grenades are launched in every direction on Nina Ball’s symmetrically simple scenic design, many historical facts are shared via supertitles as the family celebrates Seder, the gathering and feasting on the first days of Passover. The facts serve as a reminder of just how fraught the existence of Jewish people continues to be.

The family is adroit at feasting with traditional delicacies and rituals, accompanied by the fantastic sounds of Klezmer music as they challenge each other’s complacency.

Yael (Olivia Nicole Hoffman) uses her Ivy League education to remind the family that it’s not the Jewish people who are oppressed in modern American society. Dev (Sarah Lo) confides in Yael her plans to attend rabbinical school despite a lineage rooted not in biology, but adoption from a Chinese orphanage.

Valeria (Cindy Goldfield) is rooted in personal and generational trauma despite a thriving career as a distinguished UCLA professor. Much of her inner-torture comes from feeling as though she isn’t “blooming.” She freely expresses the exhaustion of these Jewish holidays, which comes with plenty of consternation and stress from her family.

Director Michael Barakiva keeps the action tight, despite a general staticism to the staging, which is understandable. The action of the play is not rooted in movement, but in ideas and explosive dialogue, even though the pacing can sometimes be hard to follow. Seder is the backdrop that informs everything …read more

‘And Just Like That…’: 2 Reasons Mr. Big Would Be Totally Cool With Carrie and Aidan Getting Back Together, and 1 Reason He Wouldn’t

Chris Noth as Mr. Big | Craig Blankenhorn / HBO While the men certainly battled in season 4 of Sex and the City, they came out of that with mutual respect. At the very least, they managed to get along enough to sit down at a table together and discuss Mr. Big’s romance issues. If Mr. […]

By SUZAN FRASER (Associated Press) ANKARA, Turkey (AP) — A powerful 7.8 magnitude earthquake hit southern Turkey and northern Syria early Monday, toppling buildings and triggering a frantic search for survivors in the rubble in cities and towns across the area. At least 234 were killed and hundreds injured, and the toll was expected to […]