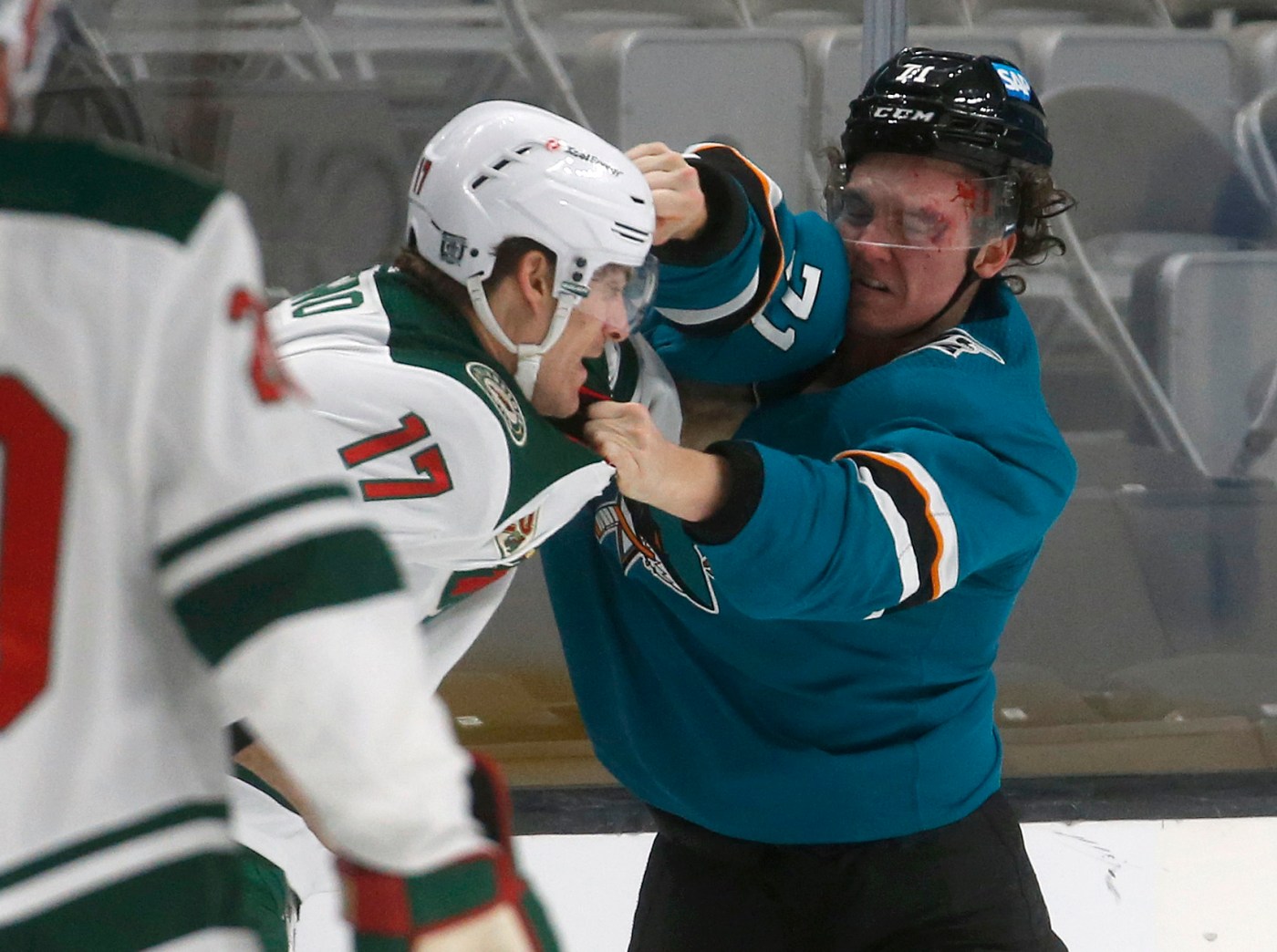 They were already impressed with his backstory. Two years ago as a 19-year-old, he played in three separate leagues in his native Russia, and showed enough promise to earn an entry-level contract from the Sharks in the summer of 2019.

Undrafted and somewhat unheralded going into training camp in December, Knyzhov came out of it with not only a roster spot, but a place in the Sharks’ opening night lineup. He has played in every game this season.

The respect level went up another notch Monday during an otherwise forgettable night for the Sharks, as the 6-foot-3, 215-pound Knyzhov had the temerity to fight the more seasoned Marcus Foligno late in the first period of what became a 6-2 loss to the Minnesota Wild.

Foligno hit on Knyzhov at the 8:22 mark of the first period, and that may have lit the match for what would transpire later as the two players dropped the gloves for what would turn out to be a one-sided fight.

Foligno fed Knyzhov with a barrage of right hands, and with Knyzhov cut, potentially from his visor, Foligno asked the linesman to step in and stop the fight.

“It’s a game and it was in the moment just, kind of a battle there down low,” Knyzhov said. “After the whistle, he came up to me and he’s like, ‘you want to go?’ So, you know, it just happened. A good way to get the monkey off my back. I’ll take it as an experience.”

Foligno the nicest guy to ever fill your face in pic.twitter.com/bdmDgGsaZQ

“You know, good on him. I give him a lot of credit,” Foligno said of Knyzhov. “I think there’s things you do when you’re young to answer the bell, and you have to do it and you gain a lot of respect from your teammates. So I’m sure he got that tonight.”

Earlier Monday, Marc-Edouard Vlasic gave Knyzhov kudos for his skating and puck handling ability, as he’s had to take on a larger role with Erik Karlsson and Radim Simek both out of the lineup.

“I enjoy playing with him,” Vlasic said of Knyzhov. “He can skate, he can make plays, he’s good with the puck. If he jumps up in the rush, he can always get back because he moves so quickly. It’s been a lot of fun.”

When the fight was over, Knyzhov 22, earned enthusiastic stick taps from his teammates for what was the Sharks’ first fighting major this season. Knyzhov likely won’t fight too many more times this season, but teammates know there’s no doubting his commitment.

”He’s been unbelievable this season, in all aspects of the game,” Sharks captain Logan Couture said. “Just a cool story, too. A kid that was never given anything, never drafted and worked his ass off to get to where he is. Really wants to compete and help our …read more

Buckingham Palace and Prince Philip’s youngest son sought to allay public concerns about Queen Elizabeth’s husband after the announcement Tuesday that the 99-year-old would remain hospitalized for a few more days for treatment of an unspecified infection. In a statement Tuesday, Buckingham Palace said that the Duke of Edinburgh is “comfortable and responding to treatment” […]

Miss Manners: How could I have paid for their meager meal without embarrassing them?

DEAR MISS MANNERS: There were two people in line in front of me in the grocery store, an adolescent boy and a man I assume was his father. They were pooling change to buy a can of soup. One can of soup. I desperately wanted to give them some money to help them out, but […]

Christina Leung was riding Muni last year near San Francisco’s Chinatown when she heard the bus driver talking loudly with a White passenger. A group of Asian American residents had just boarded, and the conductor was complaining about the behavior of “Chinese” customers, thinking they couldn’t understand her, said Leung, a self-described senior citizen who […]