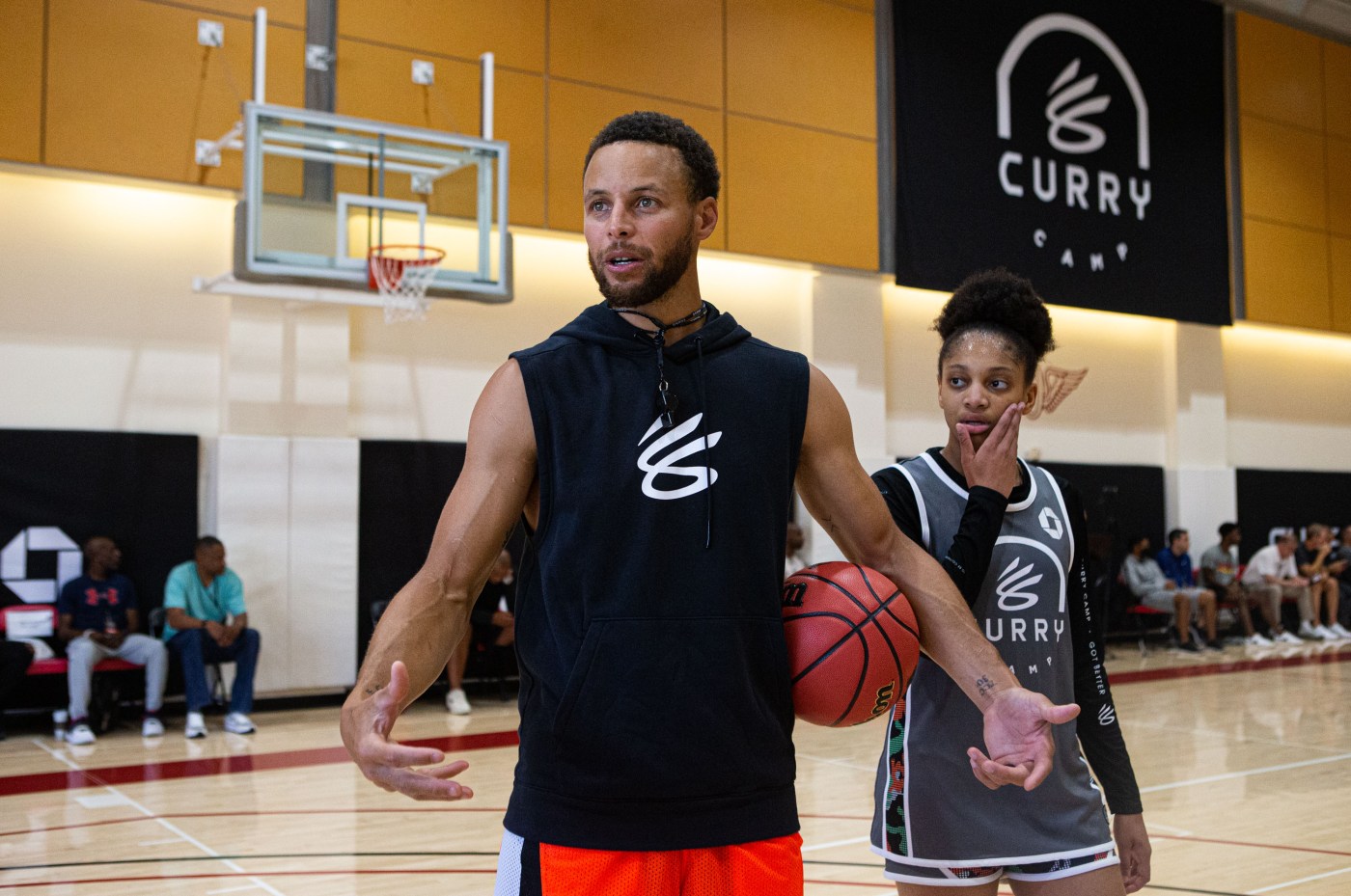 Running wild is one of his signatures moves on the basketball court and a tradition of his off-seasons.

Since parading down Market Street to celebrate his fourth NBA title with the Warriors three months ago, Curry has golfed in Tahoe, hosted the ESPYs, treated hundreds of kids to an A’s game in Oakland and celebrated his three children’s birthdays and his 11th wedding anniversary with his wife, Ayesha, in France.

Now he’s hosting 26 elite high school basketball players — 13 girls and 13 boys — at his Curry Camp, held at the San Francisco Olympic Club. A tradition that took a two-year break amid the pandemic, but resumed this year with some of the country’s top young talents in house, including identical twin phenoms Amen and Ausar Thompson and Division 1 recruits like UConn commit Ashlynn Shade.

At Friday’s practices, Curry warmed up, ran drills with his campers and even refereed scrimmages between the boys and girls sides.

Isn’t he even little tired?

“Not at all,” Curry said. “Running on championship adrenaline.”

Of course, Curry brought along a little help to the intimate event. Former teammate and current free agent Kent Bazemore and his personal trainer Brandon Payne are coaching alongside him along with a team of people from Curry’s camp.

“I Love to give that back knowing I have the opportunity to do so,” Curry said. “And I love to be out there engaged with the kids. I really have fun doing it.”

And Friday’s special event was a full coaching session with Bob McKillop, Curry’s coach at Davidson College just recently retired after 33 years. He didn’t go easy on the kids, unafraid to get up in the young players’ personal space.

“You’re on Curry’s team, you put that jersey on, you make sure you handle what that represents,” McKillop said in a fiery pre-practice speech. “And what does that represent? Does that represent shooting 3s? He shot 68% on layups this year, 98% from the foul line this year. He does everything shooting wise. But that’s with the ball in his hands. He runs 2.5 miles per game. Because he’s cutting, helping, attacking space. You ever seen him screen? He’s one of the best screeners in the league. He’s a complete player.

McKillop’s voice rang out loud through the gym as he ran the boys through movement-based drills. A more subdued, but hands-on Curry and Bazemore ran the same drills with the girls on the other side of the court.

“He’s actually tamed down,” Curry said. “I got him 15 years ago even more spry than that.”

Everything the campers work on at Curry Camp is based on Curry’s career path. His 6-foot-3 frame made him a physical underdog heading into the league, which meant he had …read more

Krugman: Passage of climate bill offers hope for the world

They really did it. The Inflation Reduction Act, which is mainly a climate change bill with a side helping of health reform, passed the Senate on Sunday; by all accounts it will easily pass the House, so it’s about to become law. This is a very big deal. The act isn’t, by itself, enough to […]

MINNEAPOLIS — Alas, the 49ers’ defensive line depth can only go so deep. Defensive tackle Robert Nkemdiche’s three-week tenure with the 49ers is done, a day before they hold joint practices with the host Minnesota Vikings. Nkemdiche had been a very active and boisterous addition to the talent-rich defensive line since getting signed the first […]

It doesn’t feel too long ago that the Warriors were basking in the California sun with the Larry O’Brien Championship Trophy as they paraded down Market Street for another celebratory parade. But after a few months off to recuperate and relax, the NBA season is quickly approaching and a tell-tale sign came Wednesday when the […]