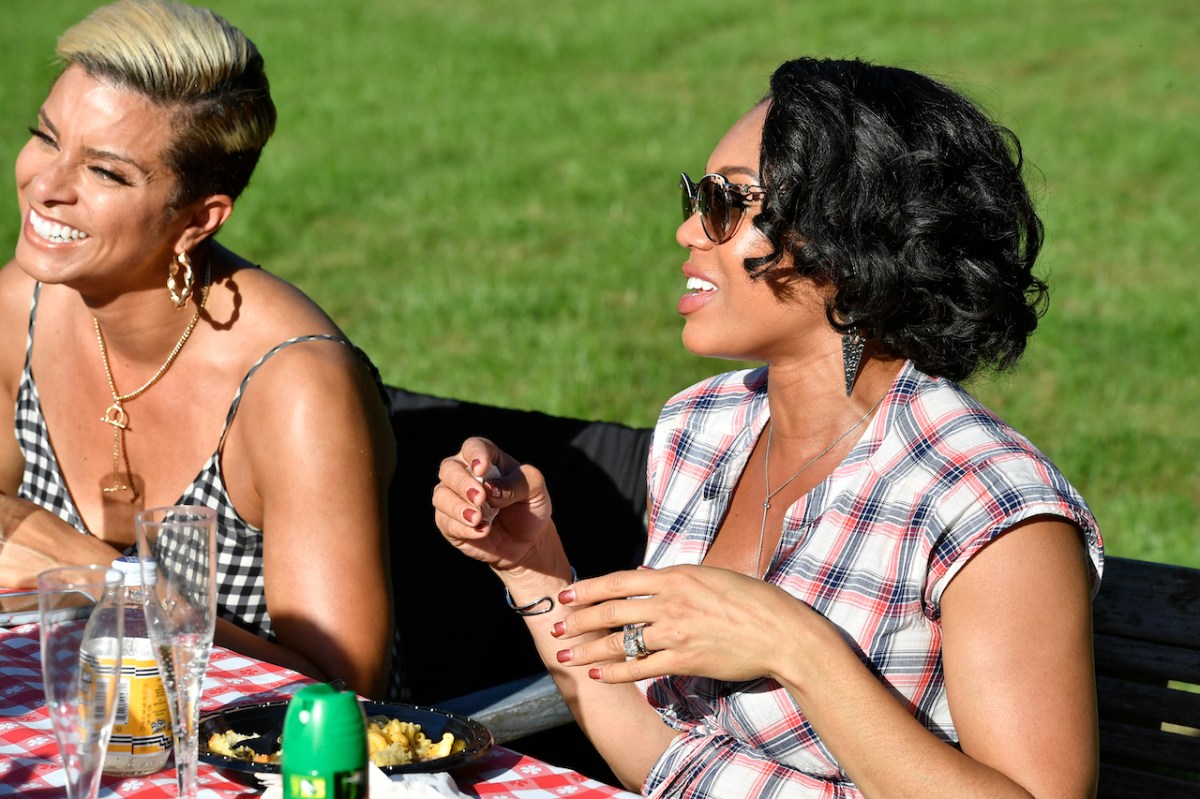 Viewers of The Real Housewives of Potomac are still discussing Mia Thornton throwing a drink in Wendy Osefo’s face. Many have spoken out against Thornton, noting that her actions were unwarranted. Now, former co-star, Monique Samuels, is sharing her thoughts. She gives kudos to Osefo for how she handed being assaulted. Samuels also says she’s not surprised that Thornton came under attack.

While on a girl’s trip to Miami celebrating Karen Huger’s birthday, Season 6 newbie Thornton called up RHOA alum Peter Thomas and gave him a heads up of the guest list for their private dinner at his South Beach restaurant. Thomas informed her that he has “beef” with Osefo. He claims their relationship soured after conversations regarding a potential joint business stalled. Thornton decided to make herself part of the issue and confront Osefo about it.

Osefo is baffled by Thornton’s insistence on discussing her business relationship with Thomas. After arguing back and forth, Thornton is somehow triggered and aggressively throws a drink in Osefo’s face. Gizelle Bryant and Robyn Dixon sided with Thornton. Osefo never physically retaliated.

Samuels is no stranger to an argument escalating to a physical altercation. She infamously hit Candiace Dillard Bassett in the heat of a verbal debate while at a winery during Season 5. The moment was a build-up of the breakdown between the two ladies’ friendship, with instigation from other co-stars. Eventually, Samuels apologized, but she felt antagonized by Dillard Bassett.

Osefo famously scolded Samuels for her behavior. Now, Samuels says she’s proud of Osefo for not retaliating.  “I don’t know the entire story, but I applaud Wendy for not getting physical as I did after I was hit in the face with a glass,” she told The Neighbhorood Talk. “She had every reason to defend herself after being splashed in the face and then apparently hit with a purse, and she chose to use her words instead.

She added: “One thing Wendy said to me back then at Karen’s home was she would never get physical, she would use her words. Clearly, she lived up to that statement in this moment. I told her at the season 5 reunion she and her family would be next. The hate with some of those women is not for the camera. They’re real life miserable. One thing Wendy should understand is that it’s not about her actions or lack there of, she could have sat there quietly and they still would have found reason to ice her out.”

Thronton has apologized in several social media posts, but it’s not enough for fans. She’s been under intense scrutiny since the episode aired and seemingly cannot handle the backlash. In a post that …read more

Each Beatles album has several standout songs. Not only do fans have their favorites, but The Beatles had their own standouts from what they created. There are many great songs from Abbey Road, but Paul McCartney believes the album’s biggest hit is his favorite.  Paul McCartney says ‘Come Together’ is his favorite ‘Abbey Road’ song […]

SANTA CLARA — Nick Bosa got a hero’s welcome as he arrived at the 49ers’ sideline with 6:18 left in Sunday’s eventual win. Their first shutout in three years was intact, courtesy of his fourth-and-goal sack. Minutes earlier, Dre Greenlaw and Talanoa Hufanga were the 49ers’ defensive heroes, with Greenlaw recovering a fumble at the […]