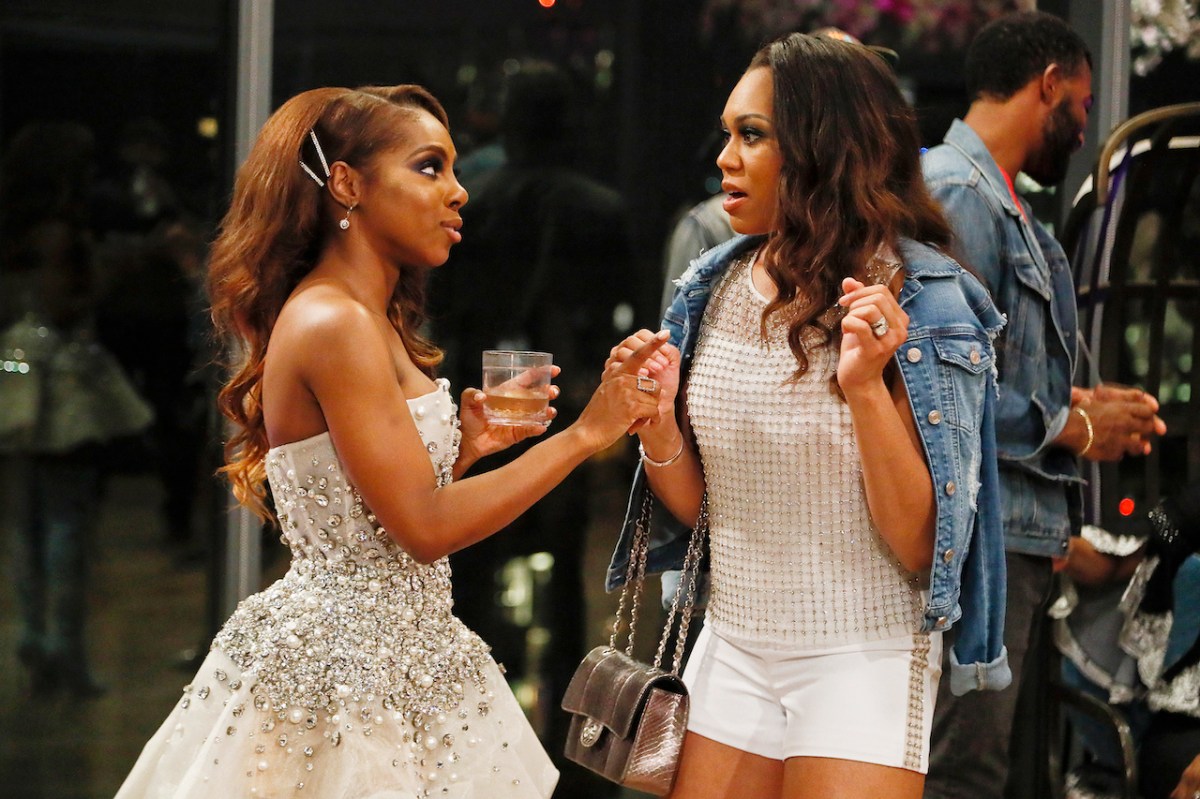 Fans of The Real Housewives of Potomac are still talking about Mia Thornton’s infamous drink toss in Wendy Osefo’s face. Many have compared the aftermath to that of Monique Samuels’ physical altercation with Candiace Dillard Bassett in Season 5. Samuels has since spoken out in praise of Osefo for handling the situation without retaliation. But Dillard Bassett is not here for Samuels’ relocation of events.

Samuels hit Dillard Bassett in the heat of a verbal debate during a cast trip to a winery. The moment escalated amid their co-stars’ interjections and their constant arguing throughout the season. Samuels apologized at the reunion taping but stood her ground in her belief that Dillard Bassett provoked her.

Osefo scolded Samuels for her part in the fight. Samuels says she’s happy with how Osefo handled her own incident with Thornton. “I don’t know the entire story, but I applaud Wendy for not getting physical as I did after I was hit in the face with a glass,” she told The Neighbhorood Talk. “She had every reason to defend herself after being splashed in the face and then apparently hit with a purse, and she chose to use her words instead.

She added: “One thing Wendy said to me back then at Karen’s home was she would never get physical, she would use her words. Clearly, she lived up to that statement in this moment. I told her at the season 5 reunion she and her family would be next,” said Monique. “The hate with some of those women is not for the camera. They’re real life miserable. One thing Wendy should understand is that it’s not about her actions or lack there of, she could have sat there quietly and they still would have found reason to ice her out.”

Dillard Bassett has always maintained Samuels skewed the fight in her favor by leaking false information to the blogs. Video footage from the fight also shows that Samuels made physical contact with Dillard Bassett first. The “Drive Back” singer is furious over Samuels’ recent claims that the fight started after she hit Samuels with a wine glass.

The unemployment line will really have you saying anything for access to a check or the prospect of one. We are STILL bored.

“This —- is still…NO ONE HIT YOU WITH A GLASS. LET THE LIE GO,” she wrote in a Tweet captured by Jay’s Reality Blog. She also threw shade at Samuels for speaking on the Thornton/Osefo drama when she’s no longer on the show.

(L-R) Alexis Bledel as Rory Gilmore and Lauren Graham as Lorelai Gilmore | The WB/Mitchell Haddad/Getty Images Lauren Graham portrayed Lorelai Gilmore Gilmore Girls debuted on television in 2000, becoming a flagship series for The WB before eventually moving to The CW. The series highlighted the lives of Lorelai and Rory Gilmore, a young single […]

Even with all the moving pieces, with Tyler Herro back and Max Strus now out, there remained a pair of constants Wednesday night for the Miami Heat — no lead is safe and almost every game is harrowing. This time it was a 21-point advantage early in the third period, and then another wild scramble […]