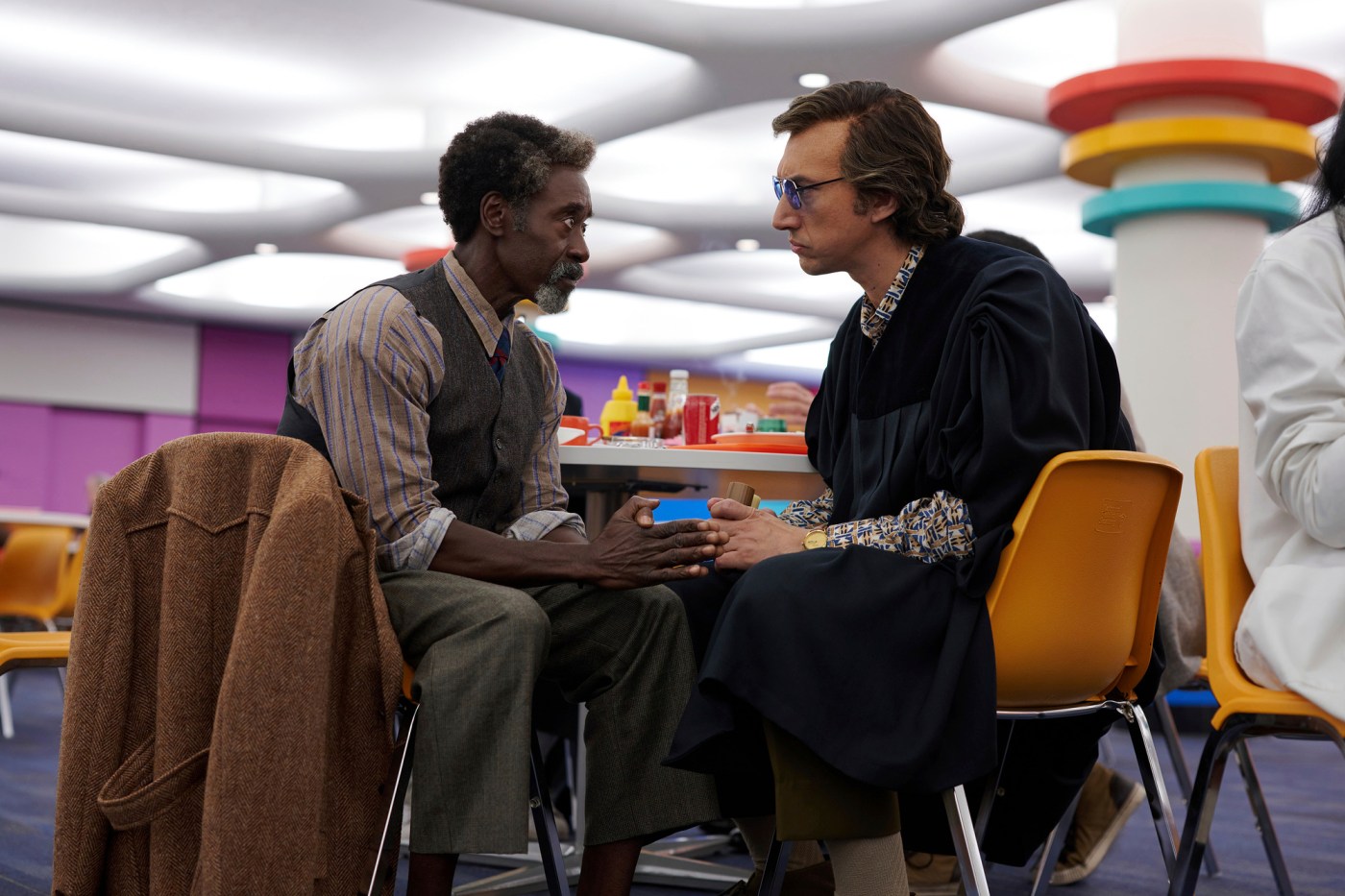 Like Don DeLillo’s 1985 novel, the heart of Noah Baumbach’s “White Noise” is in the supermarket. There, in the gleaming aisles of neatly arranged cereal boxes and produce, DeLillo found America’s church: an over-lit spectacle of abundance and artificiality. “Here we don’t die,” says Murray, the college professor, to the book’s protagonist, Jack, “we shop.”

Baumbach’s film is faithfully tuned to the buzzing dread and strange surrealism of DeLillo’s postmodern masterwork. This is true not only in the aisles of the A&P, where Jack Gladney (Adam Driver) and his wife, Babette (Greta Gerwig), contentedly stroll. Baumbach has also sprinkled grocery store products throughout the film. In the background of dramatic scenes sit Pringles, Sanka, Yoohoo! and other name brands like bread-crumb reminders of all that the supermarket represents: Inevitable doom covered up by linoleum floors and Tony the Tiger.

“White Noise,” which opens in theaters Friday and debuts Dec. 30 on Netflix, is a big swing at one of the great late-20th-century books. Both apocalyptic and comic, DeLillo’s eighth novel has proven acutely prophetic in its exhumation of the everyday dreams and dangers of American life. So much so that “White Noise,” as a story about an “airborne toxic event” filmed during the COVID-19 pandemic, could risk being almost too dead on.

But DeLillo’s rhythm and vernacular, here energetically adapted by Baumbach, remains intoxicatingly singular. Realism was never the point, and Baumbach’s lively, stylish “White Noise” wholeheartedly embraces the book’s dizzying, dense intensity. Baumbach, the New York filmmaker of “Marriage Story” and “The Squid and the Whale,” has usually mined his own life for drama, with the exception of a previous adaptation with Wes Anderson. (“Fantastic Mr. Fox,” which likewise culminated with dancing in shiny supermarket aisles. ) “White Noise,” made with a bigger budget and a touch of Spielbergian spectacle, is often riveting large-canvas filmmaking while still idiosyncratically personal. Crammed full with ideas and a giddy gloom, “White Noise” is a doomsday film too enthralled by the toxic absurdities of modern life to be dragged down by them.

“White Noise” begins in a talky, theatrical register. Baumbach is a natural when it comes to manic, mannered neurosis but less sure-footed in translating DeLillo’s darker, conspiratorial tones. It makes an initially awkward, overly frenetic fit here, though it’s understandable to want to stuff as much of DiLillo’s dialogue in as possible. And the antic style serves a purpose: Jack, a professor of Nazism at a Midwest college, has been speeding through life in a denial of his fate, ironically insulated even by his Hitler studies. But there are cracks in his comfortable suburban bubble. One daughter finds in the house an amber pill jar for a mysterious, unknown drug called Dylar.

“White Noise” surveys the embedded toxicity in American society. There’s the insidious creep of prescription medication. The kids — they have a houseful from their multiple previous marriages plus one of their own — flock to watch a plane crash on the television. At the College-on-the-Hill, Jack and Prof. …read more

‘The White Lotus’: The Most Suspicious Daphne Moments Pointing to Murder

Meghann Fahy as Daphne in ‘The White Lotus’ | Fabio Lovino/HBO “Bull Elephants” showed Daphne and Cameron not getting along. He was more focused on doing jet skis than going to Noto. Daphne decided to go to Noto anyway and took Harper with her. Later that night, Daphne revealed some disturbing things about Cameron. “Honestly, […]

SANTA CRUZ, Calif. — James Wiseman was in a Sea Dubs uniform, like the one he was wearing Saturday night, eight months ago. The main difference between then and now is that Wiseman was on an injury rehab stint in March. This time around is purely for developmental reasons. A lottery pick of Wiseman’s stature […]

‘Schitt’s Creek’: Annie Murphy Auditioned for Another Role in the Cast